After two days in Copenhagen we were on to O$lo, Norway. Just north of Copenhagen we caught the twenty minute ferry from Helsingor, Denmark to Helsingborg, Sweden. From there, most of the drive to O$lo was along the west coast of Sweden.

At the Danish port of Helsingor, as our ferry left the break water, we passed Kronborg Castle. Shakespeare used this castle as his Elsinore in Hamlet. 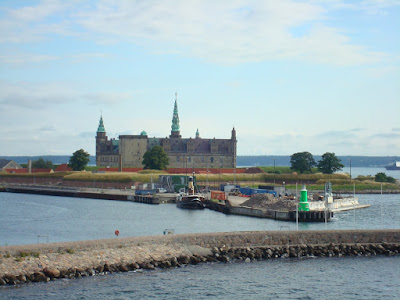 In Sweden, on the road to O$lo. 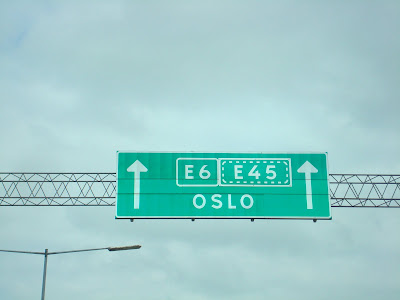 You may notice our unique spelling of O$lo. We figured that’s pretty appropriate since in 2009 it was rated the most expensive city in the world. Regretfully, it fell to the number two spot in a 2011 survey.

O$lo was established around 1070. Throughout its history the city had been destroyed a number of times by fire until 1654 when King Christian IV of Denmark ordered it rebuilt but with the new name of Christiania. In the early 1800’s, when the union with Denmark came to an end, Christiania (O$lo) became the capital of Norway. Not until 1925 was the city name restored to O$lo.

O$lo has a small city feel, especially in the city center just north of the harbor and it’s an easy walk to most of the major sight-seeing venues there or to hop onto ferries to take you across the bay to others. And, O$lo is expensive.

After the long drive and checking into our O$lo hotel we needed a little refreshment. Two pints of the local lager, $22. 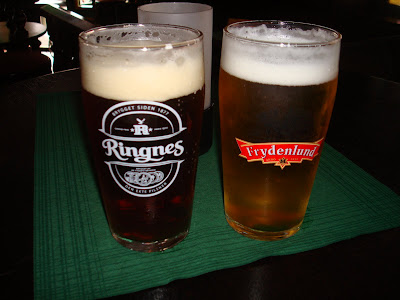 The harbor in the O$lo fjord. The Akershus Fortress sits on the bluff above the harbor. 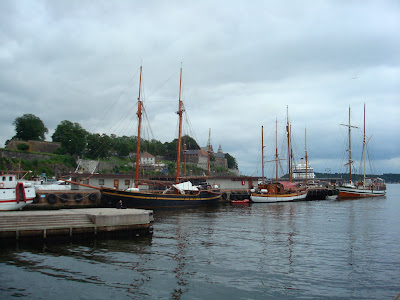 We're on a ferry to the opposite side of the harbor. The O$lo harbor with the O$lo city hall in the background. City hall is where O$lo presents the Nobel Peace Prize each year. 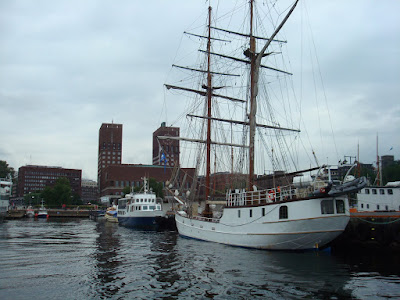 Aker Brygge behind the boats in the harbor. Aker Brygge is a former shipping and industrial area of O$lo which has been renovated into a modern eating and drinking area. 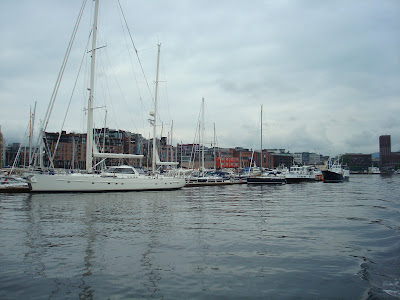 The Viking Ship Museum in the Bygdøy area of the city which is across the harbor from the city center. 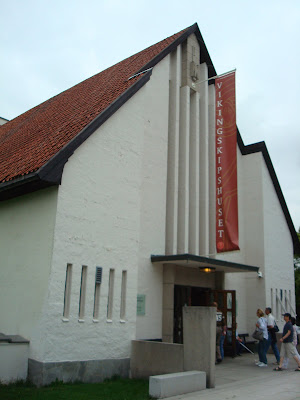 The Viking Ship Museum contains three ships that were discovered in the late 1800's and early 1900's. Each ship was found in a burial mound. This is the Oseberg Ship. 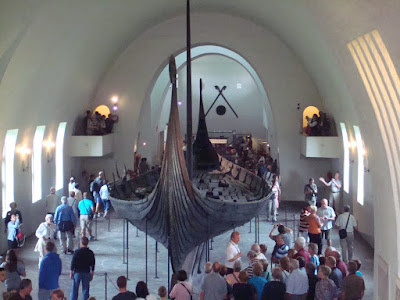 Jeff said he's in his ancestorial home. He's half German, half Swedish. So, even though we're still in Norway, he felt his Viking blood flowing. 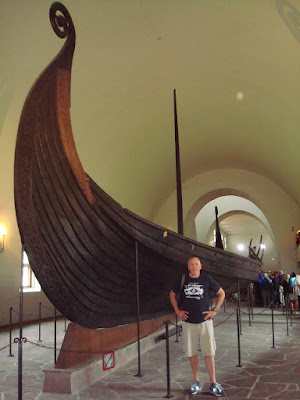 The bow of the Oseberg Ship, or was it the stern? They both look the same. 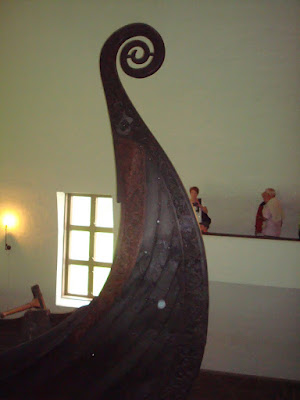 Now at the Fram Museum. Fram was a very famous Norwegian ship built to explore the colds of the Artic and Antartic during the late 1800's and early 1900's. Fridtjof Nansen was the Norwegian explorer that gained international fame on the Fram. 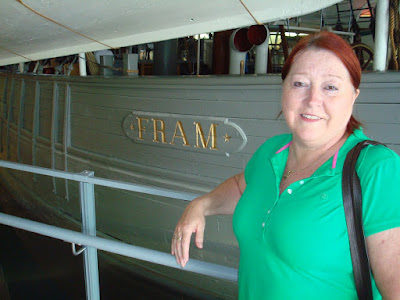 On board the Fram. Norway has built an enclosed museum which houses the Fram and tells the stories of a its amazing adventures. 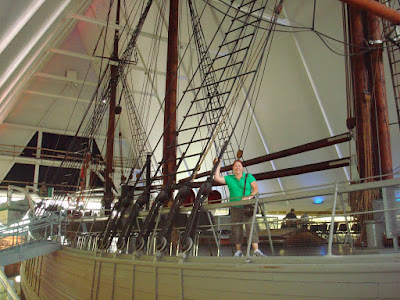 More of Jeff's Viking blood. At the helm of the Fram. 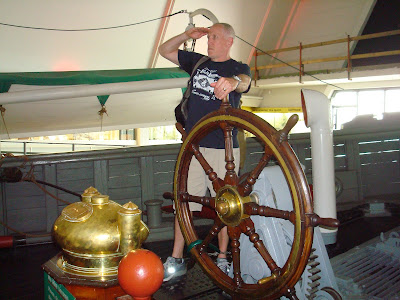 After catching the ferry back across the harbor, time for refreshment again. At the Beer Palace in Aker Brygge. A new champion of the absurdly expensive, I'm sitting there with two pints of local lager, $36. 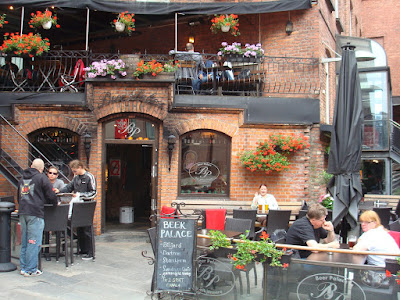 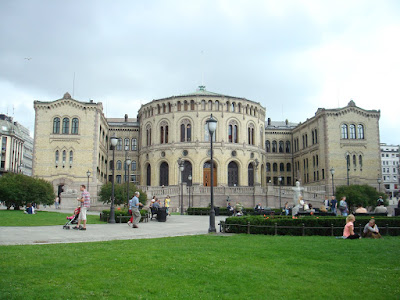 At the opposite end of city street Karl Johans gate (that little "g" is how they spell it) from the parliment building is Slottet, the Royal Palace of Norway's monarch. 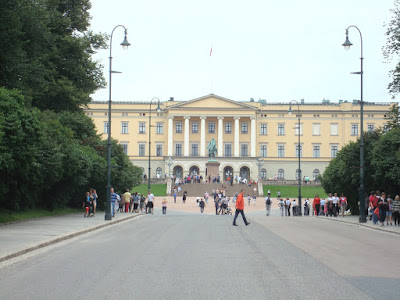 A guard at the royal palace. One man's goofy tassle is another man's manhood. 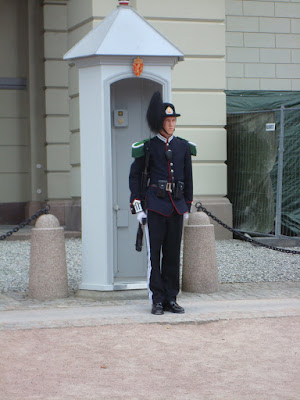 The Vigeland Sculpture Park is a short tram ride west of the city center. It contains the 200+ bronze and granite sculptures created over twenty years by Norwegian artist Gustav Vigeland. All the statues are of men and women, of various ages, children and even babies, all nude, mostly involved in daily activities but some quite abstract. This is looking west from the bridge. 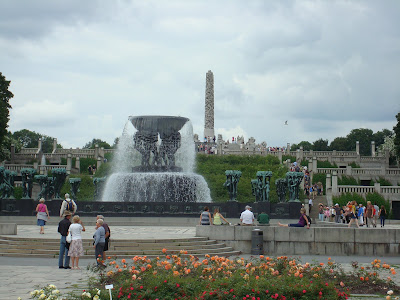 The Vigeland Sculpture Park looking back to the east. You can just make out the bridge with its 58 bronze statues. 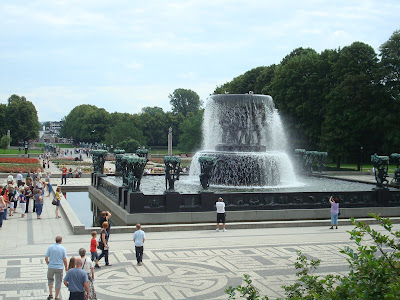 This monolith is almost 50 high and has 121 individual figures, men, women, children and babies, that appear to all be trying to get to the top. It took three stone carvers 14 years to complete. 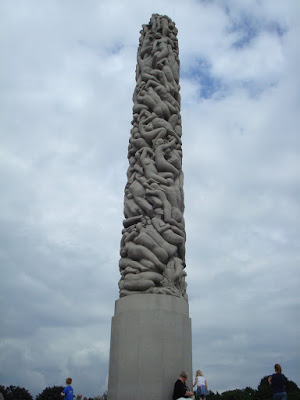 Some of the figures around the monolith. They form a circle of life, from very young to quite old. 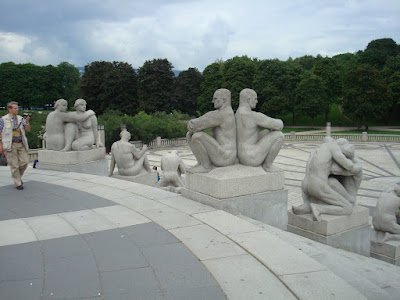 One of the bronze statues at the bridge. Not sure what it's called but I don't think this guy likes kids. 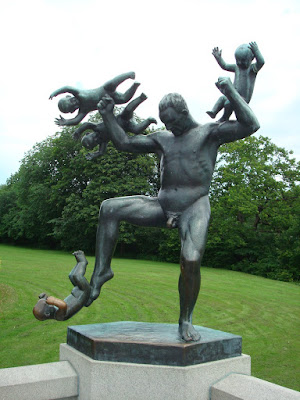 The Angry Baby is the most famous, individual statue in the entire park. 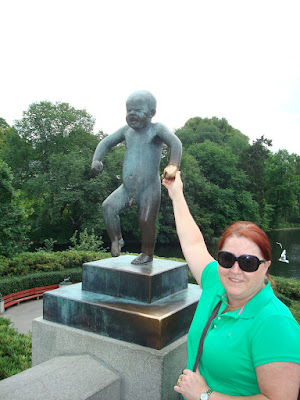 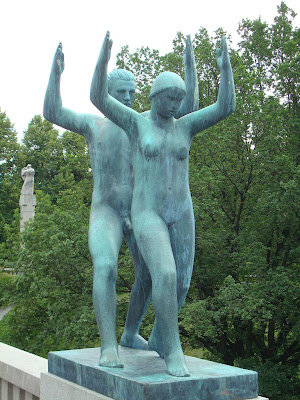 After all that art, one last Norwegian beer. Jeff's drinking this one for his friend Borg. 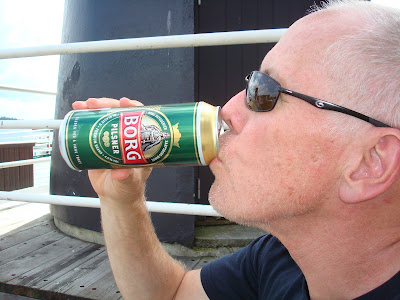 Well, so far the Scandinavia trip has been fun. A couple bumps in the road; no hot water in Copenhagen and obscenely expensive in O$lo. But, we're so happy we made the trip and have seen and done the things we have so far. On to Stockholm!!
Posted by Sandy and Jeff at Monday, July 11, 2011