Man, we needed a Munich fix. Hadn’t been there in seven months. So Jeff and I left after work on Friday and made the four hour drive to the city. Checked into our favorite Hotel Schlicker and then walked through the Marienplatz to a relatively new beer establishment in the city center.

One of our favorite places in Germany is Kloster Andechs which sits on a hill about a half hour southeast of Munich. Because it consumes most of the day to get out there and back we can’t always visit the Kloster when we go to Munich. Now, however, there’s a great alternative just around the corner from the Marienplatz. Andechs has opened Andechser am Dom at the foot of the Frauenkirche, the famous, large, double-domed church in the city center. Now you can get all their great beers right in the heart of the city. 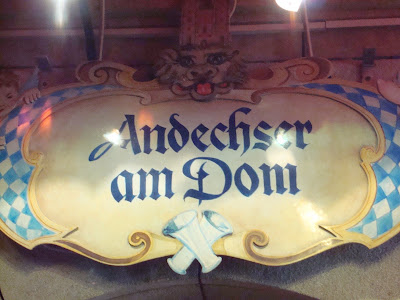 Jeff drinking the flagship brew of Kloster Andechs, Doppelbock Dunkel; considered by many beer experts to be the best beer in the world. Had a fun evening at our table talking with a native Münchener, Ed. He loves the U.S., has a house near Sarasota, Florida (he spends most of his time in Germany though), drives a Corvette and can't understand why we enjoy Germany so much. 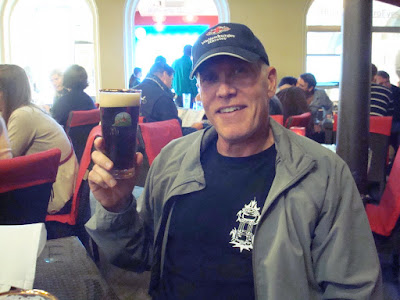 Next morning, Saturday, we’re in the world famous Hofbräuhaus for a traditional Munich breakfast. 1000 (10 AM) bring it on! 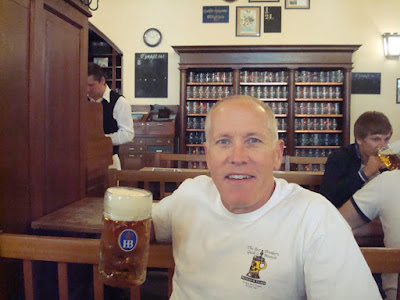 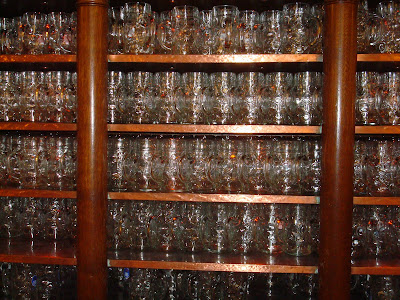 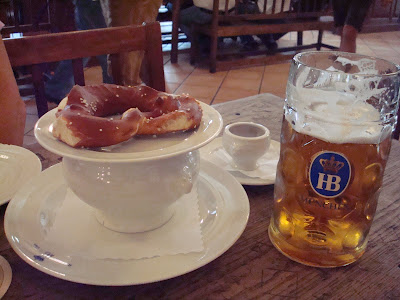 How to circumcise a weißwurst (white sausage).

On the west side of Munich is the world’s largest biergarten, Hirschgarten. The biergarten is on the north side of a park with the same name. Outside, Hirschgarten sits 8000 people. In their gasthaus another 320 can sit in beautiful Bavarian décor. 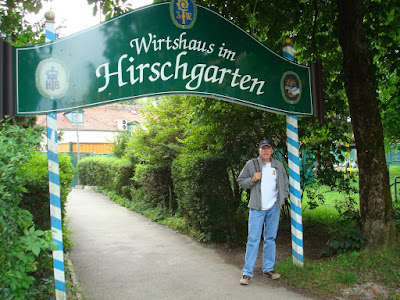 They serve Augustiner, one of Munich’s “Big Six” breweries, at Hirschgarten. Many consider Augustiner the best beer made by any of big Munich brewers. 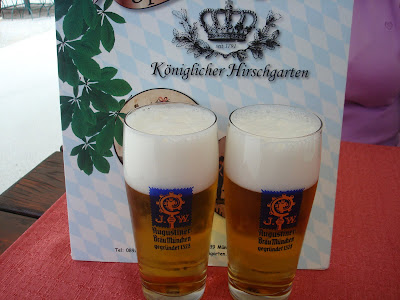 Huge, it sits 8000. The table outside seem to go on forever. They have a nice playground for kids and an enclosed deer and goat area. 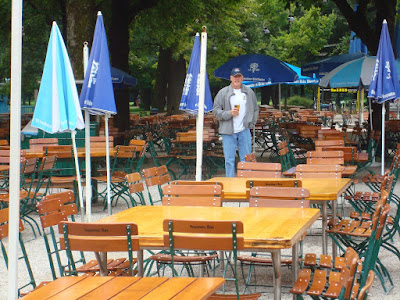 Next stop, just a short tram ride away is the Augustiner Keller. It’s another very large biergarten seating 5000 and is heavily shaded by large chestnut trees. 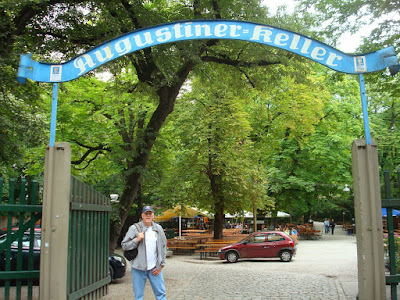 One of the bier stations at the Augustiner Keller. Poured right out of the wooden keg. Just right of the keg is the round hammer used to tap the keg. Our beers await. 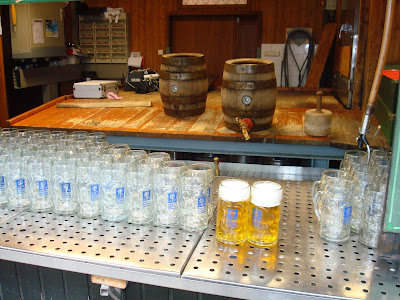 Perfect, half a chicken with spices and herbs to make it something special. Hey, they serve Augustiner here too. 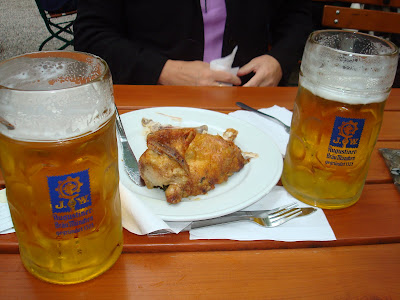 We arrived at the Augustiner Keller around noon but because it was a bit cool, 60 degrees, overcast and, although it never happened, rain was threatening. So this video shows an interesting view of a near empty biergarten.

The J. W. on the Augustiner sign is for Joseph Wagner, who took over the brewery in 1862. The J. W. on the new hat stands for Jeff Wickstrom. Always one of Jeff's favorite beer logos. 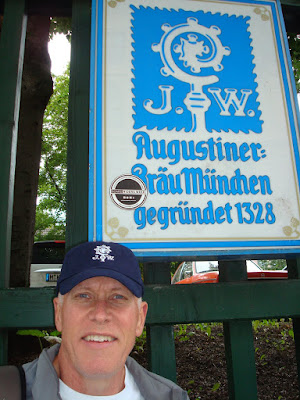 On the west side of Munich's English Garden is Osterwaldgarten. Small it only seats 350 outside but a very nice place. Inside the gasthaus it's quite pretty. 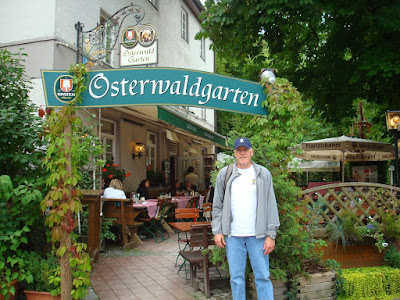 They serve Spaten at Osterwaldgarten. 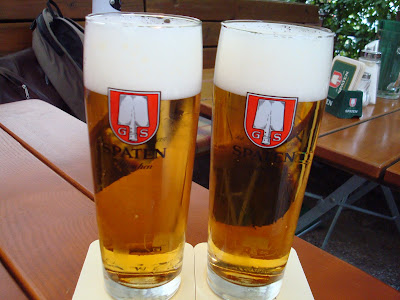 Our last beer garden of the day. With a visit here we have accomplished a lifetime achievement of visiting all four beer gardens in the English Garden; Chinesicher Turm, Seehaus, Osterwaldgarten (just visited), and now the Hirschau. 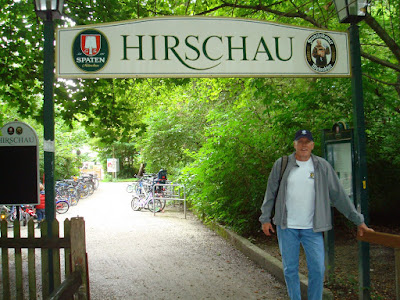 Breakfast at the Hofbräuhaus and now for the evening meal there too. Great seats in front of the band and, typically, we met some great German folks to spend the night with, Ober and Vonne. 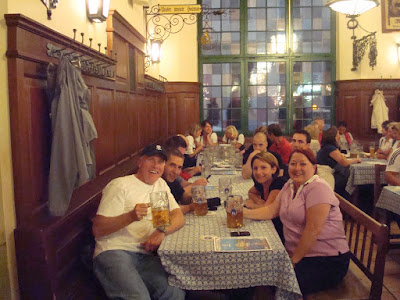 A nice German band at the Hofbräuhaus. Interestingly, the clarinet player and the accordion player were both blind.

End of the night in front of the Hofbräuhaus we ran into a real a dick. Actually, it's a bachelor party and he's the groom. 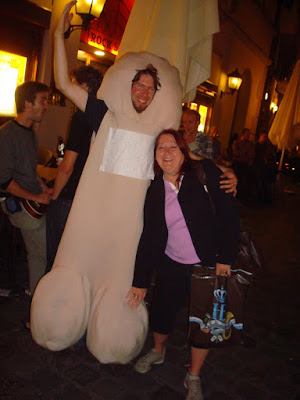 Munich is always soooo much fun!! Great places to visit (yes, we've done all the museums, churchs and palaces), intriguing history, amazing places to eat and drink, and wonderful people to meet and talk to; can't ask for more than that. One more little item to discuss about Munich in the next blog. PROST!!