After two days in O$los we drove all the way across Sweden to Stockholm on the country’s east coast. It’s a beautiful drive, quite similar to northern Minnesota, Wisconsin or the Upper Peninsula of Michigan. Gee, no wonder all those states are full of Scandinvians. Even saw a few moose.

The first mention of Stockholm comes from around 1250. The original settlement was on an island in the harbor which is now the old town of the city known as Gamla stan. Stockholm became a powerful and influential trading city and, as result, the country of Sweden became a major European power in the 17th century with the city becoming the country’s capital in 1634. After a plague in 1710, winter put that to an end, and the country’s defeat to Russia and Denmark-Norway in the Great Northern War, the city went into a decline. However, in the late 19th century and through to today, Stockholm again became an important economic center. Now, the city is considered a leader in social, ethical and technological advances. Plus, it’s cheaper than O$lo.

At the border crossing from Norway into Sweden. Yeah, that's Swedish for Sweden. Why can't we just all use English. Very pretty drive through Sweden. Even saw three moose. 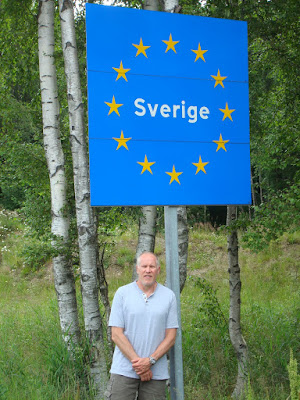 Made it Stockholm. Really pretty city. It's the largest city in Scandinavia and it certainly has a big city feel. 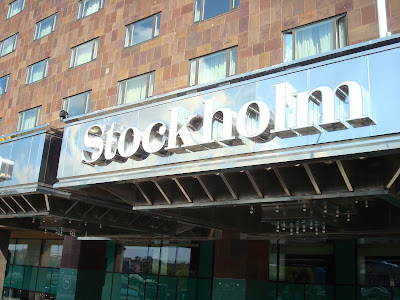 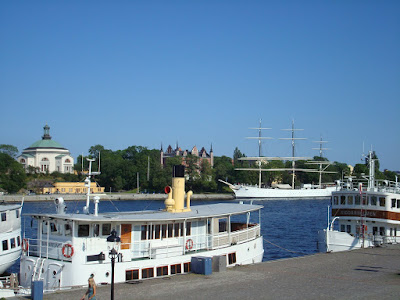 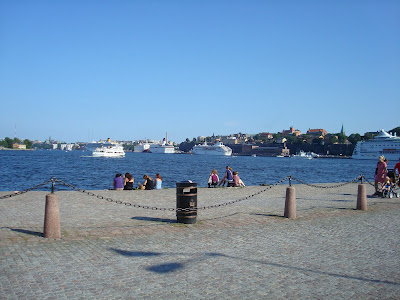 The oldest pub/restaurant in Stockholm in the old town part of the city known as Gamla stan (small S is how they spell it). Den Gyldene Freden opend in 1722. I'm there in the middle checking my iPhone. I inadvertantly left my purse behind here. Got back about a half hour later and, luckily, they had it. Only the third time in 28 years though, not too bad. 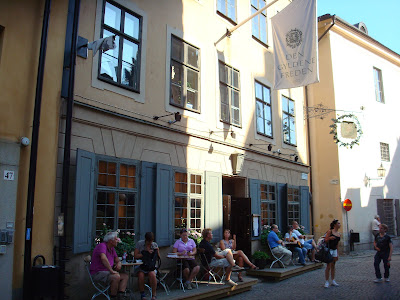 We haven't said much about the food on this trip but we tried to enjoy the local faire wherever we went. Here in Stockholm Jeff had Hotch Potch, Swedish hash. I had Fish Soup. Both very good! 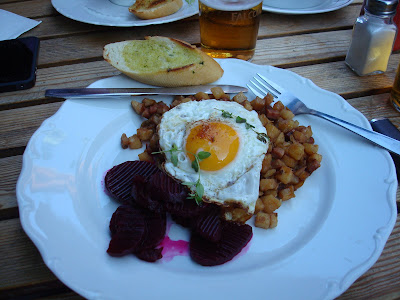 We did a Hop On, Hop Off tour of the city. A typical American tourist. Although I'm the only one that wore their seat belt.

The Swedish Royal Palace. Larger than Buckingham Palace in London. 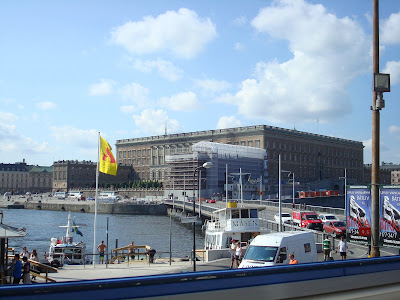 It seems like all the kings of Sweden were named Gustov. This is one of them. 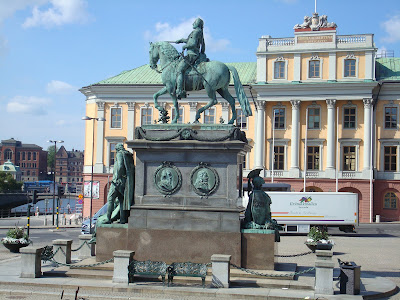 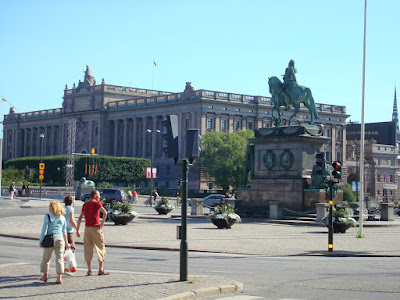 Arches at the back of the Parliment building leading from Gamla stan to Drottninggaten, a major shopping area of Stockholm. 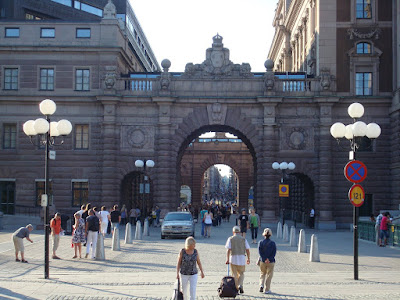 Stockholm city hall. Not many city halls with a light house. 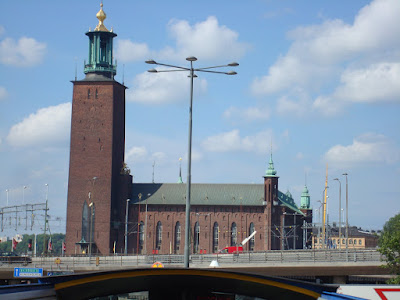 Gamla stan from across the Stockholm harbor. Gamla stan is the old city of Stockholm with narrow streets and very old buildings. 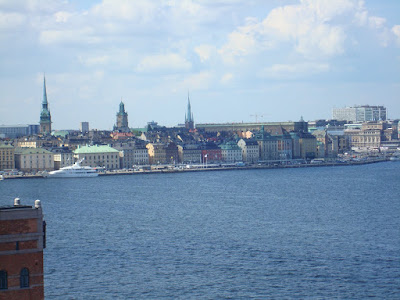 The Swedish Mariner Museum on the left and, on the right, the connected red and brown building behind the masts, the Vasa Museum (more on that later). 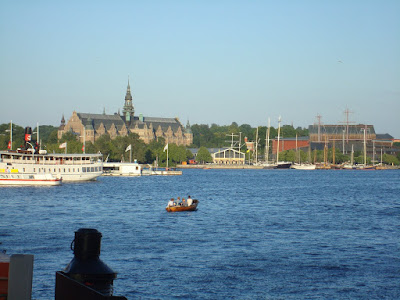 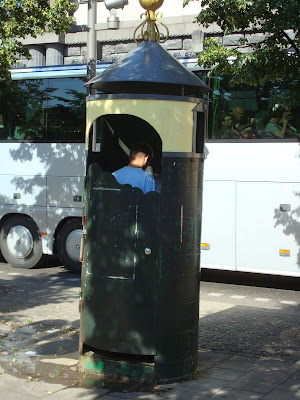 Free public pressurized air for bike tires. No where near the number of bikes as Copenhagen, or, although there were bike paths everywhere, no where near the organized flow of bike traffic. We almost got run over a few times here in Stockholm. 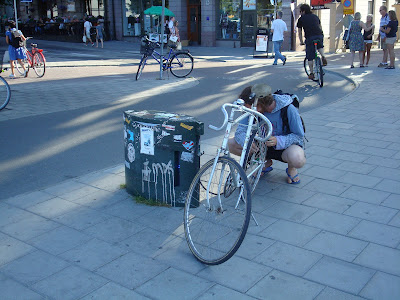 At the Vasa Museum. Vasa, the pride of the Swedish navy back in 1628. On August 10, 1628, ten minutes into its maiden voyage, a comedic tragedy, or a tragic comedy, occured when Vasa capsized and sank to the bottom of the Stockholm harbor. The story of the Vasa mishap, how it was recovered and refurbished is truly amazing. The Vasa museum was probably the highlight of our entire Scandinavia trip. 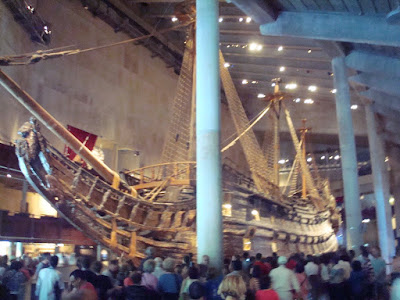 A 1/10 scale model the the Vasa warship. It shows how colorful and ornate some battleships were during the period. 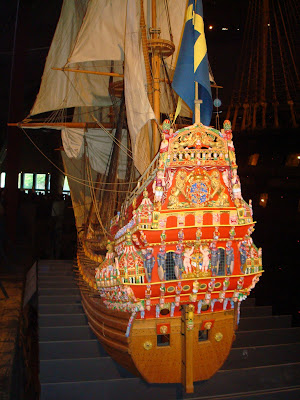 Vasa is 95% original material. Because it was covered by the silt and mud at the bottom of the harbor it was preserved virtually intact. It's location was discovered in 1956 and raised in 1961. It was moved to its present location in 1990, a huge building that is air conditioned, de-humidified and rather dark to protect the ship in its present condition. That extention area around the corner of the stern were officer quarters and very colorful and ornate. You can see people on the different levels. That will give you idea of just how big the Vasa is. 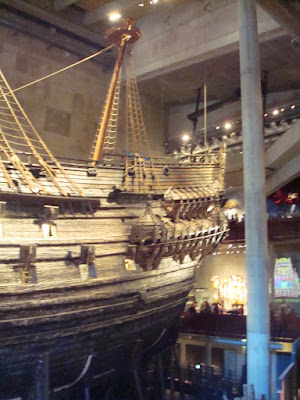 Up on the third viewing level the stern of the Vasa is still high above us. At the top you can see two griffins placing a crown on Sweden's king at the time, Gustavus Alophus. At the bottom is the king's family coat of arms. The king was involved in the 30 Years War at the time and was in Poland awaiting the arrival of the Vasa when it set sail but sank in the Stockholm harbor. The stern at this point is about 20 feet wide. 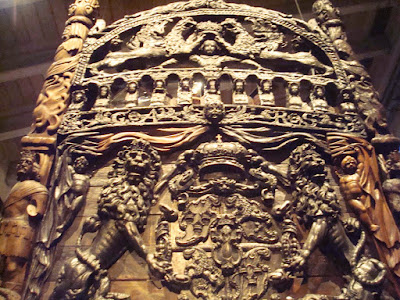 Although it was a tragedy for the Swedish country and its navy to lose the Vasa it ended up being a blessing for the country and the world. There is no other fully intact man-of-war from the 17th century. It has revealed the the building techniques used on these ships and, of course, now earns millions of krones for the Swedish people. 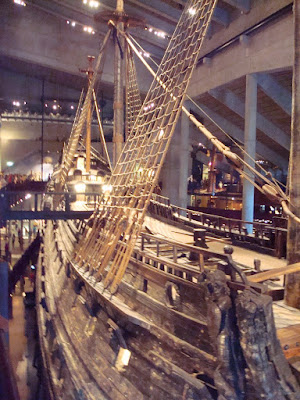 You may be wondering why the Vasa capsized and sank. It had an inherent design flaw. It wasn't built wide or deep enough. The Vasa was the first man-of-war designed by the Swedes with two cannon decks. Since the width and depth of the ship weren't adequate, not enough ballast could be placed on board and so the ship was top heavy. It's believed that more ballast could have been put into storage areas but that have resulted in the bottom cannon deck being below the water line. On the day of the tragedy Vasa only had four sails up and had already tipped dramatically twice before, on the third time, it capsized to the point where the open cannon ports began taking on water. Once that happend the inevidible happened and the ship rapidly sank to the bottom of the harbor. There were about 450 men on board, 100 sailors and 350 soldiers. 20-30 people were killed. 1000's of Stockholm citizens stood on shore and watched the Vasa tragedy.

OK, that's it. Copenhagen, O$lo and Stockholm complete. What a wonderful experience. Just the long drive home to Germany. But, one more stop along the way. Rostock.