The German wine festival season is warming up.

A half hour northeast of Kaiserslautern is the small wine town of Einselthum. When we were stationed here in Germany during the late 80’s and early 90’s Einselthum was one of the favorite winefests of the summer. They had a rather unique format for their annual wine event. For 10 Deutsch Marks you got a .1 liter glass, complete with the unique Einselthum design, and a coupon sheet that allowed you to get a .1 liter sample of wine from ten different Einslethum vintners. The Einselthum winefest became extremely popular and, although a small village, the crowds were quite large with a good portion being American. So, not having been to Einselthum in twenty years, Jeff and I had been looking forward to this year’s festival which was scheduled for 15-17 July. We were so excited that we invited a number of friends to meet us there at 1700 (5PM) and share the fun.

Well we arrived at 1700, parked on the edge of town, met our friends and walked into the village. It was nearly dead. We did quickly come upon one vintner station that was just starting to open. We had some wine and a little cheese plate. Walking up the street a couple blocks there was another festival area. After a wine sample there we continued on a short distance to the opposite side of the village and found a third and the last area; good wine and food though. So just three festival areas instead of ten, one bumper car ride instead of a carnival area, certainly no crowd, just locals and we were probably the only Americans.

At the first festival area on the west side of the village; Harpo, Jeff, Mike and Dan. Mike is our neighbor in Colleyville, TX. He and Dan were on an American Airlines layover in Frankfurt and came down to meet us for the winefest. 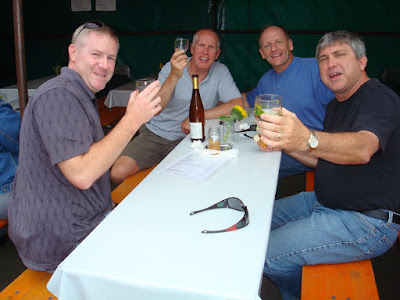 We certainly had a fun time with good wine and good food but we were puzzled as to why there was such a change. Later in the night we had a nice conversation with some local Germans and asked them how the past became the present. They told us the crowds had gotten so large and there had been problems at other festivals with skinheads causing fights with Americans. That got the village a little concerned. They consciously decided to cut back. Instead of 10 vintner stations, they would have just the three we saw and each separated by a few blocks. They would not advertise either. So over time the Einselthum winefest drew fewer and fewer people, fewer and fewer Americans, until it was attended mostly by just the local Germans.

One of the three remaining festival areas in Einselthum. It was inside this vintners courtyard; very nice atmosphere and fun people. Outstanding wines and great food!! 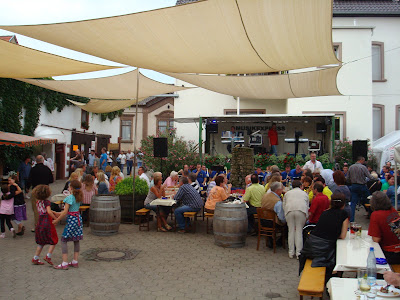 So that was Einselthum. The good thing though, the winefest season marches on.
Posted by Sandy and Jeff at Monday, July 25, 2011