A friend of ours from Texas, Mike Franklin (Porker), worked an American Airlines flight into Frankfurt last weekend so we drove up to Mainz to pick him up at their layover hotel and then spent the afternoon in Wiesbaden. The planned events of the day were to visit some beer gardens and ride the Nerobergbahn (Nero hill train).

After picking up Mike we drove from Mainz over to Wiesbaden to have a bratwurst and beer at Walters. Walters is a long time imbiss that’s across the street from the old USAFE Wiesbaden hospital and the Amelia Earhart military hotel. Both of those establishments are no longer in US hands but for those of you that were stationed at the hospital or Lindsey Air Station, you’ll remember Walters;. still the same quick, quality German food.

From Walters we drove out into the countryside just east of Wiesbaden to Hockenberger Mühle, a wonderful restaurant and beer garden. What could be better than sitting on the edge of the forest, talking with old friends and drinking a crispy German beer?

Mike and I at Hockenberger Mühle beer garden. 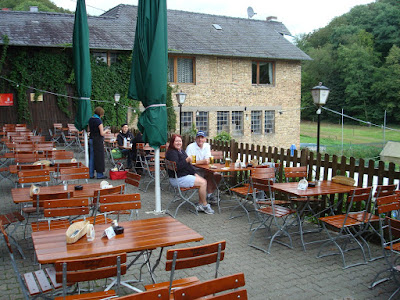 Back into the city, we parked at one of Wiesbaden’s many parks and walked to the bottom station of the Nerobergbahn.

How can this happen? In the park on the way to the Nerobergbahn. 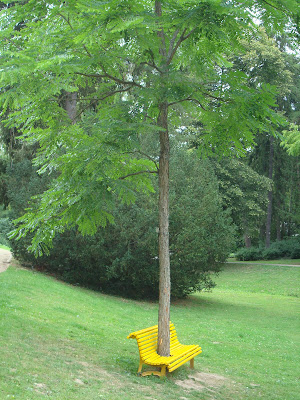 The Nerobergbahn is a funicular railway which is a train with two cars connected by a cable that move up and down steep embankments where the weight of the descending car counterbalances and pulls the ascending car up the hill. The Nerobergbahn is one of the few water powered funicular trains in the world. After a car reachs the top station, 7000 liters (1800 US gallons) of water are pumped into the a reservoir in the car. At the same time, at the bottom station, the same amount of water is released from that car. That water will be pumped back to the top for use there. Once the passengers are loaded and the brake is released the weight of the car at the top will cause it to begin rolling down hill and simulaneously pull the lighter car at the bottom back up the hill.

The bridge from the bottom station of the Nerobergbahn to the side of the hill. A lot of work to get up a hill to another park. The Nerobergbahn was built in 1888. The city had planned to convert the train to electricity prior to WW II but that was put on hold for the war. From 1944-48 it was inoperable do to war damage and when it was repaired the city never again considered a conversion to electricity. The average gradient of the track is 19% with a maximum of 26%. 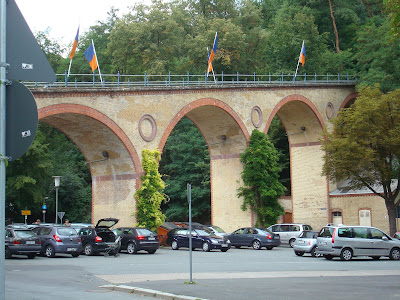 At the bottom station of the Nerobergbahn and one of the two cars. 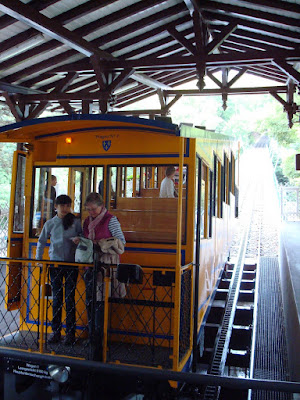 View from the top. Germans like to lay around on the grass. The top of the Neroberg (Nero Hill) is a park area. Very nice. 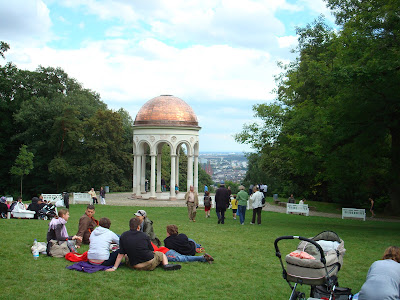 A little down the hill at a viewing point. A nice view of Wiesbaden with the red brick Marktkirche. That's where we'll be heading next, right next to the city Rathaus and it's beer garden. 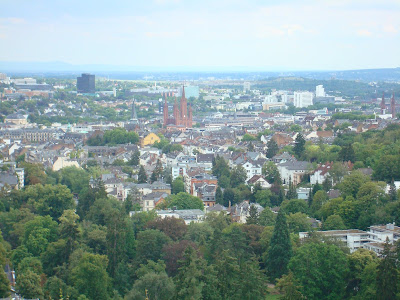 WWI Memorial at the top of Neroberg. 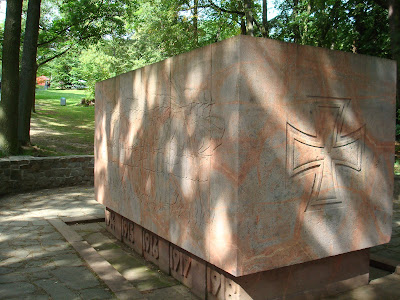 An outdoor performing arena at the top of the hill. There was some performing art going on. Of course, it was in German but you could tell it was art. At least that’s what Jeff said, “Art is kind of like pornography, you’ll know it when you see it.” 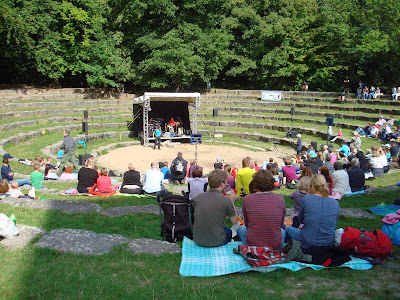 On our way back to the bottom of Neroberg. 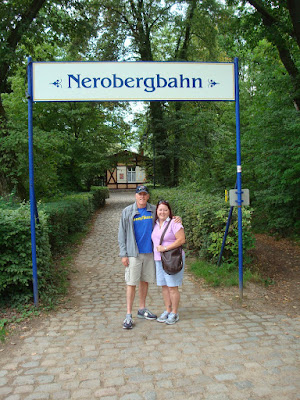 A car coming up to the top station. 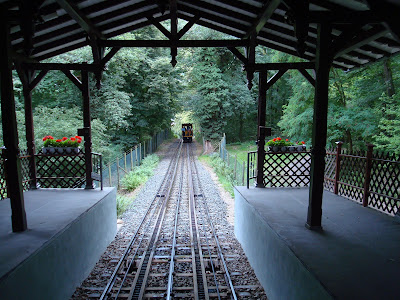 A good view of the track. You can see that the middle rail is shared by both cars. Half way down, the tracks split so that the cars can pass but otherwise this is the track layout. On the left you can also see the steel cable that is attached to both cars and will pull the ascending car and lower the descending car. The Nerobergbahn is 1440’ long, and so, of course, is the steel cable. Up ahead, it kind of looks like the track just drops over the side. 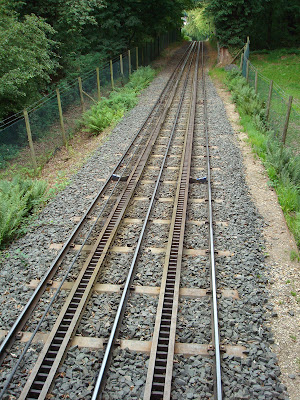 Video on the descent. It takes 3.5 minutes for the cars to go from one station to the other but we cut out some to shorten it. You can see the cars pass in this video. At the very end you can hear as we pull into the bottom station and, almost immediately, water is released from the car.

Water releasing from the bottom car.

Seeing the houses around the park also made the walk to the Nerobergbahn well worth the trip. Wiesbaden is a very wealthy city and homes like these are common and indicative of well-to-do people, both past and present. 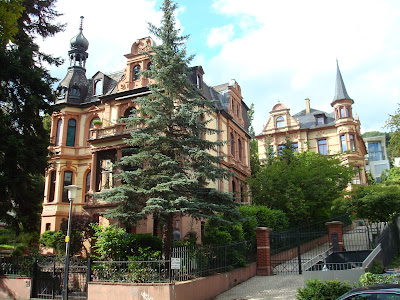 Our final stop of the day/evening was the Wiesbaden Rathaus beer garden. After some delicious Kloster Andech Doppelbock Dunkel we walked down into the Rathaus basement restaurant for some excellent German food.

Mike and Jeff flew A-10’s together 27 years ago in the 511th Tactical Fighter Squadron at RAF Bentwaters, UK. Man, they didn’t wear those cheater glasses back then and they certainly had more hair. Well, in at least in Jeff’s case there was more hair. 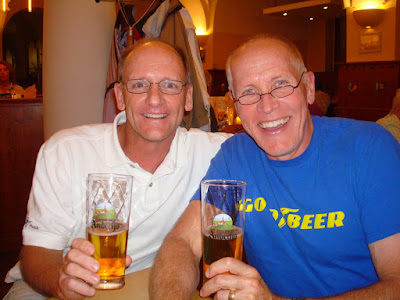 All the goals for the day were accomplished; beer gardens and Nerobergbahn. Both, along with seeing a close friend, made the trip to Wiesbaden a very good day.