Jeff and I are on a multi-city tour in Scandinavia. Our first stop, before taking the ferry across from Germany to Denmark, was to spend the night in Lübeck. This city is north of Hamburg and only a short drive to the Baltic coast. We learned that Lübeck was a major city in the Hanseatic League, which, probably just like you, caused us to ask, "What the heck is the Hanseatic League?" Well, it was an commercial alliance of a number of northern European cities from the 13th to 17th centuries. They were more than a trading organization though. They also had a military presense to protect their interests. The Hanseatic League was also called Hansa and that term still exists today in names like Lufthansa.

Beyond all that Lübeck was a pretty city with an old town that exists on an island in the Wakenitz River. Here's a couple images of Lübeck.

Holstentor is one of the two remaining medieval city gates. It is the symbol of Lübeck and one of the most famous images in Germany. 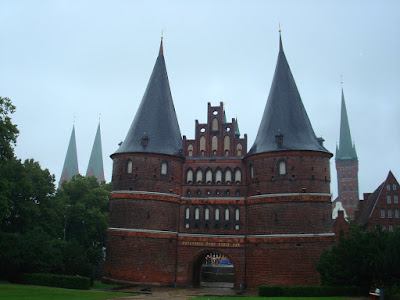 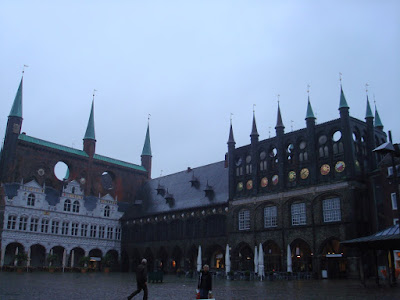 Well, it was a quick stop and a real bonus to our trip. Next stop, after a good nights sleep, Copenhagen, Denmark.
Posted by Sandy and Jeff at Wednesday, July 06, 2011