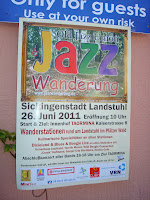 Last Sunday we participated in the Jazz Wanderung (walk). They’ve been doing this for a few years in Landstuhl which is a small city across the autobahn from Ramstein Air Base. It’s a ten kilometer walk through the Pfälzer forest around the city. From the starting point at the Taormina restaurant in Landstuhl, about every 1.5 kilometers is a refreshment area (yes, beer, wine, some pork) along with a jazz duo or full up band. The event kicked off at 1000 on Sunday morning, which is when we were invited to join a group of friends. Luckily, we had not committed to being there because we had a rather late night Saturday, followed by a late and slow get up Sunday morning. Actually, we had decided not to go but after Jeff left for his run at 0900, I dragged myself out of bed and got ready to go. Now, this wasn’t any sudden burst of energy but a very slow process which finally allowed us to leave the house at 1130 and arrive at the start point at noon. 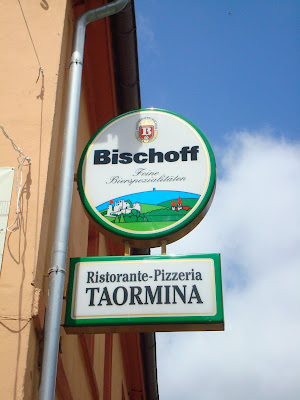 Of course, our friends had already pressed on so we paid our entry fee and pushed off from Point 1 to catch up. Terrain was steep, temperatures in the mid 80’s; maybe this wasn’t a good idea. We were so late at Point 2 that the band had already stopped playing but we got some water and a brezel each.

On to Point 3. Good grief!!! Here the terrain was freaking steep and very, very long! This definitely was not a good idea. Mercifully, we found Point 3 at the very top of the ridge line, high above Landstuhl. A jazz duo was playing, Yannick Monot & Helt Oncale. Selzer water for me, beer for Jeff. At this point we made a tactical decision. We’d walked about one-third of the route. If we were going to catch our friends we needed to go cross-country and cut from Point 3 to Point 5.

Here's the path between Point 2 and Point 3; very long and steep. The shade was nice but it was a quite warm day, in the mid-80's. 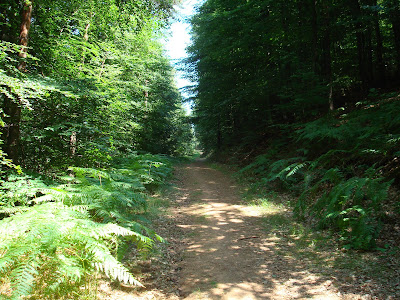 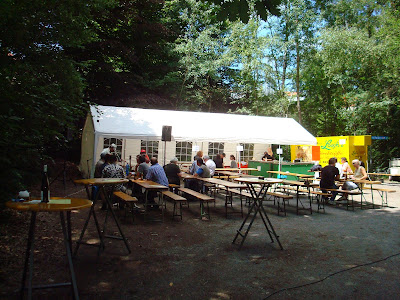 iPhone to the rescue, no problem for a mostly direct route from Point 3 to Point 5. Point 5 returned us to civilization taking us to Café Goldfinger in Landstuhl. Couple beers and sandwiches, fun music from the Speyer City Stompers, until they quit at 1500 (3PM), but no friends. The final stop returned us to the Taormina restaurant for the grand finale. No friends there either so we got a spot in the shade, couple beers and listened to some jazz. 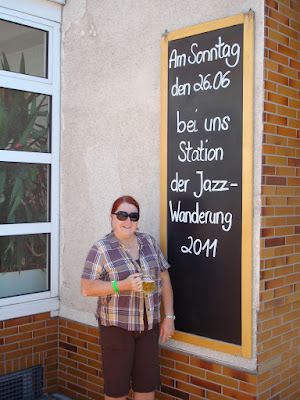 Speyer City Stompers jazzing. Jeff got a little carried away at the end of the video.

Shortly after the music started at Point 6, which was also Point 1, our friends showed up, hot and tired. They had spent most of the afternoon at Point 4 which we bypassed in hopes of catching them. More bad planning on our part. Well, it all worked out.

Back to the last stop, Point 6, which was also Point 1, Taormina restaraunt. 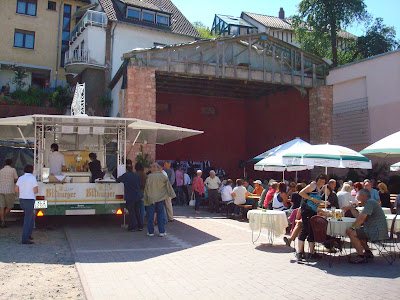 All the jazz guys got up on stage for the big finale. Of course, most of the jazz songs we heard during the day were American jazz. You might recognize this tune.

Fun times with friends and music, the Wild Boogie Connection was quite good. Looking forward to Jazz Wanderung 2012 but Jeff and I will have a better plan next year. Like get up on time, easy night before, stuff like that.