There’s an interesting, new bridge east of Kaiserslautern, built during the last year, which crosses over the A-6 autobahn. Interestingly, there’s no road there to cross the autobahn, no railroad tracks, not even a human foot path. This multi-million Euro bridge was built for the wild animals of the forest. That’s right; the Germans built this bridge so that animals have a place to cross the autobahn without the fear of ending up as road kill. I’m really not sure how they determined that this is where the animals wanted to cross but I’m certain they put a lot of thought into it. Most assuredly, they’ve also built high fences along both sides of the highway to keep animals off the road so I suppose a persistent creature could be funneled to this point if it was determined to cross over. This bridge was built at the crest of a hill, which requires the animals to make a long, uphill trek before they can cross; that seems kind of inconsiderate. 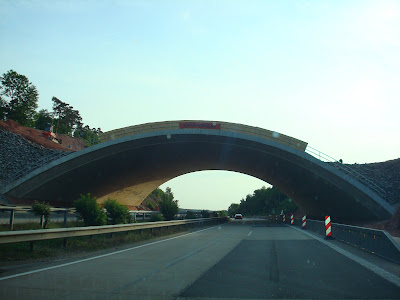 Well, I’m happy for the deer, the wild boar, rabbits, squirrels, probably even moles and some newts. Now, this isn’t some little foot bridge. It’s at least 100 feet wide so they must be expecting some heavy four-legged traffic. Constructed of thick concrete with a covering of natural soil and plant life they built this cross-over so that the animals will be safe and happy. Honestly, I think this bridge could easily handle a caribou migration.

Since there doesn’t seem to be any money concerns here I have a couple ideas that would make this bridge even better for the creatures of the forest. First, since this bridge is at the top of a hill, I think it would be a good idea to build escalators up to the bridge. You wouldn’t need a down escalator, after all these are animals, they can at least walk down the hill. Second, at the top of the hill I suggest placing one of those universal signs that tell all the animals that this is a predator free zone. They’ve got to have this or all the animals that prey on others will figure out that this is a funnel point and they’ll just hang around either end of the bridge waiting to pounce. As mentioned, it’s got to be a universal sign too; one that can be understood by any animal. Of course, most of the creatures crossing the bridge will be German animals but, who knows, a French deer could wander over here or a Kenyan zebra might escape the Frankfurt zone; they wouldn't be able to read a German sign.

I'm sure there's a lot more that can be done to help the animals. The bridge, escalators and warning signs are just a start.
Posted by Sandy and Jeff at Wednesday, June 15, 2011