The second day of our Scandinavia tour we caught the 0845 ferry from Puttgarden, Germany to Rodby in Denmark. After the 45 minute crossing it was a leisurely, Sunday morning drive into Copenhagen.

Jeff and I at the ferry port in Puttgarden, Germany. It's about 0815, a dreary, drizzly day. 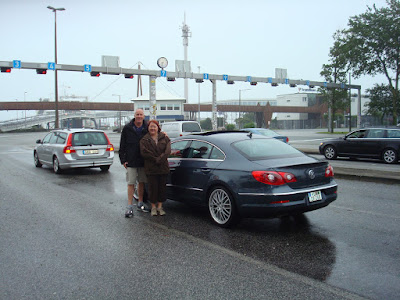 On board the ferry, bound for Denmark. 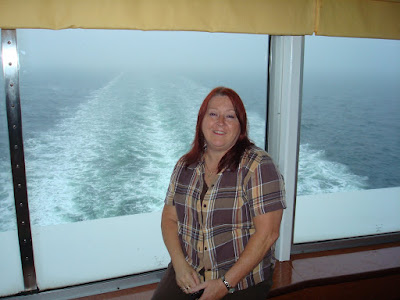 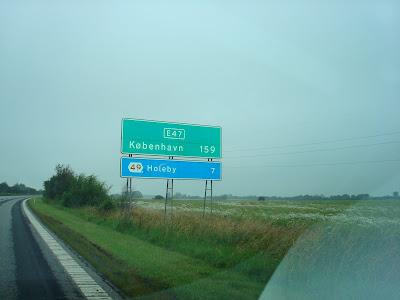 Copenhagen (Danish: København), not too surprisingly, means ”merchants’ harbor.” A settlement of some sort has existed here since the late 1100’s. It became the capital Denmark in the 15th century and, as a Scandinavian state, it shares a long history with both Norway and Sweden; some as an ally, some advesarial. Throughout that history Copenhagen has bourne the brunt of attacks by the Hanseatic League and Great Britian and occupation by Nazi Germany. Today it’s considered to have one of the best qualities of life of any major city in the world and their citizens some of the happiest. 36% of all Copenhagen citizens commute to work by bicyle.

Since it was only 1130 the morning we arrived, and we were passing right by it, we stopped to see the Carlsberg brewery. This was a very enjoyable, go at your own pace, follow the signs tour.

First stop, Carlsberg brewery. Carlsberg began operations in 1845. They very rapidly became a leading European brewery. One reason was because of the shortage of quality brewing yeast and because of that Carlberg developed their own, Saccharomyces carlsbergensis, which is still used today. 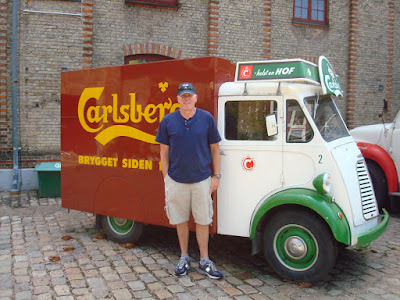 Carlsbergs' bottle collection; 20,214 unopened bottles. Jeff is holding an old wooden carrier for these three liter bottles that were used by folks to buy their beer at the brewery and carry it home. 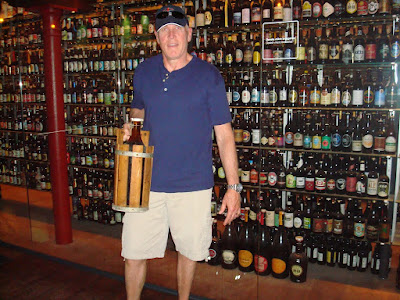 Carlsberg used an old Indian symbol for quality and well-being , the Swastika. Of course, with the advent of the Nazis they quickly dropped its use. This bottle is from around 1935. 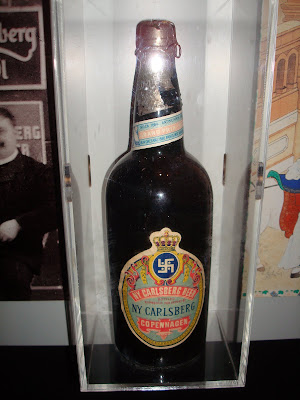 During WW II, grains used in the brewing process were hard to obtain because of shortages and the need for use in other food goods. This poster produced by Carlsberg shows how the nourishment from a single beer equals that of a number of differnt food products. Well, it was worth a try. 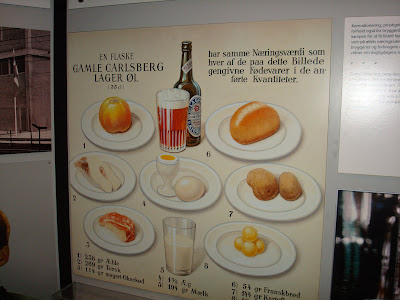 I'm sitting with one of the 19th century workers on break. That's a two-liter cask on the table in front of me. Brewery workers had been allocated a ration of four liters per day but eventually that was lowered to just two. Wonder why? 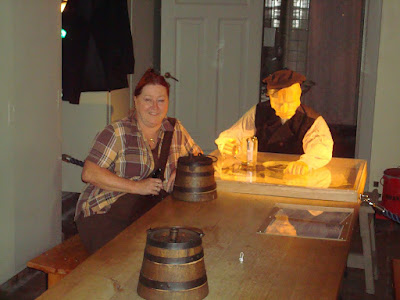 The famous Carlsberg elephants. Four of them hold up this structure which originally was a water tower and completed in 1901. That's our car between the elephants. 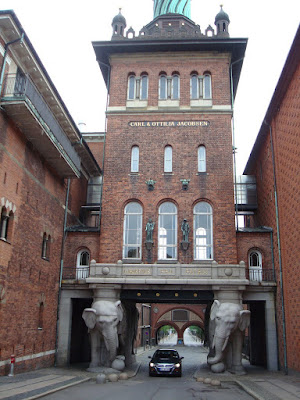 The swastika symbol on the side of one of the elephants. 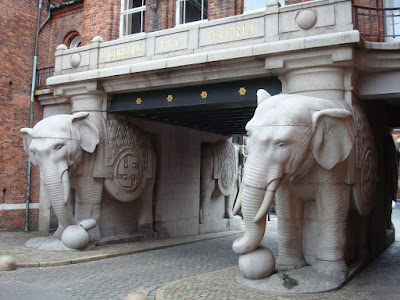 After the brewery we drove into the old town area of Copenhagen to check into our hotel. Along the way we were quite surprised to see that the city seemed rather dingy and run down with lots of trash and debris along the curbside. Even at our hotel there was rubbish piled on the curb and a rather large sink hole squarely in the middle of the sidewalk. After we checked into the hotel we learned the cause of all this disarray. The day prior to our arrival, Copenhagen had the largest single day rain fall in the history of the city; two months of rain in two hours. The city storm drains couldn’t handle that volume of water and the old town area was flooded. Our hotel had a foot of water in the lobby the day prior to our arrival. Within the Copenhagen old town there are a lot of businesses, bars, restaurants and shops that are five to six steps down below the street level. Those establishments had quite a bit of damage and, as mentioned, many of the cobblestone sidewalks had small to rather large sink holes. Throughout the old town none of the hotels, including ours, had hot water. So that’s what we found upon our arrival but we were still able to enjoy the city and what it had to offer.


The new Copenhagen harbor. Dug by Swedish prisoners of war in 1760. We started a harbor tour from here. 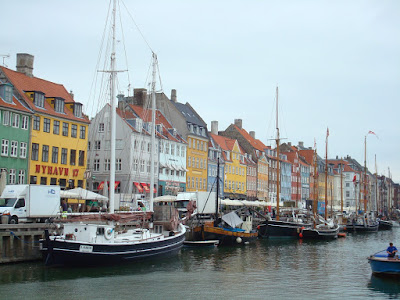 Copenhagen's Little Mermaid, based on the Hans Christian Anderson fairy tale. We're on a harbor tour boat so we're going to be in the background of all those people's picture. This place was packed with tourists. Over the years the Little Mermaid has been vandalized with paint and even decapitated. 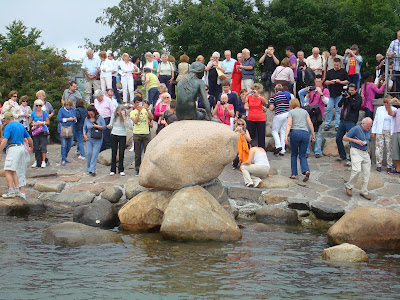 The dome of the Marble Church shows here between the Royal palace, Amalienborg Palace. On the left is the Queen's residence. On the right the Crowned Prince's. His flag is flying above his palace so he's at home. 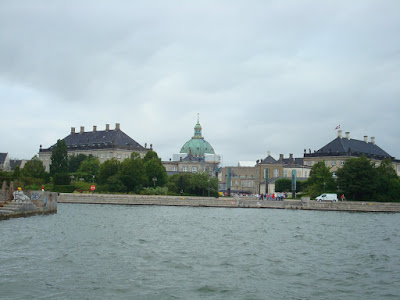 The Church of Our Savior with it's spiraling steeple. The spiral is a stairway which allows you to walk to the top. You can see the stairway is actually on the outside of the steeple so it's a wet walk up on a rainy day. 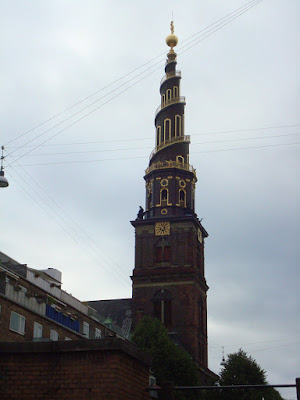 I don't remember which steeple this one is, they seemed to be everywhere in Copenhagen. But, I liked the matching colors of the steeple and the statue. 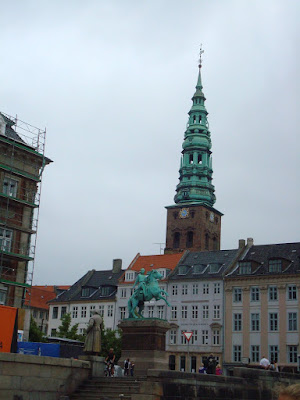 The steeple above the Copenhagen stock exchange. The steeple consists of the intertwined tails of four dragons. 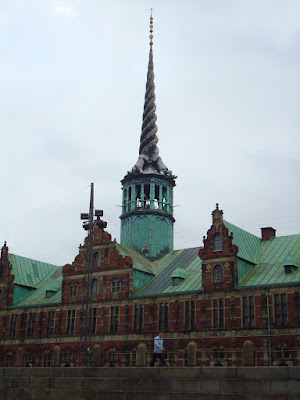 The Copenhagen harbor tour boat making a very tight turn in canal. Look at how low the bridge is that this long boat had to go under.

On the way up to top of the Round Tower I needed a WC. I had the choice of this new modern facility, down six steps, or . . . 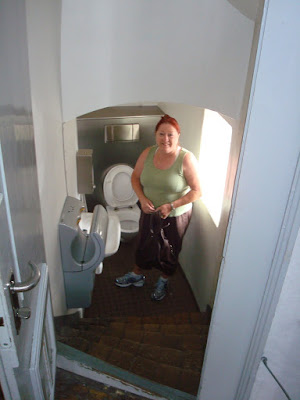 . . . this medieval privy right next door. There was no bucket for flushing so I went modern. 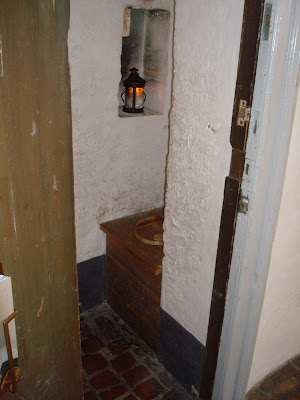 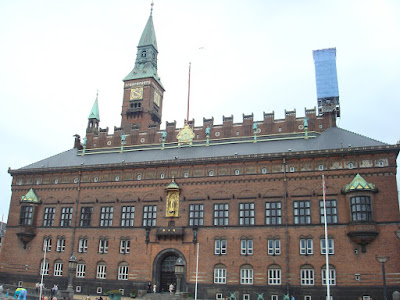 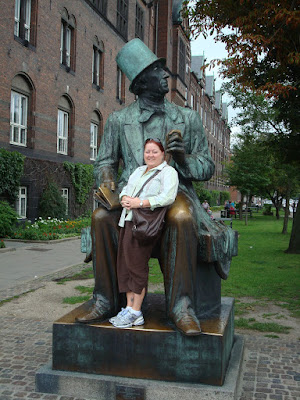 Collapsed sidewalk from the flood. This is actually a rather small sink hole. 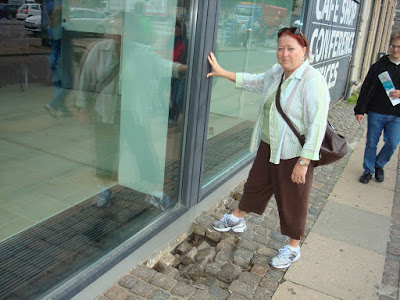 One of the shops in Copenhagen. Not sure why Jeff wanted to take this picture. 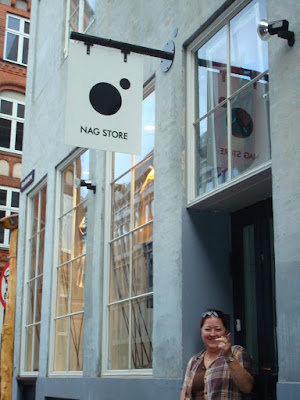 Just some of the sights from Copenhagen. We enjoyed our time there but with no hot water at the hotel, we were ready to move on to O$lo and a shower there.