Our Scandinavia trip complete we had a long drive home from Stockholm. To break it up we decided to stop in Rostock, Germany and visit the business establishment of a couple of retired Luftwaffe fighter pilots that are acquaintances of Jeff’s. To get to Rostock we made the seven hour drive from Stockholm, Sweden to Gedser, Denmark. From Gedser we took the hour and forty-five minute ferry to Rostock.

After a six hour drive from Stockholm we're approaching the Øresundsbron bridge that connects Malmö, Sweden to Denmark, just south of Copenhage. From this point we're about an hour from the ferry at Gedser, Denmark that will take us on the crossing to Rostock, Germany. 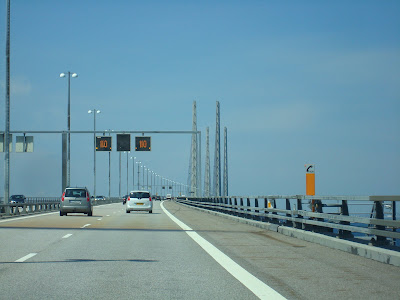 On the ferry. That's our car front right. First ones on, first ones off. 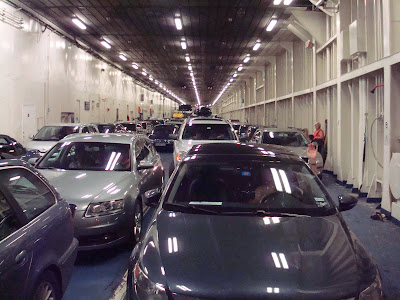 Arriving in the Rostock harbor. 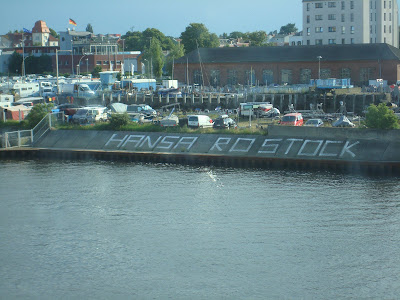 Until 1990 Rostock was in East Germany and the predominant shipping port for the German Democratic Republic. Following the collapse of the Eastern Bloc the Luftwaffe inherited the air base at Laage, east of Rostock, and the MiG-29’s stationed there. That’s where Jeff’s friends, Hurrell and Hooters, come in. As Luftwaffe fighter pilots they were assigned to Laage and the MiG-29 where they stayed until their retirements. That’s when they decided to go into business together; and what better business for two fighter pilots than a bar?. Hurrel and Hooters are the proprietors of Schallmauer (Sound Barrier).

Unfortunately, Hurrel and Hooters where out of town but their staff of bartenders took care of us quite well. If you consider free drinks for the night “quite well.” 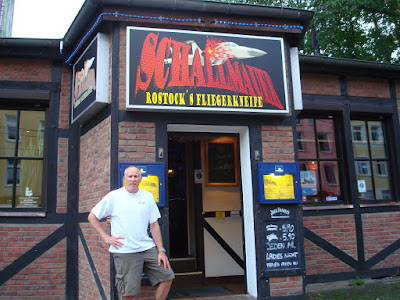 Drinking Rostocker pils in Rostock. On the house at the Schallmauer for friends of the owners. 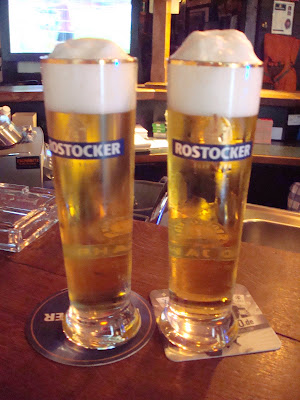 Schallmauer was a great fighter pilot bar. Fighter plane, jet and pilot memorabilia hanging all over the place. We had fun night.

Next day, finally home and the end of a wonderful trip. Here's a picture of the 42 beers we collected along the way from northern Germany, Denmark, Norway and Sweden. With these the vacation won't be over for a while. 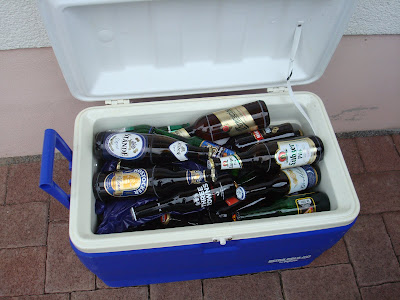 Well, that's it. Our Scandinavia extravaganza complete. Time to rest up and get ready for the next big adventure. August, September and October already planned. Can't wait!!
Posted by Sandy and Jeff at Friday, July 22, 2011