Only Tourists Go There

Here’s a comment we hear every once in a while, “Only tourist go to the Hofbräuhaus.” Another one is, “Oktoberfest is just full of a bunch of tourists. The local Germans, the Bavarians, never go there.” Well, we’ve spent plenty of time at both the Hofbräuhaus and the Oktoberfest and neither of these could be further from the truth.

At the Hofbräuhaus, sure, most of the folks there are tourist but there are around 12 tables that are reserved for locals; the regulars. Anyone can sit at these tables but when the Germans that regularly sit there show up, you make room for them. If there isn’t any room, you get up and find another place to sit or leave. Hofbräuhaus also has large, locking iron shelves where regulars can lock up their personal beer stein, awaiting their return. If Hofbräuhaus was only for tourist they wouldn’t have either of these, reserved tables and locked shelves, for the local Germans.

Unless we're sitting with a big group of American friends in the Hofbräuhaus , invariably, we meet some great German people to talk to and spend time with. Last Saturday we met a very nice Stuttgart couple, typical of the wonderful German people you meet in Munich. That's what makes the Hofbräuhaus so much fun; a great mixture of locals and people from all over the world.

Stammtisch (regular's table). We counted twelve tables that have some sort of Stammtisch sign hanging above them. Every one is different and this may be the most ornate. Sitting here is fine but once one of the local folks listed on this sign shows up you make room or leave. 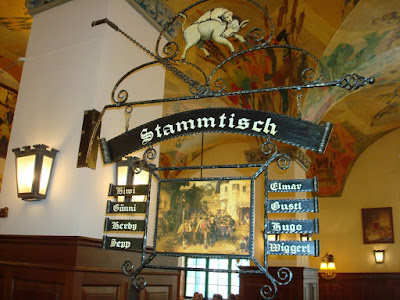 Lock-up shelves for regular customer bier steins. These things are made of solid iron bars and there's hundreds of them located in a couple different places within the Hofbräuhaus. 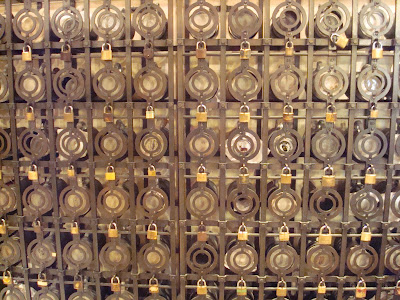 You think this guy looks like a tourist? This is our third visit to the Hofbräuhaus in the last year and he's been there every night sitting at his Stammtisch. He doesn't seem as happy as Jeff. 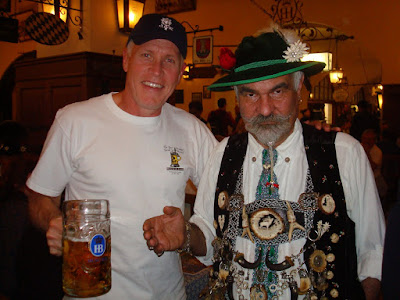 We were taking pictures of the locked beer steins when this gentleman walked in to get his mug. We were so happy to see this that we sound like a couple of moronic groupies after he got his beer stein out and locked his shelf back up. Once he'd done that he walked over to this pristine, copper sink to rinse out his stein. You think they'd have all this set up for tourists?

Now Oktoberfest, of course, is full of tens of thousands of tourists, but walk along among the beer tents and you’ll see the local Bavarians, thousands and thousands of them, young and old, dressed to the nines in lederhosen and dirndl (leather pants and traditional Bavarian women's dress). We’ve sat, talked and drank with all sorts of Bavarian/German folks; hop farmers, policemen, military people, shop owners, on and on. The locals are there at Oktoberfest and to say that they're not is completely wrong.

Here's the hops farmers we met a few years ago at Oktoberfest. These are the Bavarian farmers that grow the hops that's used to make these great Oktoberfest beers. 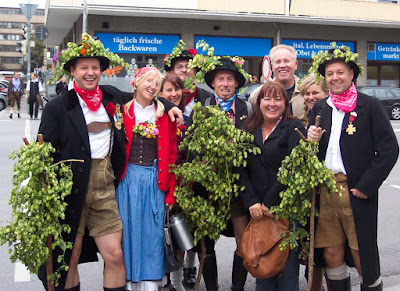 The Germans-don't-go-to-the-Oktoberfest comment(that's like saying nobody goes to the Oktoberfest because it's always so crowded) quite often comes from Americans that have lived here for quite some time and some who have even retired here. Typically, if we ask them if they've ever been their answer is no. I kind of wonder if they say this about Oktoberfest because they feel foolish having never gone.

Beyond that, two other facts. A look at the names on reserved tables, in everyone of the big beer tents, at Oktoberfest will show, by far the great majority, the names of German companies and corporations. Only a small number are reserved in the names of individuals. Finally, in a recent Oktoberfest publication, they state that 70% of all people that attend Munich's Oktoberfest are residents of Germany.

Well, I think I beat those two myths to death. And, as I often say to Jeff (according to him), I don't want your opinion, I want you to agree with me.
Posted by Sandy and Jeff at Thursday, August 04, 2011