Our second year in a row to enjoy the Kirchheimbolanden Residenzfest.  Kibo, as it’s called by the locals, is one of the best small city festivals in our area.  It happens each year on the second weekend of August.  Good, chilled white wines, plates of tender wild boar with red cabbage and knodels and wonderful, friendly people.  We won’t bore you with all the festing pictures since we wrote about this all last year.  But, we love Kibo and have so many wonderful memories of the time we lived here, so here’s a few pictures of this years fest.

One of our favorite towns in all of Germany; Kirchheimbolanden. 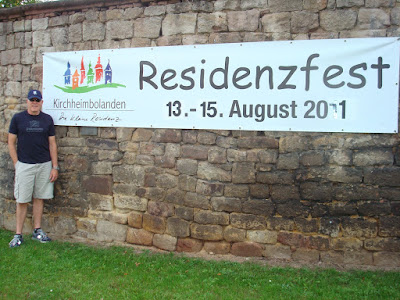 One the town’s unique manhole covers. It shows the town crest, a wild boar on a green background below a black and white checkered field and also the founding year of the town, 1368. 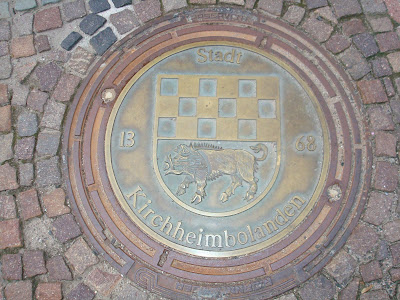 I’m standing here next to the town’s promotional sign for the Residenzfest. That man’s black silouhette is that of Mozart. One of the Kirchheimbolanden’s claims to fame is that Mozart played in the town Schloss (palace) in the late 1700’s. 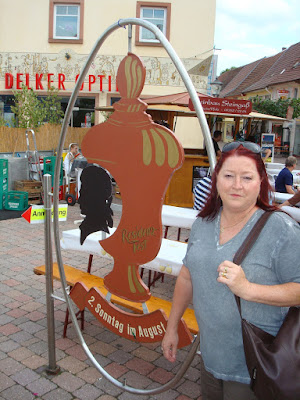 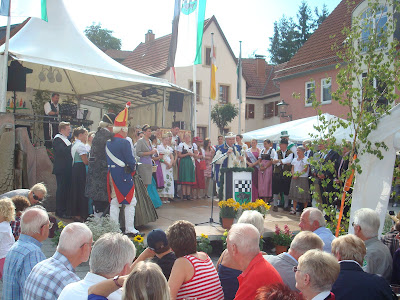 One of the highlights of the Residenzfest is the 10K run that starts at 1700 (5PM) right after the festivals official opening. They also have a Bambini Lauf (little kids run). After the opening ceremony, if you don’t want to run, the town provides an hour of free wine; one of Kibo’s finer  whites and a nice rosé.  We didn't run. 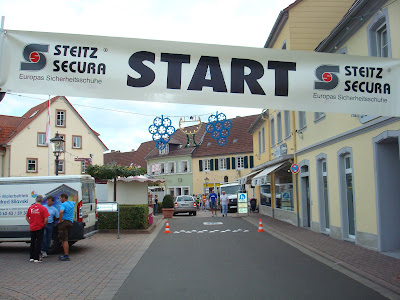 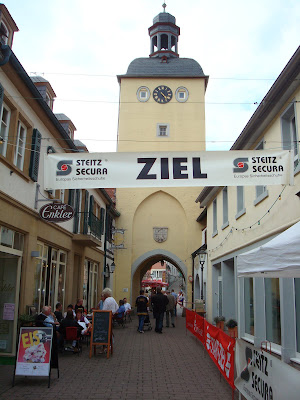 Jeff’s obligatory picture next to the town’s wild boar. He never gets tired of it. Neither do I really. 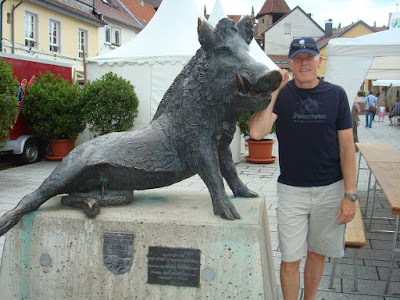 Year's ago, when we lived in Kibo, Jeff and I walked into this bar and told no Americans allowed.  No such problem today. 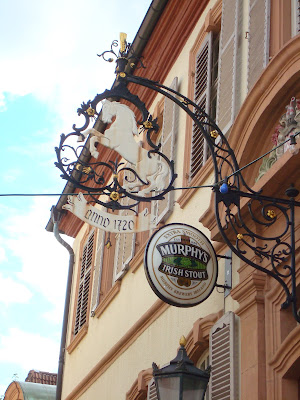 Kurt Klein and Jeff.  Kurt was our landlord when we lived in Kirchheimbolanden from 1987-91.  We had lost touch, so one of our first things, when we moved back to Germany, was to visit Kurt’s home.  But, because of the numerous new houses in his neighborhood, after twenty years, we weren’t sure which place was his.  Then, just last weekend, totally out of the blue, Jeff got a Facebook friend request from Kurt.  What a coincidence that we were already planning on being at the Residenzfest.  What better place to meet than at the big brass wild boar and pick-up an old friendship? 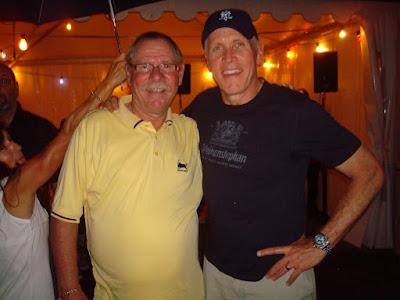 On the way to the car we stopped here to get an order of pommes frites. Just one more fun thing to go along with a wonderful German street festival.