After we were done at Auschwitz I we got on the shuttle bus that took us a couple kilometers to the gigantic Auschwitz II-Birkenau concentration/execution camp. The size of the place was overwhelming. Having been to the Dachau memorial outside of Munich a number of times we estimate that Auschwitz II could be ten times that size. Auschwitz II covers 422 acres, it had 12 kilometers of fence, over 300 barrack and 98 original factories where many of the prisoners toiled their lives away.

An aerial photo of Auschwitz II-Birkenau. The black lines at the lower left are the train tracks that entered the camp through the main guard tower. Once in the camp, that long swath of open area between the buildings is where the unloading ramp area was.  Above the left and right end of the yellow box is where the crematoriums were.  Also, above the yellow box, just right of center is an area of 30 buildings known as Canada. Those were storage warehouses for the items taken from the people upon their arrival. Just right of Canada is a single building which is Crematorium IV. 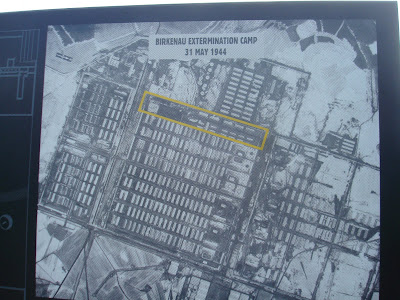 The sight walking through the main guard tower.  The unloading ramp ahead. The women's camp to the left, men's to the right. 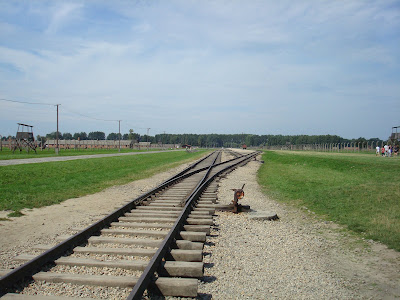 This is a video that scans the Auschwitz II-Birkenau camp from just inside the main guard tower. It was a bit windy so you may need to turn up your volume to hear the commentary.

These wooden barracks were designed as horse barns and were meant to hold 52 horses but here, at Auschwitz II, they held 400 men. 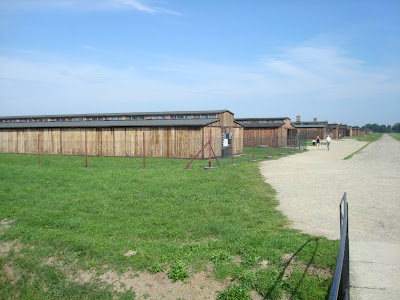 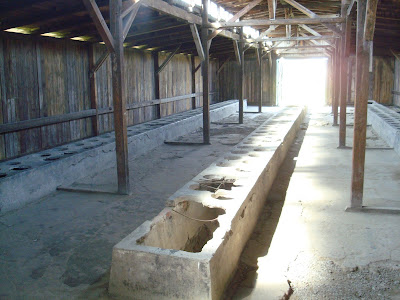 Prisoner bunks.  They were usually occupied by three men per level.  Each barracks had two chimneys, one at each end.  Here you can see the cement duct that ran down the center of the barracks connecting the chimneys.  Small vent holes on either side of the duct where to disperse the heat but because the barracks weren't insolated and very little heating fuel was available these barracks were quite cold in the winter months. 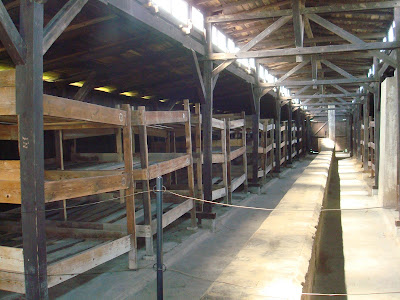 Chimneys, two per barracks, is all that remains of most of the camp barracks. There were as many as 300 barracks. 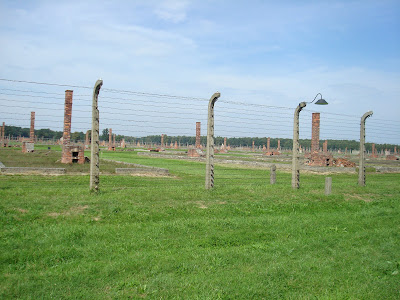 Barracks and a perimeter fence with guard towers. 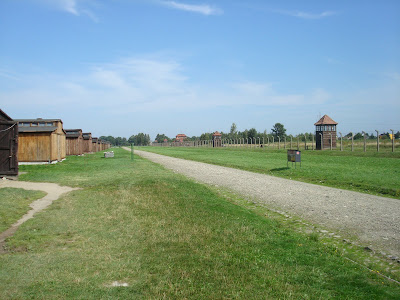 Jeff on the unloading ramp and main guard tower in the background. Hundreds of thousands of people, mostly Jews, from across Europe first set foot in Auschwitz on this ramp, most of them destined to die, many within the hour, in the camp's crematoriums. 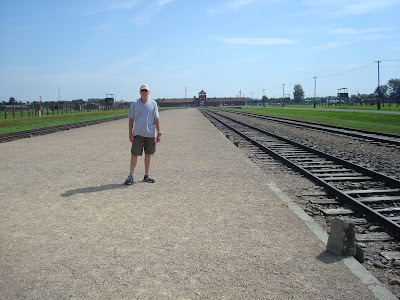 A video on the off-loading ramp at Auschwitz II.  The railway car you see here would hold over 70 people.  This ramp is where SS men would make a selection of off-loading prisoners.  Most women, children and elderly were told to go to the left which took them to the crematoriums. Others went right into the main labor camp.  It was still windy so you may need to turn up your volume to hear the comments.

Those told to go to the right from the ramp went through this gate and into the work camp. 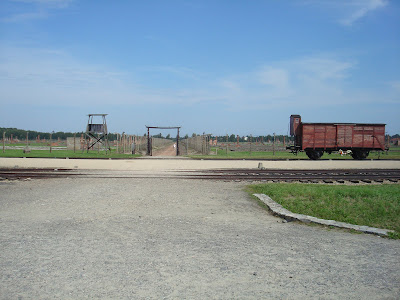 Those selected to go to the left went through this gate, into the women's camp area, and then on to the crematoriums. Bunks in the women's barracks. Normally, five women per level. 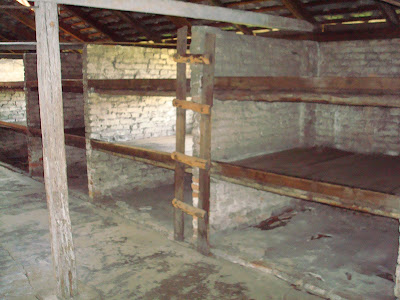 Before the SS fled Auschwitz they attempted to destroy as much evidence as they could about their crimes here.  In addition to burning much of the paper evidence they also dynamited the crematoriums.  This is Crematorium II; still in the condition it was found in when Russian troops liberated the camp. 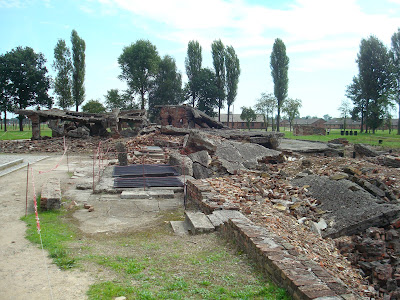 This video explains the layout of the crematoriums. The extermination work, except for gassing which only SS guards could perform, was forced onto a group of mostly Jewish men known as the Sonderkommando (Special Unit). Their job was to dispose of the bodies, extract gold from the teeth of the dead and clean up following each execution episode.  Sonderkommandos lived and ate better than the rest of the prison population so that they could do their work but every four months the entire Sonderkommando work force was exterminated and new arrivals took their place. Just one more attempt by the SS to ensure the knowledge of what was happening at Auschwitz would not get out to the world.

The tracks between Crematorium II and III looking back to the unloading ramp and the main guard tower. 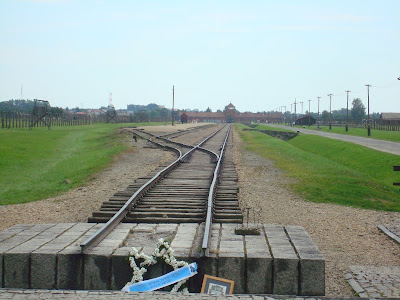 Picture of an Auschwitz II crematorium. 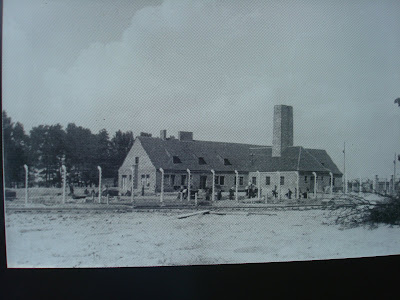 On the north side of the camp was the main bath house, still completely intact, used to wash and delouse new arrivals who were choosen to go to the labor camp. All their belongings were taken from them including the clothes their wore. Often they would have to stand in bitter cold until they were taken for an ice cold shower and sprayed with abrasive delousing chemicals. After that they would receive their striped prisoner uniforms and taken to their barracks. 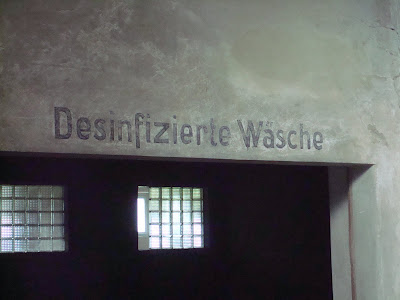 Within the main bath house were these delousing facilities to clean clothes taken from the new arrivals.  Most of these clothes would be sent back to Germany to be given to the people there. 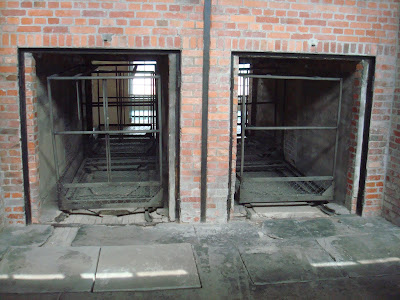 Also in the main bath house were these units used to steam clean the personal items taken from the new prisoners. 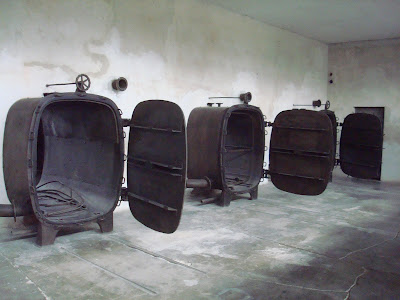 On October 7, 1944 the Sonderkommando revolted here at Crematorium IV. They had been planning a resistance by smuggling in small amounts of gunpowder from munitions factories within the camp. On that day, when they were told to assemble after their work shift they knew their time had come for their own extermination. With axes, hammers and home-made grenades they attacked the SS. They threw one SS guard into the ovens alive and partially destroyed the crematorium with the gunpowder they had gathered. Eventually they were over powered by the SS and executed.  On that day 450 Sonderkommando were killed. 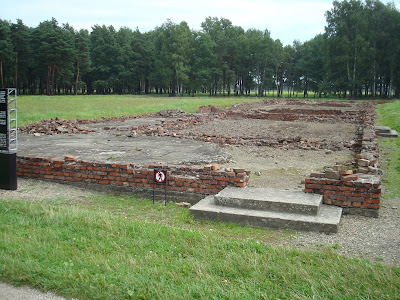 A video taken from the northeast corner of Auschwitz II-Birkenau near the location of Crematorium IV and V.  You'll hear the area named Canada mentioned. Canada, named because that country was viewed as a land of plenty, was where women work details went through and separated the belongings taken from the new arrivals.  They searched the pockets and seams of clothes to find jewels, gold and money. All the various personal items where separated and put into the 30 warehouses in the Canada area until they would be taken back to Germany for use there.

A large pond near Crematorium IV and V where human ashes from the crematoriums were dumped. 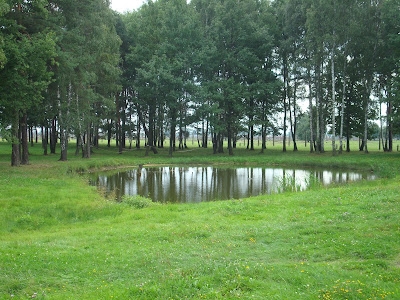 One of the hand cars used to transport human ashes from the crematoriums. 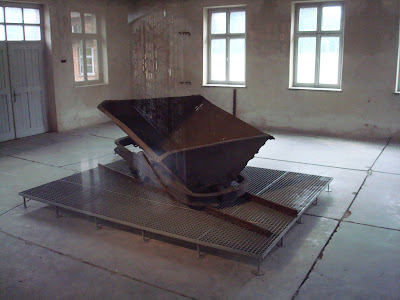 Beyond the fence is the foundation of Block 15 in Aushwitz II-Birkenau. This is the location of Dr. Joseph Mengeles experimentation facility. 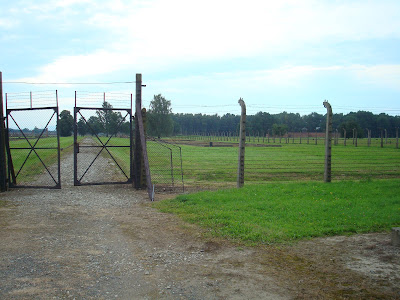 Looking from the far northeast corner of the camp back towards the main guard tower.  Row upon row of barrack ruins. 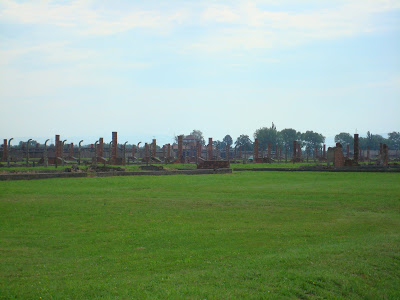 A picture of the unloading process.  In the background Crematorium II chimney to the left and Crematorium III to the right.  Prisoners selectioned to go to the left, extermination,  passed the little house across the tracks and passed through that gate on the way to the crematoriums.  Selections to the right, brutal work and subjects for experimentation, entered the camp passing the guard tower on the right. 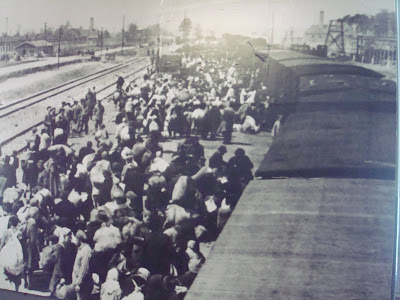 Suitcases taken from the new arrivals found in the warehouses of the Canada area. Most people had written their name and address on the outside of their bags hoping that some day they would return home. 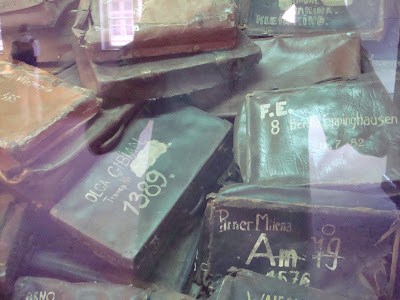 Children's shoes. These types of items were found in the Canada buildings.  Warehouses of shoes, brushes, pots and pans, eyeglasses, clothes and human hair.  Although the piles of these items are staggering to see, this is just what was left in the camp at the end of the war. Hundreds of trains had already taken most of these items back to Germany for use there. 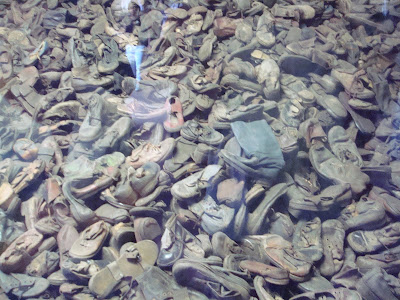 A memorial stone located near the Auschwitz II-Birkenau crematoriums.  Auschwitz was liberated by Russian forces on January 27, 1945. They found 7000 prisoners. About a week prior SS guards forced 60,000 Auschwitz inmates onto a death march towards Germany.  15,000 of those did not survive. 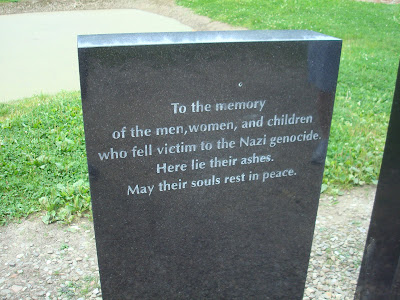 I heard a leading expert on the Holocaust say that no lessons can be learned from these horrific events because to accept something positive from it, like a lesson, is the beginning of accepting the entire incident. However, now, after having been there, with the immensity of Auschwitz making it still difficult to grasp that this actually happened, knowing this wasn't just mass murder but a total industry, a factory built to commit human extermination, at least to me, Auschwitz reminds us that there is evil in the world and evil can't be talked to, it can't be negotiated with, it can't be convinced to change its ways. Evil can only be vanquished when confronted by a force greater than itself and sometimes that requires taking up arms to ensure its defeat. That's what Auschwitz is, a warning. It's a warning that evil still exits and, if it's to be defeated, it will take the good in men and women to do it.
Posted by Sandy and Jeff at Monday, August 29, 2011