Saturday, Kirchheimbolanden Residenzfest, Sunday, Kaiserslautern vs. Augsburg football match. Our friend Kurt (and old landlord) had extra tickets for the match on Sunday and invited us to go along. Jeff and I were really excited because we had not been to a professional soccer match in Germany.

There's been a Kaiserslautern football club since 1900. In 1963 1.FCK, Kaiserslautern Roten Teufel (Red Devils), became one of the original sixteen teams of the newly formed Deutsches Bundesliga (German National League).  Today there are 18 teams in the Bundesliga. Teams play each of the other 17 teams twice a season, once at home, once away, with a winter break, which constitutes the 34 game season. Normally they play one game a week on Friday, Saturday or Sunday. Last season, 1.FCK finished seventh overall. The most famous team in the Bundesliga is Bayern München (the New York Yankees of German football), however, 1.FCK beat them during their match at home last year. Kaiserslautern’s opponent this day was Augsburg who had been promoted from the previous year when they had played in the lower league, 2.Budesliga. With all that, Jeff and I were so excited to be going to the Red Devil’s home opener.

Here we’re entering the Fritz Walter Stadium. Fritz Walter was one of Kaiserslautern’s all-time famous players.  He played in the early 1950’s. 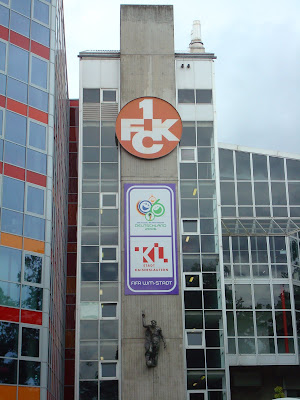 Here’s Bill, Kurt, Jeff and I. Jeff has on his just-bought 1.FCK shirt and I have on my new Red Devil scarf. Bill is another good friend of Kurt’s, very nice and an interesting guy. He spent a few years in Germany while on active duty with the US Army, married a German lady, got out and decided to stay and now lives and works here. He has no ties whatsoever with the US military now, a true American expatriate. 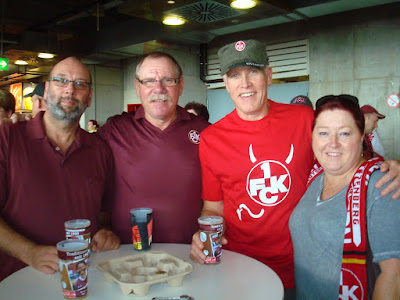 The opposite side of the stadium from our seats. Although the playing field is not covered, all spectator seats are protected from the rain which was nice on this days because of a persistent light rain during the first half. 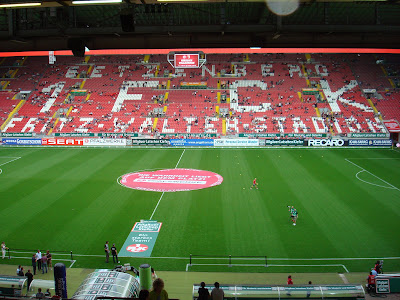 This video is quite interesting because it shows where the visiting fans sit; a corner of the stadium, looking into the sun, as far away from the west end K-Town fans as possible. The video pans from the Augsburg visitor section to the west and the huge Red Devil rowdy fan section. To avoid confrontations, after the match is complete, these visiting fans must stay in their area until all the home team fans have departed the stadium.


At the west end of the stadium is the Red Devil’s huge, no-seat-standing-only cheering section. They are loud, they have awesome orchestrated cheers and those huge flags are just so cool. This is all pregame stuff, the stadium is still not full.


SCORE!!!!! The final score was 1-1. Yes, like kissing your sister. Augsburg scored early in the first half when 1.FCK played rather sloppy. But, in the second half K-Town was much sharper and had a number of scoring opportunities before finally getting this goal with just 10 minutes left. 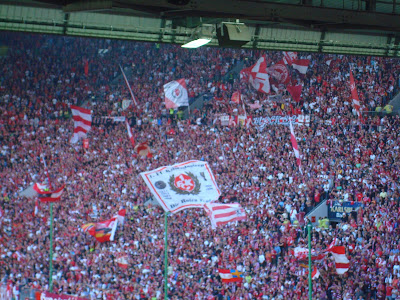 So our first Bundesliga match was great fun. The result wasn't what we wanted but at least they didn't lose.  I guess that's the mindset for most soccer fans around the world.
WOO HOO!!  We tied!!! We are the champions. No time for losing 'cause we are the champions!!!  I hope!!! 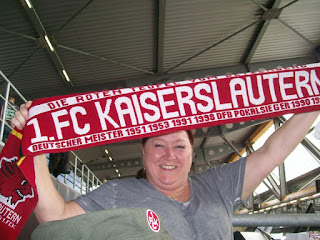