Jeff and I were driving to Poland last week but since it’s a nine hour trip we looked for somewhere about half way where we could stop for the night. Conveniently, that turned out to be Dresden, a city we’d not been to before. Actually, we planned to spend more time than just an overnight sleep. We scheduled a city tour of Dresden the following morning before we pressed on to Poland and also reserved a hotel in the city for our trip home.

Dresden was founded in 1206. It’s the capitol of the German state of Saxony. Dresden had become known as the Jewel Box of Europe because of its artistic and cultural grandeur with numerous buildings designed in baroque and rococo architectural styles. During the early 1700’s Augustus the Strong, the Elector of Saxony and King of Poland had the greatest impact on the city’s development as a cultural center by attracting musicians and artists from across Europe. In the early 20th century Dresden had become renowned for its camera technology and cigarette factories. On the night of 13/14 February 1945, Allied bombers destroyed 95% of the city center which resulted in a raging fire storm that killed anywhere from 25,000 (2010 Dresden Historian’s Commission) to several hundred thousand. Dresden was in the Soviet sector of post war Germany and thus a part of the German Democratic Republic, East Germany. Following the fall of the Soviet controlled east in 1990, the city has renovated and rebuilt many of their war damaged buildings and regained much of its former splendor. 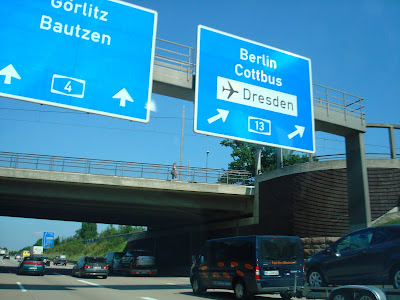 Souped up Trabant, complete with the old DDR (Deutsche Demokratische Republik) sticker. This is the cheap, little piece of crap the East Germans made during the Cold War. Still a piece of crap no matter how you look at it. 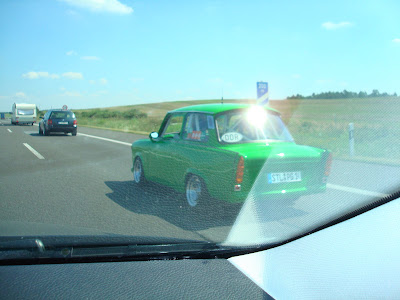 We're back!! Another Segway tour in Dresden. Just warming up.


In Dresden’s Big Park. Behind us is Augustus the Strongs party house, one of his many palaces; built for special party events. It was heavily damaged during the war. Now renovated it’s used for art shows and other cultural events. 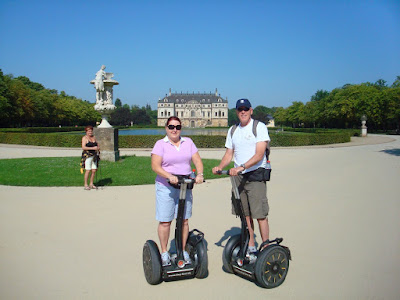 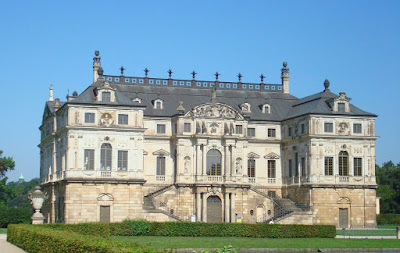 An old river boat on the Elbe River. That smoke stack had an interesting capability to be significantly leaned back so that it could fit under the city bridges. 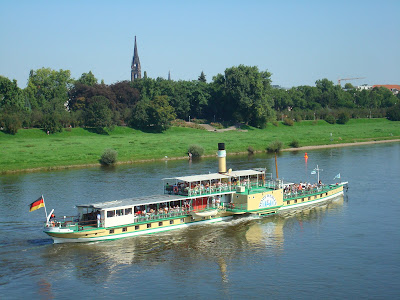 THC anyone? That’s the kick in marijuana. Not surprisingly we’re now in the café/bar, bohemian section of Dresden. 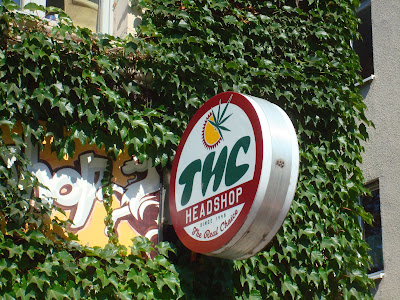 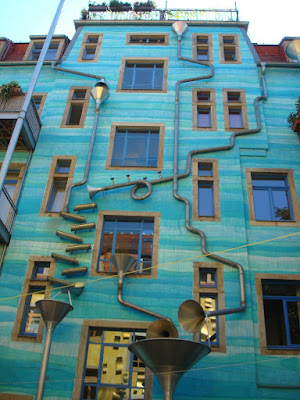 Since the fall of the communist regime almost every building in Dresden has been renovated, rebuilt, painted, washed or torn down. This dreary building is what much of Dresden looked like after the war and throughout the East German period. Apparently a dispute between the property owner and the city has kept this building in its dilapidated state but it's interesting to see what much of the city looked like during that time. 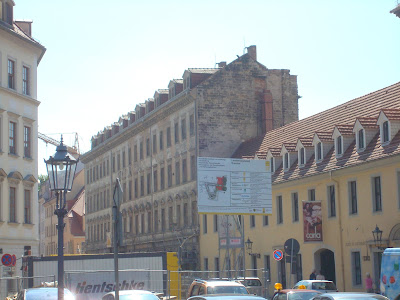 Jeff and I at a statue of Augustus the Strong. Those really cool nerd utility belt was loaned to us by the Segway company so we could carry a bottle of water. Didn’t want you to think that we are actually that geeky. 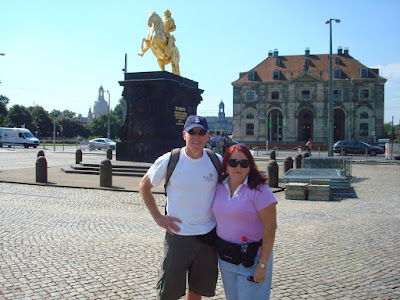 River Elba with Dresden in background. 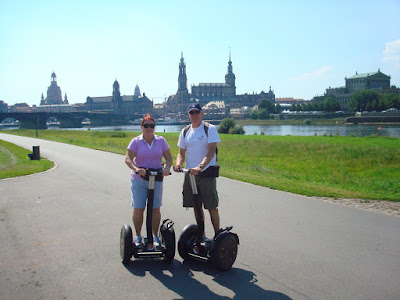 Augustus Bridge, with the Frauenkirche (Church of Our Lady), Ständehaus (House of Estates, the former Parliment buidling), and the Hausmannsturm Residenzschloss (Royal Palace). 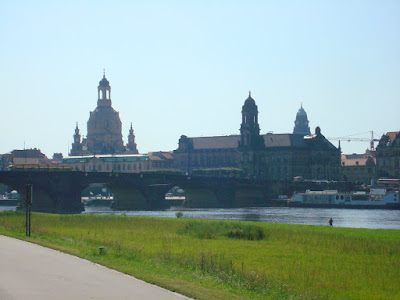 This mosque is not a mosque and never was. It’s actually an old cigarette factory from the early 20th century. In 1991 it was a dirty, dingy building but now it’s an office building and popular restaurant. 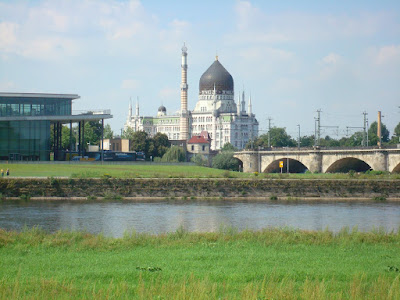 The famous 18th century landscape artist Canaletto did a number of pieces in Dresden. The city has placed these metal frames in a number of places to highlight today’s image of one of Canaletto’s works. 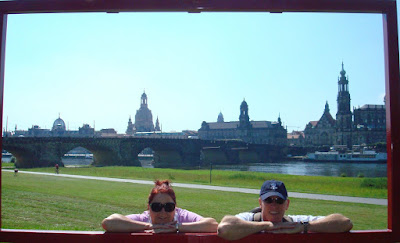 Here's Canaletto's landscape. Pretty close. Notice the one steeple has scaffolding on it. I guess even back then scaffolding was big business in Eureope.div class="separator" style="clear: both; text-align: center;"> 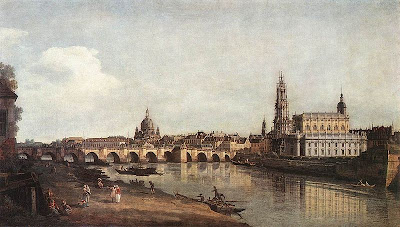 Same picture without us messing it up.  Augustus Bridge, from the left the Kunstakademie (Fine Arts Academy), Frauenkirche (Church of Our Lady), Ständehaus (House of Estates, the former Parliment buidling), the Katholische Hofkirche (The Catholic Church of the Court of Saxony) and the Hausmannsturm Residenzschloss (Royal Palace). 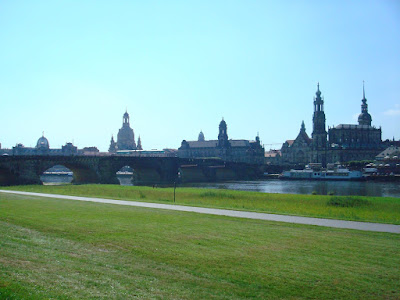 On the shore of the Elbe River Dresden has an event they call Night Film. It’s kind of an interesting set up here in from the treasury building. Obviously, the big outdoor screen is to the right of this picture. The newest Harry Potter movie is playing. 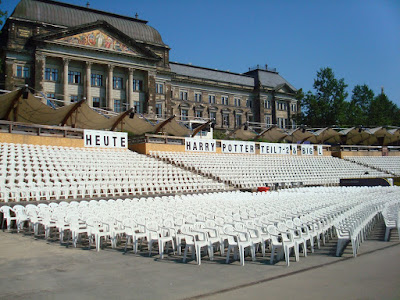 The three tallest spires from the left are the Ständehaus (House of Estates, the former Parliment buidling), the Hausmannsturm Residenzschloss (Royal Palace) and the Katholische Hofkirche (The Catholic Church of the Court of Saxony). 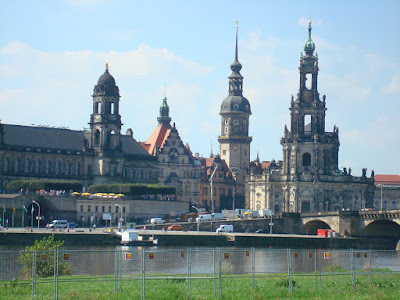 Another spire on the back of the Hausmann Residenzschloss. 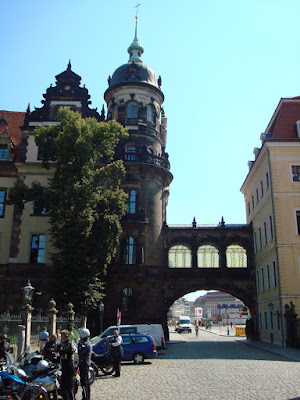 The front of Dresden’s Semperoper (Opera House). Many of the works of Richard Strauss premiered here. The Semperoper was completed destroyed on the night of 13 February 1945. On 13 February 1985, 40 years to the day, having been rebuilt to almost exact specifications, the Semperoper reopened with the same opera that had been the last performance before the buildings destruction. 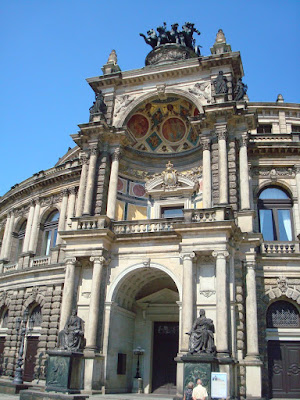 The Fürstenzug (Procession of Princes) is a 335’ by 31’ mural made from 25,000 Meißner porcelain tiles. It depicts the line of 35 Saxon kings and was constructed from 1904-1907. Meißner porcelain is one of the finest in the entire world. Since porcelain is produced using temperatures of 25,000° F, the Fürstenzug was able to withstand the 13 February 1945 fire storm temperatures of 10,000° F and so it incurred only minor damage as a result of the Allied bombing raid that night. 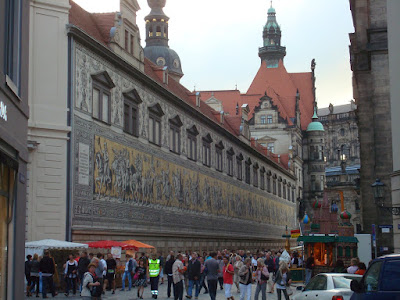 Closer image of the Fürstenzug. 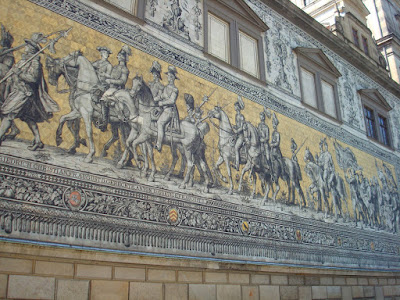 Augustus the Strong on the Fürstenzug. 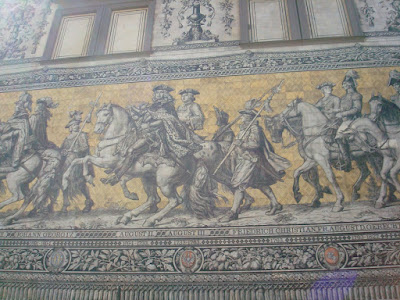 Maybe the most famous structure in the Dresden city center, the Frauenkirche (The Church of Our Lady). It was almost completely destroyed during the February 1945 raid and remained in a state of total ruin until 1991 when a hugely ambitious rebuilding effort began.. It was reconsecrated in 2005. The dark area to the left is an orginal standing part of the church. The Frauenkirche is a Lutheran church and the statue in front is of Martin Luther. 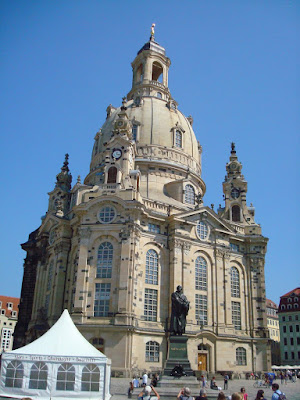 The appearance of the Frauenkirche until 1991.  Martin Luther didn't take a hit. 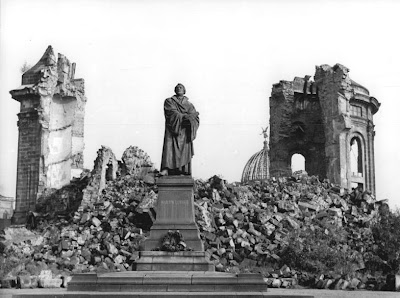 Our second night in Dresden was after our return from Poland. Completely coincidentally, the city was throwing its annual Dresdner Stadtfest (Dresden City Fest), the largest city festival in eastern Germany. And it was a big festival all throughout the old town city center. After our four hour drive back from Poland we needed something to quench our thirst and a local popular pilsner certainly would work. Radeberger; a Dresden favorite. 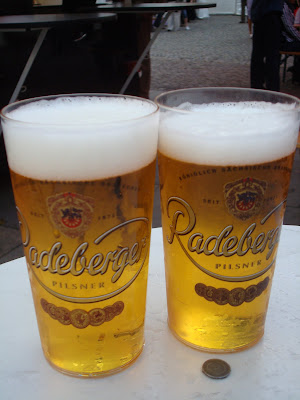 The Frauenkirche at night. 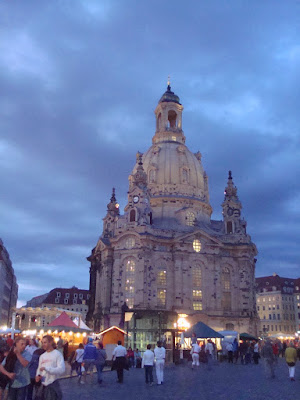 Now that’s a grill!! How many kinds of pork can you get on that thing? 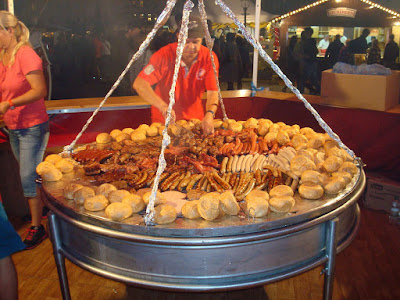 On the drive home; every gas station should have one of these. Look beyond our car; a beer garden. 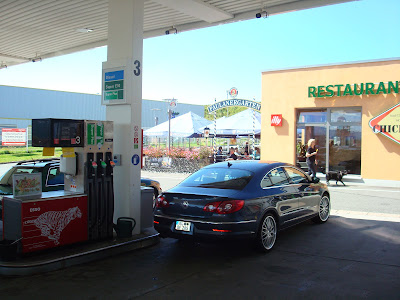 Dresden was a wonderful visit. It's a beautiful city and has done wonders to recover from WW II and 45 years of communist domination. Our next entries will be about the reason we were even in this part of Germany, on our way to Poland; a visit to the Auschwitz Memorial
Posted by Sandy and Jeff at Tuesday, August 23, 2011