Got a little worried last weekend because we had no plans whatsoever. No festival, nothing. Luckily, our little town of Weilerbach had their annual fall festival to save the day. Weilerbach holds their festival from Saturday through Monday with a parade on Sunday. First time we've ever been able to walk from our home to a local festival.

The fest had all the regular stuff; couple of vintner booths, three beer vendors, rides for kids, marching band and all the great German food and treats.

Talked with some of the locals who are very nice for the most part. One German local, after we told him we had just returned from Oktoberfest, told us that no Bavarians go to the Oktoberfest, it's all foreigners. Jeff asked him who were all the people wearing the lederhosen? Who were all the pretty young girls in the colorful dirndls? Where did the hops farmers we sat and talked with come from? When Jeff told him that of the thirteen times we've been to the Oktoberfest in Munich we've noticed thousands of Bavarians in every tent we've ever been in, the guy just turned and walked away. Yea, we beat the Germans again.

Beyond that we had a great time. A little stroll to the fest on Saturday night and then back Sunday afternoon for the parade and more festing. It was a little chilly though. Drinking a cold beer on a cold night is chilly experience but still lots of fun.

The parade was great fun. Surprising how long for the size of our town. The highlight was a wagon/float that handed out free cups of beer. What a great country!! We didn't get a picture of it because Jeff and I were too busy chasing it to get our cup, which we did. 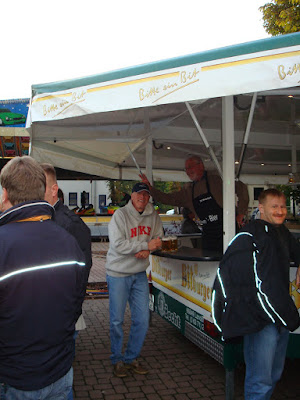 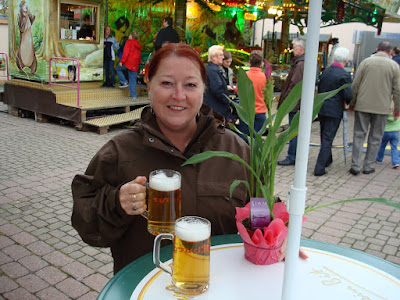 Here's me Sunday afternoon. Notice my new plant. One of the floats in the parade was run by the local florist and they handed out various kinds of free plants.

Here's a band from one of the local towns playing Saturday night. Note the liter of beer with the long straws on the small wall. Yes, Jeff got carried away in his artistic creativity. It makes me nauseous to watch the last part of this.

Here's what the band did after playing a few songs. Isn't that nice that they share. 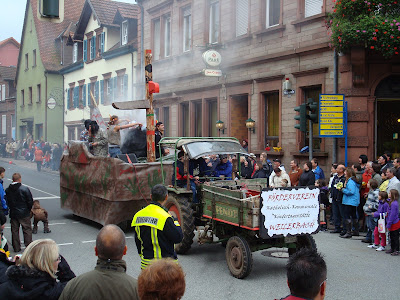 The guys on this float were dressed up as American Indians and doing smoke signals along the parade route. Sweet tractor! 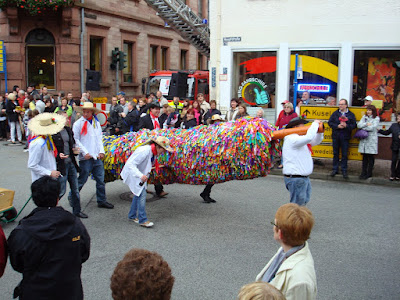 It's tradition for the young people of the town to carry this new wine pole until it's time to mount it on the town May Pole. Guess it's better than sex texting. 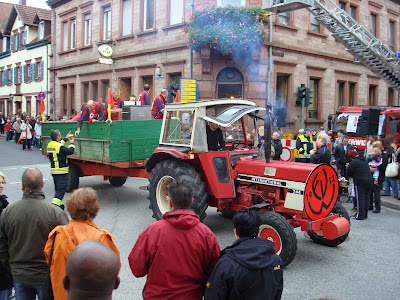 Oh, I guess Jeff did get a picture of the beer wagon before we stepped out to get ours. Here you can see one of the town fireman getting his portion of free beer. What a great country!!