Jeff's unit had a down day last Friday so we drove up to Rudesheim to enjoy the first day of their Federweißer festival and to roam around the area during the afternoon. Rudesheim am Rhein is a favorite town of ours that sits on the north side of the Rhine River about 15 miles west of Wiesbaden, just before the river makes its big turn north on its way to the North Sea. Rudesheim is only an hour drive from our house and the quickest route there includes a ferry ride across the Rhine River from Bingen to Rudesheim.

Ferries are always an enjoyable adventure here in Germany. It’s interesting to watch the efficient operation of the entire process and, of course, the ferry ride itself is just a fun ride.

We always laugh at this sign. Danger! Beware of driving in the river! 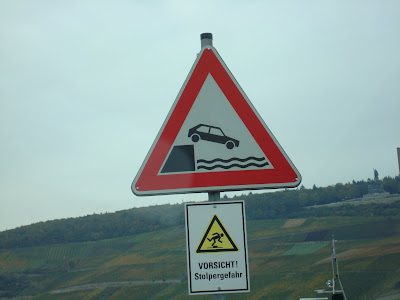 On the ferry about to cross the Rhine River. That tall object on top of the ridge is the Niederwalddenkmal. More on that later. 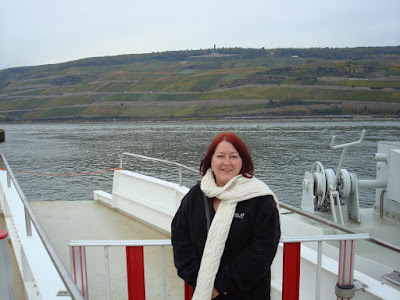 Here's the other ferry meeting us crossing the river. This ferry is about half the size of the one we're on. 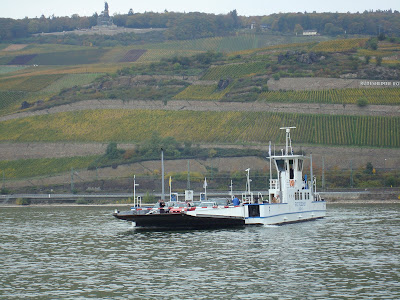 The vineyards on the north side of the Rhine, just west of Rudesheim. You can see the Denkmal statue there on the top of the hill. 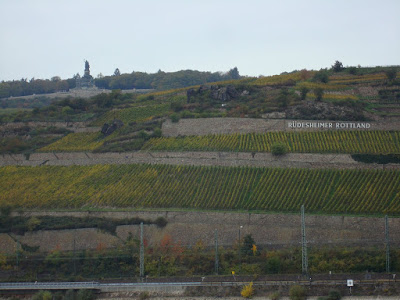 Once across, we parked the car and went straight to the cable car system that goes up over the vineyards above Rudesheim and to the Denkmal statue in the Niederwald. The ride up the cable car, which starts in Rudesheim, is a lot of fun and provides a wonderful view of the vineyards, the river, Rudesheim and Bingen on the south side of the Rhine.

On the way up the cable car. 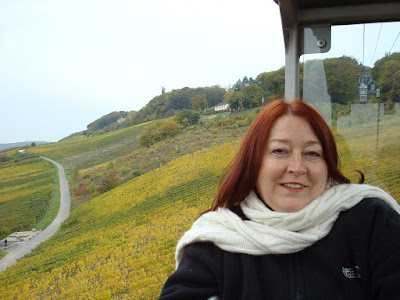 Getting close to the top. The Niederwalddenkmal is easy to see now. 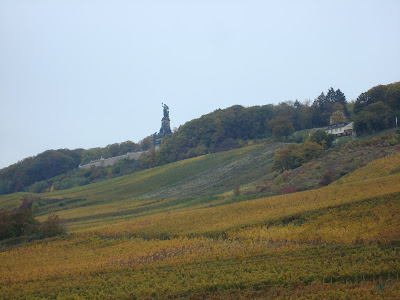 At the top end of the cable car is the Niederwald, a dense forested hill in the northeast elbow of the Rhine’s ninety degree turn north. At the top of the Niederwald is the Denkmal, a large Germania statue that overlooks the Rhine. This particular statue of Germania was constructed to celebrate the unification of the German states after their victory over the French in the Franco-Prussian War of 1870-1871. Here, Germania holds aloft the recovered crown of the empire. The Denkmal is a truly impressive statue and from this venue you can see 40-50 miles to the south. 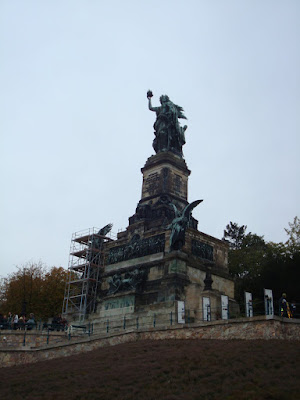 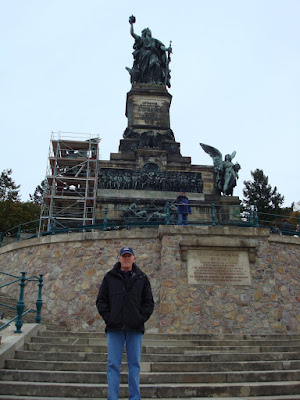 Going back down the cable car. Rudesheim and the Rhine River in the background. 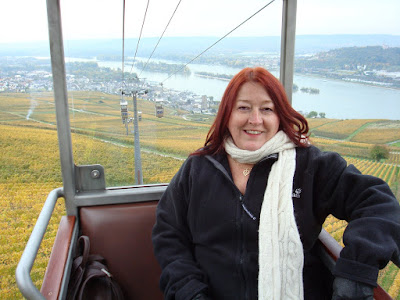 Once back down into Rudesheim we had a couple hours to kill before the Federweißer started at 1800 (6PM). That’s easy to do in Rudesheim because it’s a beautiful town with a very nice tourist area with lots of shops and places to eat and drink. So we visited a few shops, sampled some beer and wine and finally had another great German meal. I don’t remember the name of the particular gasthaus we ate in but one interesting thing about it was that they certainly had a thing for Jim Beam. They had all sorts of Jim Beam bottles, commemorative items, signs and advertisements; seemed like a strange place to find such a heightened interest in an American bourbon.

Jeff with a girlie beer (In size only.) 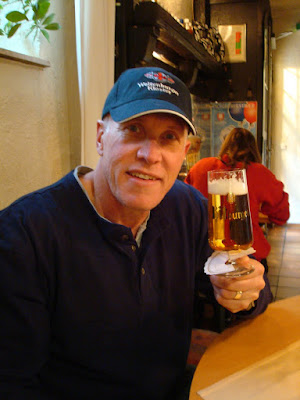 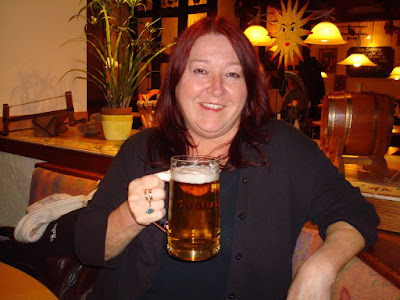 The Rudesheim Federweißer (feather white) which is a celebration of the neuerwien (new wine) took place in the main square of the town and was really a rather small venue; couple small kid rides, three or four wine vendors, couple food merchants, just a few craft sales booths and a maybe 20-30 mostly empty festival tables. The temperature was in the low 30’s so the turnout was rather low. But Jeff and I had our neuerwein, sat and listened to the music and then, because of the small crowd and low temperatures, started on our way home.

Kind of surreal image with the cloudy moon above the Rudesheim Federweißer. Those knarly trees are actully maple trees. Here in Germany, it's common, at least in the city squares and sidewalks, to cut them back that drastically each fall. 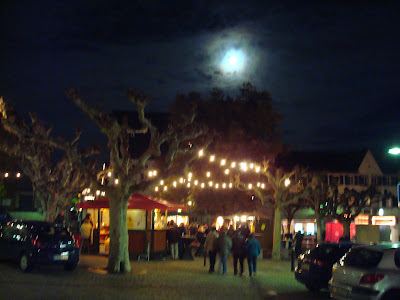 That's me in the middle of the empty fest tables. At least we got our seat of choice. 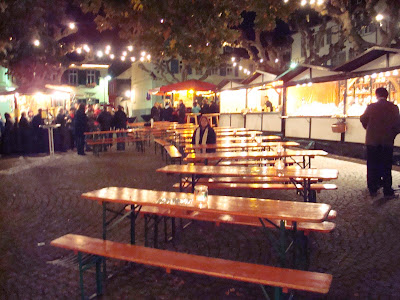 A short video where you can hear some rather different festival music.

Yes, that's Deep Purple, Smoke on the Water. (Just a recording. They weren't really there in Rudesheim.) Don't think we've ever heard that at one of these German fests before.

So it was a good day in Rudesheim and to top it off, one more fun ferry ride across the Rhine. 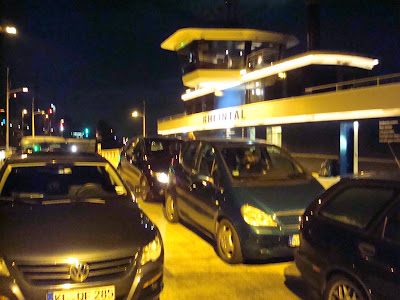