A week ago, Saturday, we drove to Idar-Oberstein to see the church in the rock. Like so many places we’ve been to laterly, Idar-Oberstein is just an hours drive from our home in Weilerbach. Idar-Oberstein lies deep in a the valley of the Nahe River which flow on to Binen where it joins the Rhine River.

Friends in Weilerbach had told us about the church in the rock, which is called the Felsenkirche. The story behind the church is that a man had fallen from a high precipice onto a ledge and survived. Because he was able to live through his great fall he took it as a sign from God that he must build a church on the very spot where his fall came to an end. Because his landing point was essentially on the face of a cliff, he decided to carve his church out of the rock.

The Felsenkirche was pretty easy to find once we got into the city. It does indeed sit on the face of rock cliff with two other castle ruins on nearby peaks. The church and the castle ruins are above the old town area which has a very nice shopping area. Most of the shops sell semi-precious jewels which Idar-Oberstein is famous and has long established the city as a gemstone center in Germany.

Well, here it is. The Felsenkirche sitting high above altstadt (old city) Idar-Oberstein. 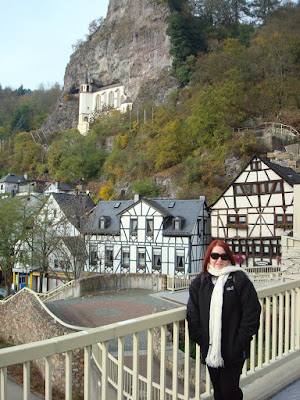 A closer look of the Felsenkirche. 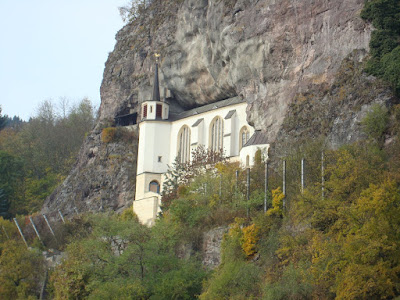 We took the steep steps up to the Felsenkirche for a walk through of the church. Then we followed a paved but still precipitous path up to the highest caste ruin, the Schloss Oberstein.

Schloss Oberstein high above the Felsenkirche. 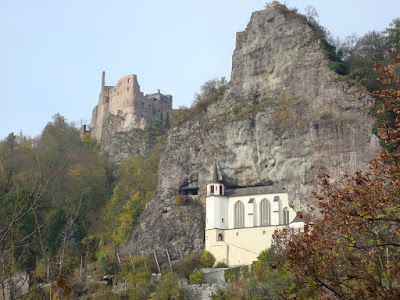 Felsenkirche above the shopping area of old town Idar-Oberstein. 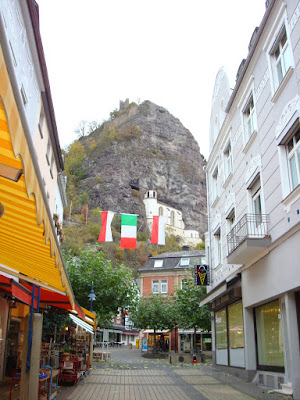 The tunnel stairways into Felsenkirche. 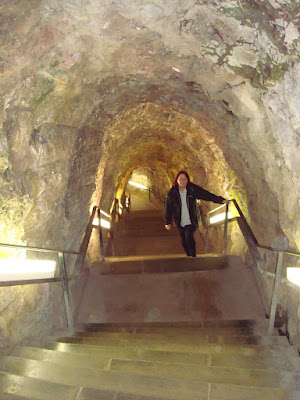 The steep path up to Schloss Oberstein. 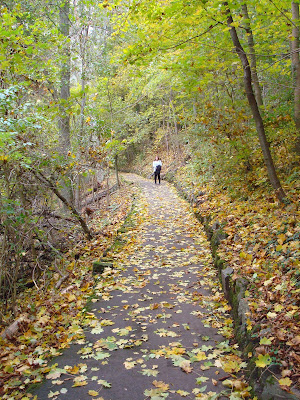 Idar-Oberstein from high above at the Schloss Oberstein. 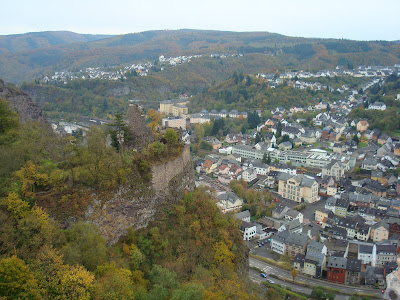 Once we were back down to city level we were ready to eat. We stopped at a pretty, half-timbered hotel and gasthaus which advertised that they were the original source of a common dish called Spießbraten. Spießbraten is a marinated beef or pork that tastes great no matter who serves it and, as usual, we had another great German meal there in Idar-Oberstein.

The drive home was interesting because we total relied on our GPS. It might have been the shortest distance but it certainly wasn’t the fastest since we ended up on some very narrow, very steep, very remote German country roads. But, it was fun and we passed through a good number of villages that we’d like to visit again.

One final tidbit, Bruce Willis was born in Idar-Oberstein.
Posted by Sandy and Jeff at Monday, November 01, 2010