It's Not Your Father's Autobahn

There are still sections of the German autobahn that have no posted speed limit which means you can drive as fast as you want; 120mph, 130mph even 150mph. However, because of posted speed limits, autobahn repair/construction and the volume of traffic itself, there are very limited opportunities to drive at those kinds of speeds. 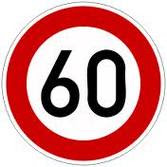 Posted speed limits are the biggest buzz kill as far as driving fast on the autobahn. The recommended speed limit even when none is posted is 130 kph (82 mph). But a posted limit of 130 kph is now very common. Now, if there’s a curve, a steep hill, an on ramp, autobahn junction, rough road or a bridge, there can be posted speed limits down to 100 or 80 kph and in some extreme cases, 60 kph (37 mph). If you see this 60 kph sign to the right, you're in for some really slow autobahn driving.

The Germans take great pride in the quality of their autobahn and, as a result, road repairs are a common issue here in Deutschland. On a recent trip back from Munich, a 250 mile drive, we encountered ten repair/construction projects that slowed the traffic to 60 – 80 kph. One, at the junction of the A-7 and the A-6 just east of Heilbronn, where three lanes went down to just one, resulted in a one hour delay.

Of course, on any road, including high speed autobahns there are places that increase the risk of an accident; curves, hills, rough roads, junctions, merging lanes and areas of high winds. Other than the rough roads there are plenty of all these issues in Germany and the authorities have become very serious about reducing autobahn speeds in these areas. Because of that it’s very typical to see no posted speed become a posted 130, then 100, then 120, then no posted speed, then 100 and then 120, all within just a few kilometers. Very high Talbrucken (valley bridges) are common in Germany and with them, quite often, soaring winds occur, so a posted speed of 100 kph is typical.

Germany is right in the middle of Europe and so there’s traffic from all parts of the continent driving to and through. There are big, long haul trucks from Norway to Portugal, Great Britain to Russia. Cars are small here but there are a lot of them. Natural traffic congestion areas even result in posted signs that warn of a Stau (traffic jam) and when you see one, plan on slowing down, maybe even coming to a stop. Even in the areas where there are no posted speed limits, slower cars or trucks passing even slower vehicles crowd the autobahns. So you might just get up to speed, 120mph, only to very quickly slow down for traffic.

This is the sign you want to see on the autobahn. No speed limit. Go as fast as you want. 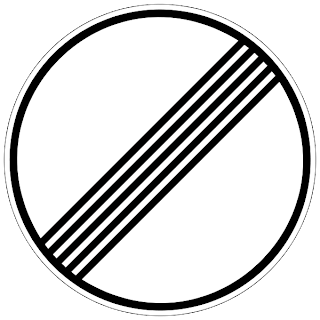 The autobahn can still be fun when you’re lucky enough to hit a long, open stretch of road with no posted speed limit. The best possibility of that is a Sunday, when those long haul trucks are not allowed on the autobahn unless they’ve paid a high price for a permit which very, very few of them do. But, if you’re making a trip of a couple hundred miles, there’s going to be points of frustration and delay, it’s just a matter of how much and when.

You run into some interesting things on the autobahn that result in a stau. The video below is what happened to us recently on Veterans Day just outside Ramstein Air Base.
The cause of this very slow, moving stau? An unannounced visit by the 1st Lady, Michelle Obama to Ramstein. During her short stay she traveled from Ramstein, across the the A-6, which is the autobahn in the video, to Landstuhl Hospital to visit some of our wounded troops. The German police shut down all access to the area around the autobahn where her motorcade crossed under the A-6.
Posted by Sandy and Jeff at Wednesday, November 24, 2010