We’ve been here, driving in Germany, just over three months and, to this point, we’ve received three speeding notices. I’ve gotten two, a 56 kph in a 50, and a 130 kph in a 120. Jeff got one for doing 60 kph in a 50. Translating kilometers per hour to miles per hour, my tickets were for exceeding the speed limit by 4 mph and 6 mph respectively. Jeff’s was also for exceeding the speed limit by just 6 mph. Really nothing all that excessive and maybe that’s why all three of our notifications were warnings rather than actual, much more costly, tickets. (A friend got a 136 kph in a 130 and a 140 Euro fine.) You’ll note that I’ve said notices, because in each case we were notified by mail of the incident and fined 15 Euros. Typically, here in Germany, you’re notified by mail of a speeding incident because most tickets are now the result of being observed and photographed by an automatic, remote camera.

The German police use a number of different types of cameras. They have permanently fixed cameras that may be placed in an actual speed limit sign, in a very nondescript gray cylinder or a simple box on a pole. They have portable cameras that they can quickly put up and take down so that they can place them at any location where they think there may be a speeding problem.

The autobahns have these high tech speed limit and traffic advisory overhead signs. They can change the speed limit based on traffic and conditions. Some of these also have a speed camera conveniently placed inside. 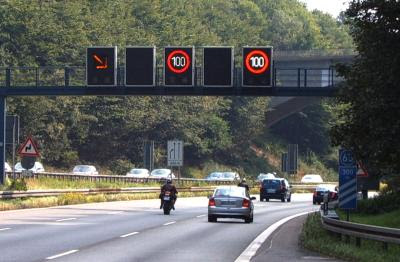 See that gray column with the dark stripes on the right. That's a permanently placed speed camera. They put them in between traffic directions so that it can photograph speeders no matter which way they're driving. 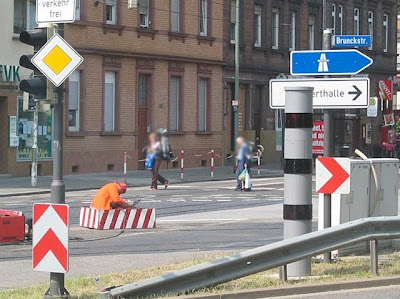 Speed box on a stick. 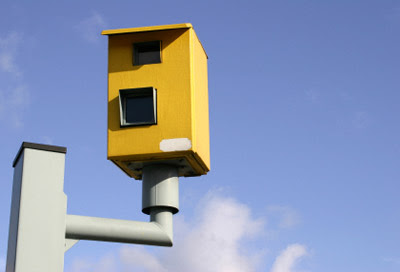 This is what the portable speed camera looks like but when the police put them out it's not placed this obvious. The portable camera is well hidden until the very last second. 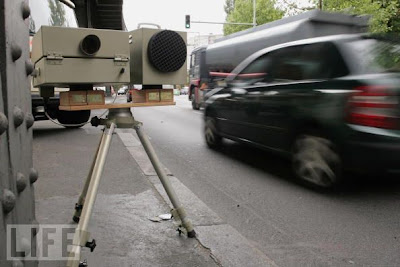 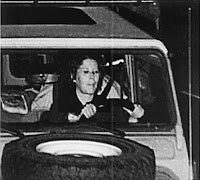 The Germans call being observed speeding by one of these cameras as getting “Flashed” because, as you pass, if you’re speeding, a very bright flash can be seen as your picture is taken. It’s so bright you have a pretty good idea that you just got caught. When you receive your speeding notice in the mail, in addition to your license plate number, there will also be a little fuzzy picture of you sitting there behind the wheel of your vehicle. That's not me in this picture but it shows just about what your picture looks like when you get your speeding notice.

In some ways, Germans aren’t very different from Americans. They can get pretty angry about a speeding ticket too. Because these portable, remote cameras are place and leave devices, left completely unprotected, there have been a number of incidents after being flashed where a German driver became so incensed that they turned around, returned to the camera and proceeded to destroy it with a club or axe or setting it on fire.

We think because of these speed cameras, most Germans are much more diligent about adhering to posted speed limits, especially if there’s a permanently placed camera that’s become well known to the local drivers. There’s a bridge over the Rhine River between Mainz and Wiesbaden that I’ve driven across hundreds of times to and from work. Twenty years ago the traffic flew across that bridge, ignoring the posted speed limit signs. Just a few weeks ago, driving across that same bridge, we noticed the traffic was moving along right at the posted speed, 80 kph, then, when passing a new speed limit sign, slowed to 60 kph as we approached the north side of the river. Sure enough, right there on the barrier between the two directions of traffic was the infamous nondescript gray cylinder.

Well, I was just about done with this blog but guess what just showed up in the mail, speeding notice #4, 76kph in a 70. Again, just 4mph over the speed limit. 10 Euro fine. Just another case of the Deutscher man keeping us down.
Posted by Sandy and Jeff at Thursday, November 18, 2010