Lots of folks have been telling us how great Heidelberg is. What a great shopping plaza it has. How pretty it is. In spite of the fact that we had lived only an hour from the city during our last assignment in Germany, we’d never been to Heidelberg. So, we fixed that last weekend.

Our town, Weilerbach, is in the Kaiserslautern area which lies in the high terrain about 20 miles from the western rim of the of the Rhine valley. Heidelberg straddles the Nekar River, which flows into the Rhine about ten miles northwest of the city. Heidelberg is located at the very eastern side of the Rhine valley at the foot of the Odenwald, a low mountain range, which actually comprises the eastern wall of the valley.

Well, everything we’d heard was true. The altstadt (old city) part of Heidelberg was beautiful. The fall colors along the Neckar River made the Alte Brücke, (old bridge), Brücketor (bridge gate) and Schloss Heidelberger (Heidelberg Castel) even more magnificent. The shopping plaza, which stretches for over a half mile along the western end of Hauptstraße (Main Street) has wonderful shops, gasthauses, hotels, small food vendors and more.

We parked near the Bismarckplatz at the western end of Hauptstraße and started our walk allow the shopping plaza. Although it was busy, the number of people still allowed an easy stroll along the street. We stopped and got a fresh, warm brezel and then sat in a great gasthaus which quite happily served Kloster Andechs Spezial Helles, a light, crispy lager beer. Since the street has a very slight rise, you can see a good distance down the shopping plaza and see the great number of people out enjoying the day, plus all the terrific, old structures that line both sides of the avenue.

A Bismarck bust in Bismarckplatz. 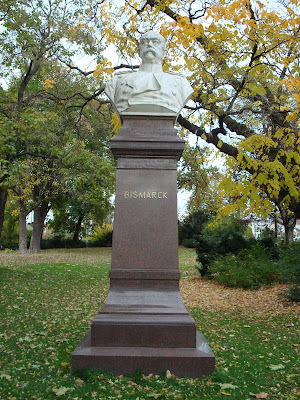 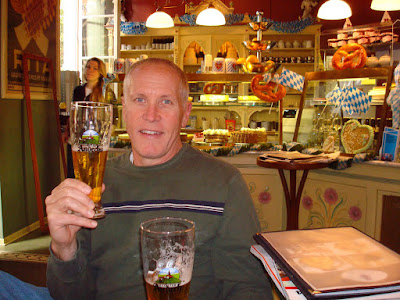 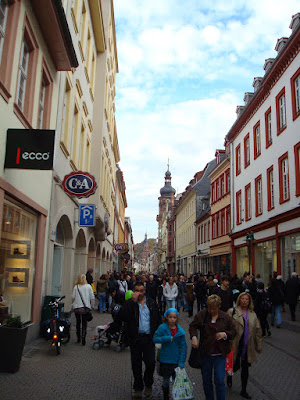 The eastern end of the market street is dominated by the Heiliggeistkirche (Church of the Holy Spirit) which commands the sky line in this part of the city. Interestingly, pretty much around the entire perimeter of the church, right at the foundation of the building, there are souvenir booths, small book stores and even tiny cafes.

Just north of the Heiliggeistkirche, on the Nekar, is the Alt Brücke, a beautiful bridge spanning the river. On the south side of the bridge is the Brücketor, a unique gate that leads into the old city of Heidelberg.

Alt Brücke (Old Bridge) over the Nekar River. During World War II, retreating German forces blew up three of the spans on the bridge. 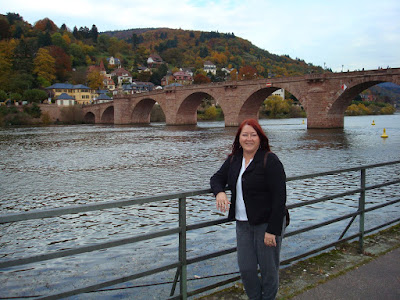 From the bridge, pass through the Brücketor (bridge gate) to enter the old city of Heidelberg. 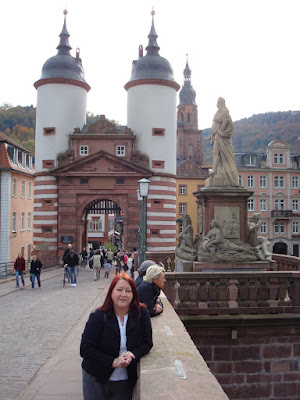 Not sure what the significance is of this strange brass monkey statue which is located at the base of the Brücketor. 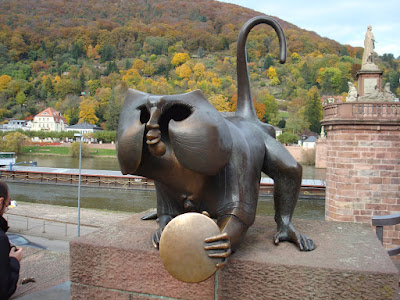 Just southeast of the Heiliggeistkirche, on the high ground above the city, known as the Königstuhl (king’s throne), is Heidelberger Schloss, a very large Renaissance castle ruin. Quite obviously, from the visible building styles, portions of the Schloss were built at various times over the centuries. We didn’t have time to visit the castle this trip but now that we’ve been to Heidelberg, we’ll be back. 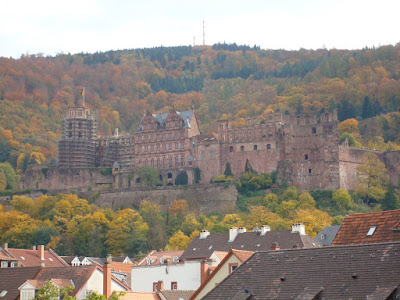