November 11, 2010, Veterans Day. Jeff and I drove to St. Avold, France to visit the Lorraine American Cemetery and Memorial, the largest U.S. Military cemetery in Europe. St. Avold is just across the French border from Saarbrucken, Germany, just an hour from our house. It was a windy, chilly day but, being there among the thousands of our fallen countrymen, was a warm, proud and humbling experience.

Entrance to the Lorraine American Cemetery and Memorial. In St. Avold, France. 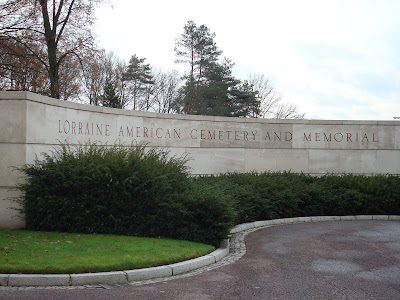 There are 10,487 American servicemen buried on the 113 acres of Lorraine Cemetery. Among them are four Medal of Honor recipients, thirty sets of brothers and 151 unknowns. This French land was given to the United States in perpetuity as a gesture of thanks and a means to honor our courageous military men who fought for a cause much bigger than themselves and, in so doing, freed a continent. Most of the men buried there were killed in the last months of 1943 and early months of 1944, just a short time before World War II would come to an end, when they would have been going home.

There was a short, unofficial ceremony in which the American Legion laid wreaths in the cemetery chapel. An American Legion pastor said a prayer, read the Presidents Veterans Day greetings and spoke a few words about the gallantry and sacrifice of the men that fought the evil and tyranny of Nazi Germany on the very soil where we stood.

The rows of American heroes buried at Lorraine Cemetery. The cemetery memorial chapel is in the background. 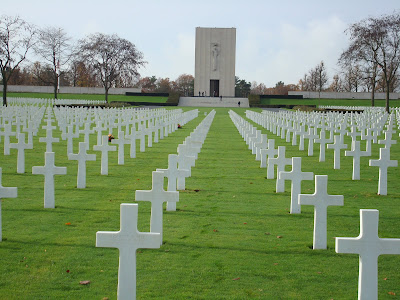 Our World War II servicemen were laid to rest facing west, and home. 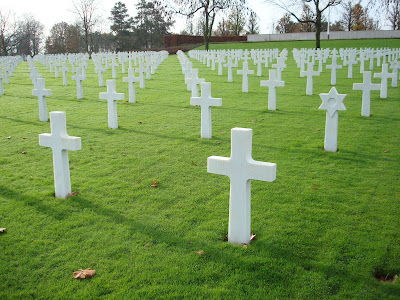 The grave of an unknown American. 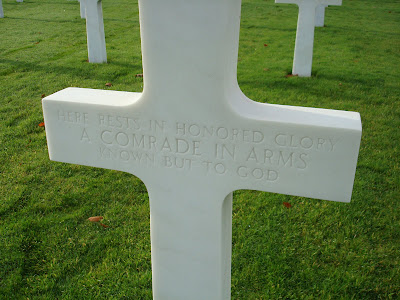 It was such an honor to be there with other Americans, mostly military personnel and their families, from the nearby bases in Germany. Nothing had been formally organized, they all had taken their own time to drive to France to pay their respects. A few American motorcycle clubs from Ramstein, Mannheim and Heidelberg made the cold ride to the cemetery too. 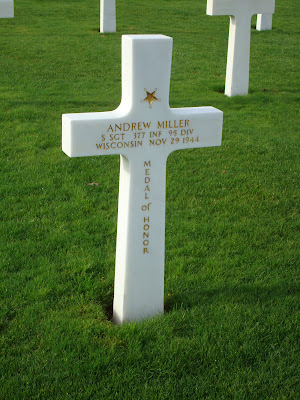 An important note about Veterans Day. We are not the only country to honor our military members on November 11. On this same day, among the World War I allied members of Europe, whether it's called Remembrance Day or Armistice Day, they stop to pay respect to the millions of their best and brightest, an almost entire generation, who died in that first, great, brutal war of the 20th century.

Click on these pictures to better read the engravings on the walls of the memorial chapel.

The back, east wall of the chapel. 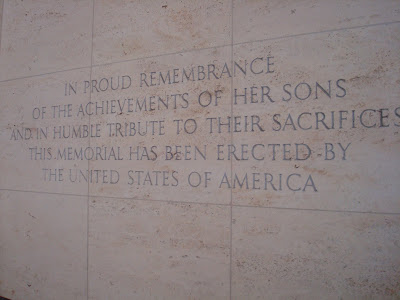 The north wall of the chapel. 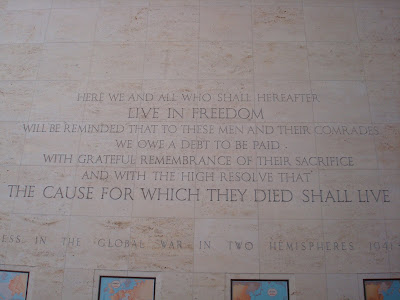 A huge map depicting Allied operations across Europe on the south wall of the chapel. 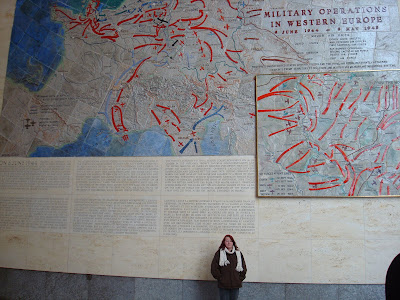 The front, west wall of the chapel. The figures here personify the eternal struggle for freedom. King David, Emperor Constantine, King Arthur and George Washington reinforce the youthful figure in the center. 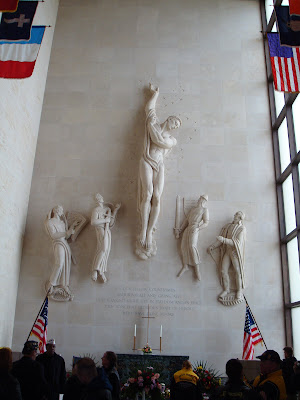 The wording on the west wall below the five figures. 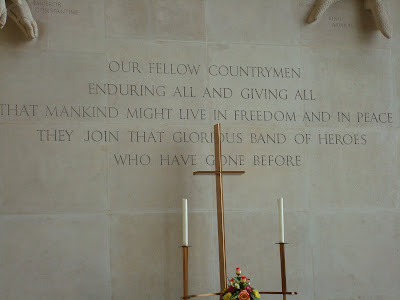 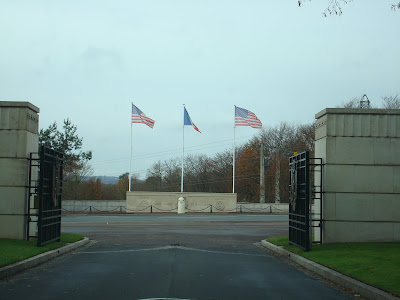