In addition to all the US military members, there are folks stationed here at Ramstein from most of the member NATO countries. Some of those member countries have such a large contingency of people that they require their own building, or at least a significant part of a building. Of course the Germans have a significant presence here and occupy a couple buildings. The Brits and the Canadians share a building. The Belgium military has their own small building. 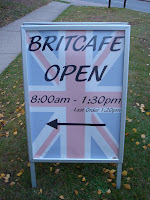 Just like the US military, these other NATO members like to bring a little bit of their own country to the assignment here in Germany. In the Brit/Canadian building there’s a small British store where they, and we, can buy an assortment of UK favorites, including liquor, tea and biscuits, meat pies and much more. On the second floor the Canadians have their own store too. Down the hall from the Brit store is a British cafe where you can get a typical English breakfast or lunch. Even though we’re smack dab in the middle of Germany, the Germans want a bit of Deutschland on Ramstein too. In the German complex there’s a great gasthaus, the Deutsches Haus Ramstein, where you can get all the schnitzel and German beer you desire at a price that can’t be beat. The Deutsches Haus is so popular that they’re expanding the facility. Each one of those places has its own unique atmosphere but probably the most fun of them all is the Belgium bar. 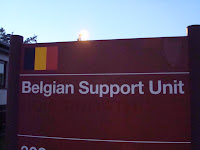 Located in the back side of the Belgium building is the Belgium bar. Although it has opening hours each day of the work week, Tuesday and Thursday are the most popular evenings when the bar is open until 2200 (10PM). Thursday seems to be the most well attended night because it’s 50 cent beer night. On any given Thursday night you’ll see a wide cross section of ranks and countries. Of course, there will be folks from Belgium, Germany and the US but also Poles, French, Brits, Canucks, Dutch, Norwegians etc. There’ll be a three-star general, two-stripe airman and everything in-between. There’s a wide range of Belgium beers from the 50 cents a glass, light lager, Cristal, to a dark Leffe, Chimay and an assortment of the favorite Belgium fruit beers.

You always know if the bar is open when you walk up to the building. 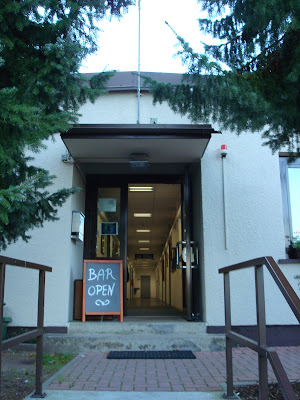 Pretty obvious walking down the hall where the bar is located. 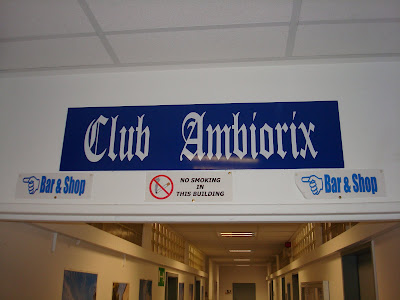 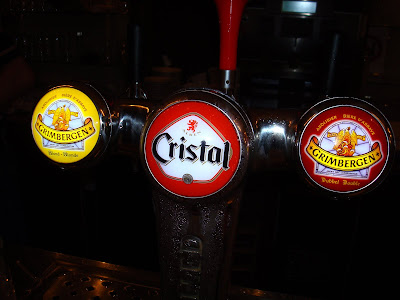 One of the coolest things at the Belgium house is how they pour their beer from the tap. Once they have a full glass, with a big head of foam, they take this flat edged utensil and knock off the head by sliding this knife like object across the top of the glass. I think the only place I've ever seen this done is in the movies. It's certainly not something that's done anymore in the States. Just a cool little custom.

Knocking off the head. 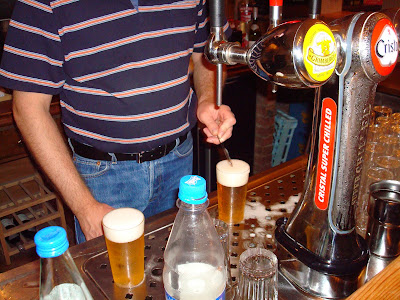 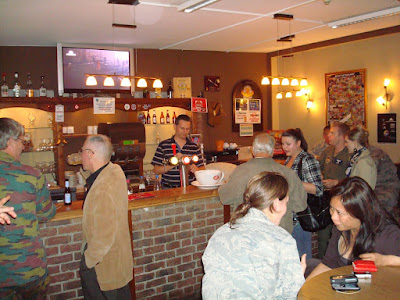 A great, late Thursday afternoon trip is to stop in the English store for some tea bags, then a couple beers at the Belgium bar and finish up at the Deutsches Haus Ramstein for a great German meal. Hopping all over Europe right here at Ramstein.
Posted by Sandy and Jeff at Friday, November 12, 2010