A Day on the Rhine & More

Sort of a slow weekend this past Saturday and Sunday. On Saturday we drove up to the Rhine River for some leisurely sightseeing. We hadn’t been up that way in over a month and the appearance of the vineyards, now scarlet and gold, on the way was quite striking. Really pretty. We crossed the Rhine from Mainz to Wiesbaden and stopped at a favorite Imbiss of ours, Walters, for a bratwurst and pommes frites. Then we drove out towards Rudesheim, didn’t stop there though since we’re planning on going to their festival this coming weekend. We drove along the Rhine until it makes its near ninety degree turn towards the north. Drove through the towns of Assmannhausen, Lorch and Lorchhausen before stopping in Kaub for a couple Bitburgers. The weather was a bit dreary with a light drizzle and low clouds hanging over the Rhine valley but it still made for an enjoyable day.

Right there at Kaub we caught a ferry across the river which is always a bit of an adventure. It’s amazing to watch the ferry captain maneuver his vessel across the Rhine, dealing with large cargo barges and tour boats. Once across we drove south just a few miles to one of our favorite little towns in Germany, Bacharach. 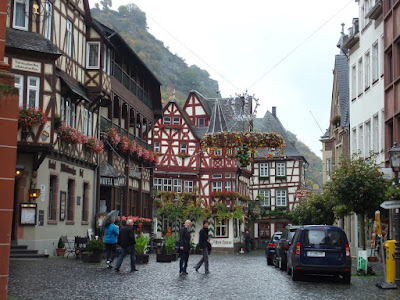 Bacharach has some of the most amazing half-timbered buildings that lean and twist after hundreds of years of stress and wear. We stopped in at another favorite spot of ours for some zweiblekuchen (onion cake) and neuerwein (new wine).

Even a back alley view shows the beautiful half-timbered buildings. 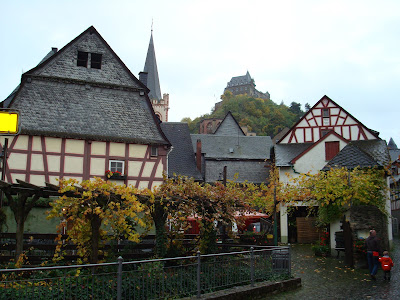 Both of these early fall favorites, not surprisingly, inspire whole festivals. There’s a number of Zwiebelkuchen festivels in various towns. Neuerwein festivals are plentiful too, many of these are called Federweiße (feather white) festivals, referring to the light white color of the this milky white wine. Neuerwein is the first taste of the just harvested grapes that have been slightly fermented after just a few weeks in the vintners vats. It tastes a little sweet and very different from what it will be like after its completed the longer fermentation process which occurs over the winter and spring.

You can see the milky look of the Neuerwein here. The Zwiebelkuchen, obviously, has an onion flavor but there were bits of ham (gotta get that pork in there somewhere) in it too so that it had a sort of quiche flavor. 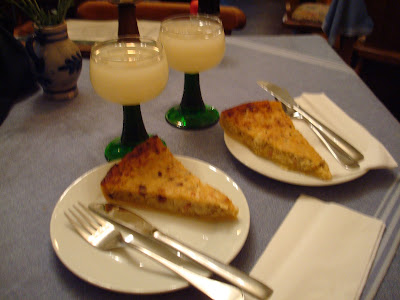 We started the hour long drive home by driving south along the Rhine toward Bingen. It was early dusk and the images along the Rhine valley in the fading light were simply beautiful. Still visible above the lights of the villages and boats on the Rhine, the vineyards covering the valley walls with castle ruins made the whole vista an awe inspiring sight. 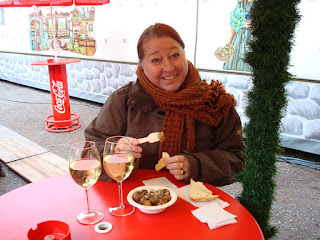 We stayed up late Saturday night, 2AM, watching the Texas Rangers kick some New York Yankee butt so we got started late on Sunday, but we were able to take in a local festival. Kaiserslautern is having its ten day fall festival. It takes place in their Messeplatz which is about a twenty minute drive from our house. We drove down for a just a couple hours of mostly the same kind of festing stuff we’ve been telling you about over the last few weeks; rides, wine, beer, pork of all sorts. But, the weather is getting cooler (Here's a picture of me all bundled up.) and some of the winter delights are starting to appear, like Gluwein and roasted chestnuts. In addition to some sauteed champigons (mushrooms, also in this picture, yummy!!) and garlic cream, I had a Frikadelle, a kind of spicy meatloaf, sandwich. We were home in time to watch the early round of NFL games which start here in Germany at 7PM.

We were only at the Kaiserslautern fest for a couple hours but there were still some fun and interesting sights. Here's a few of them. 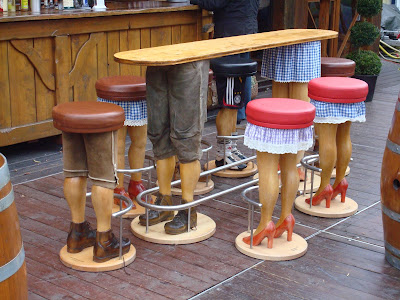 Special toilet for kids. That's a little toddler with his cell phone sitting on a chamber pot. Kind of connects the old with the new. I'm sure that later in the night you'll see plenty of dads coming out of here. 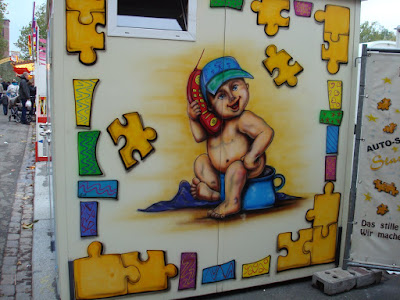 The two doors to the kid toilet. The one of the right speaks for itself. The left one translates to "Quiet Wind Area." Funny! 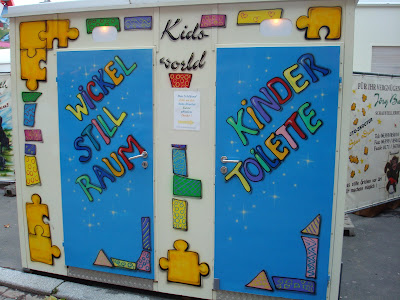 There's always one of these at every fest. The Kräuter (herb) Bonbon vendor. They sell very strong licorice and anise candies that have an overwhelming smell. Jeff can't stand the smell. He always holds his breath when we walk by these places. 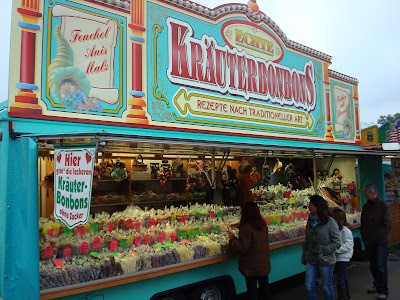 When was the last time you were at a festival and were able to buy a big ass forcep like this? This vendor was selling all kinds of medical and dental tools. 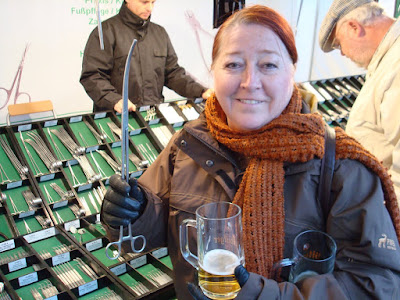 The Germans are hardy festers. You can see it's an overcast, chilly day. No problem. They're still going to have a cold beer and get on those rides. 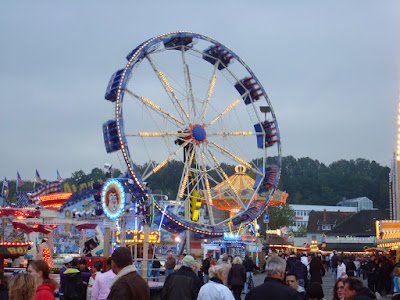 Man, I just read through this entry. It almost sounds like we’re losing momentum. Not to worry, we'll push it up next weekend.
Posted by Sandy and Jeff at Tuesday, October 19, 2010