For years we've been told by some people, Americans and Germans alike, that they don't like to go to Oktoberfest; too many people. Interestingly, a lot of these same folks have told us to go to the Stuttgart beer festival. They say there's fewer people and the beer tents are just as much fun. So, a beer fest with no crowds? Well, since Jeff and I now live just two hours from Stuttgart we decided to go see for ourselves. 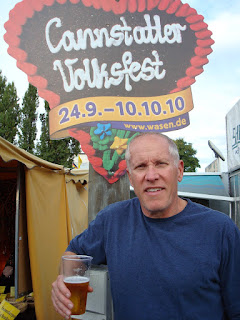 To start with, the Stuttgart beer festival is actually called the Cannstatter Volksfest. It's held in a part of Stuttgart called Bad Cannstatt on the Cannstatter Wasen festival grounds which is why the locals refer to the fest as Wasen. The Wasen has seven main beer tents. Three are comparable in size to the big Oktoberfest tents but without the big outside seating areas. The other four Wasen beer tents are half to two-thirds the size of Oktoberfest tents but, again, with really very little outside seating.

Although it had rained constantly on the drive down, the rain was done for the day just as we checked into our hotel. Jeff and I arrived at the Cannstatter Volksfest and walked into the Fürstenberg Fest Tent at about 1130 on an overcast Saturday morning. Every table in the tent was reserved at some point in the day so we sat down on an empty table that said it's reservation time wasn't until 1630 (4:30PM). We had a great time. Had a few beers, talked with some nice people. At two o'clock we decided we wanted to see some of the other tents so we left the Fürstenberg tent. That may have been a mistake because it was the last tent we were able to get into for the rest of the day and night.

Here's what it was like in the Fürstenberg Fest Tent at 1145 in the morning. If you're familiar with Oktoberfest tents, you might be able to see this tent and bandstand are both smaller. 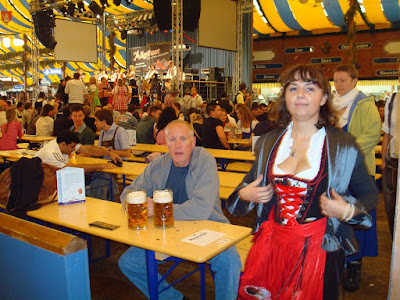 I took this picture just after we sat down in the Fürstenberg Fest Tent. Although it was going to be a picture of Jeff smiling with our beers. I took it early when I saw this opportunity. Jeff always says flexibility is the key to success and he thought this was a very successful picture.

Of course, while we were wandering around the Wasen eventually we needed a toilet and that turned out to be a problem. The toilet locations were not easily marked and there certainly weren't enough of them. In fact, it wasn't uncommon at all around the perimeter of the festival grounds to see guys relieving themselves against a wall or behind some available structure of some sort. 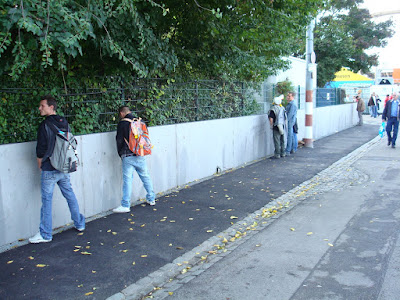 We did have a lot of fun at the Cannstatter Volkfest but when comparing it to Oktoberfest our misgivings about the Wasen, the Stuttgart beer festival, is ability to access the festival tents and the lack of toilets. 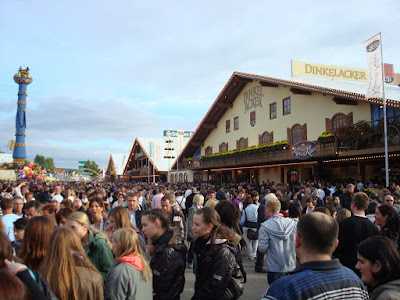 Three of the big tents at Cannstatter Volksfest.

After early afternoon, in Stuttgart, if you don't have a table reservation, you don't get in a festival tent. All tables are reserved. Plus, what little outside seating there is at the Wasen is also controlled access by security. Big, disorganized groups of people were, standing waiting at the entrances to each tent. I talked with one of the security people and she said just what we suspected; no reservation, no entry. At Munich's Oktoberfest, there are large outside seating areas around every tent that are not reserved and easily accessed. Inside, there are always tables that are not reserved and we have never been denied entry to a tent at Oktoberfest, day or night, with or without reservations. 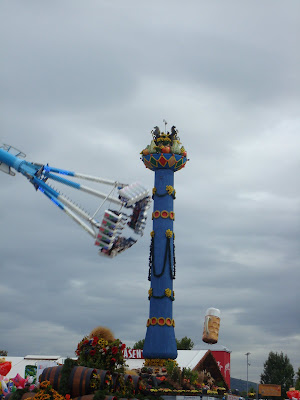 This big blue object is called the "fruit column." It's a quasi-permanent, fixture and symbol of the Wasen. That other thing is one of the hairy rides that you find at almost all the big festivals here in Germany. 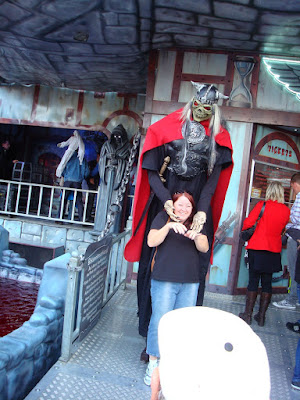 They always have a House of Horrors at these festivals too. The one here in Stuttgart is probably the best we've seen in Germany, at least from the outside. I don't like to get scared and this big creature outside gave me the creeps. Notice the pool of blood to the left.

The toilet situation at Stuttgart is inexcusable. Way too few and not always that easy to find. Even in the tent we were in, although the toilets were well kept and clean, they should have been twice the size. Out on the festival grounds the lines for toilets were long and, as I mentioned, resulted in plenty of men just finding their own solutions elsewhere. In Munich's Oktoberfest there is no toilet issue. In the tents the toilets are huge and clean. Behind every tent is another toilet facility that allows you to walk outside, get some fresh air, while doing your busy than walk back in. On the Oktoberfest grounds toilet locations are well marked and plentiful, resulting in little to no lines. 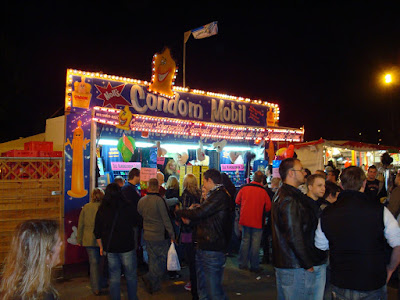 Here's something you won't see at most carnivals and fairs in the U.S. A condom vendor. 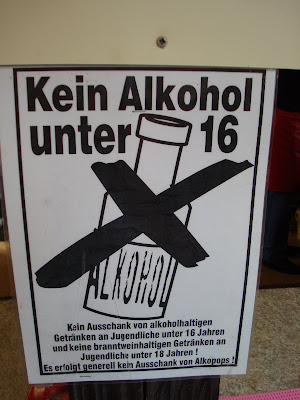 In case anyone was wondering, the legal drinking age in Germany is 16. Very strange to see some of these inebriated youngsters.