WOW!!! What a wonderful week we just experienced!!!

Once everyone had arrived, one couple from Brussels, one right here at Ramstein and everyone else from the States, we drove to Bad Durkheim Friday for that city's 594th Wursmarkt, the world’s largest wine festival. We stayed at the Kurpark Hotel in Bad D, just a short walk to the festival grounds. The weather was as perfect as perfect could be. We spent two incredible nights drinking the wines of the Rhineland-Pflaz, some always great German beer, eating some of the most scrumptious food imaginable and enjoying the company of good friends and a couple new acquaintances. 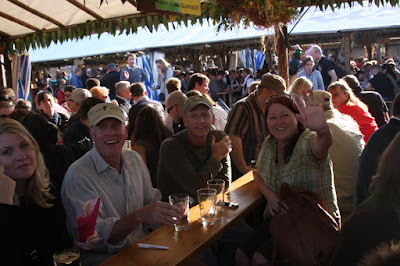 Rachel Mitchell, Jeff, Mike Franklin and I at our favorite vinter tent, #15.

The video below has a great image of the size of the wine glasses at the Wurstmarkt. Watch for the Jeff on the right and the glass of wine he's holding. You also can see the traveling band that's been performing here ever since we first visited the Wurstmarkt in 1988. Probably the same guys. 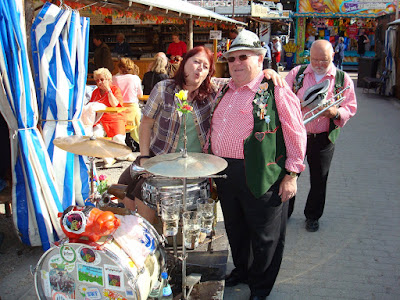 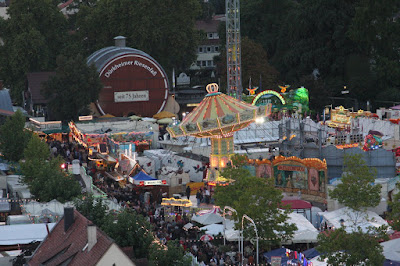 A great view of a small part of the Wurstmarkt festival grounds from the top of the ferris wheel. 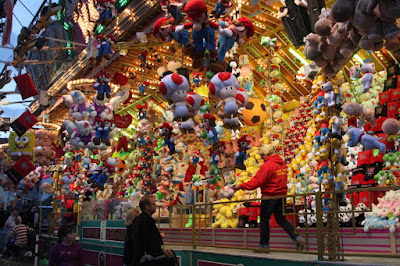 The colors and sound at these festivals is just mind boggling; in a very fun way. 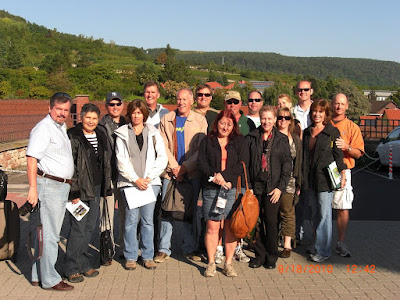 On Sunday we drove to Nürnberg for some sightseeing in the old town, Nürnberger sausages and, again, some great German beer, at the Altstadthof. After a walk through the Kaiserburg (Imperial Castle of Nürnberg) we drove out to Lengenfled, a village southeast of the city where the Winklerbrau gasthaus and brewery is located. An incredible meal and, of course, a great German beer, Winklerbau Dunkel, served in the world’s greatest beer glass, made for a most kickass night. 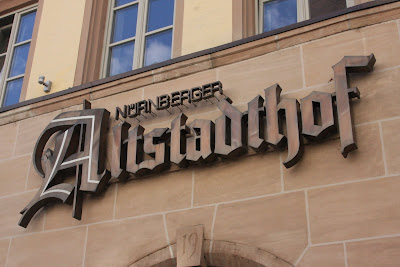 Just below the Kaiserburg is the Aldstadthof a great gasthaus and brewery. If you want a bottle of their beer you need to be ready to step up. It's only served in liter bottles. 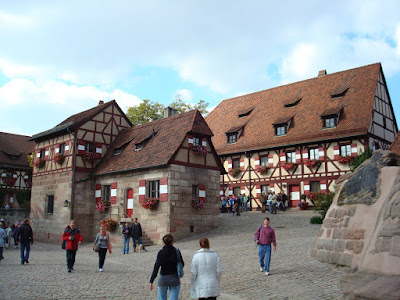 Incredible architecture inside the Kaiserburg. 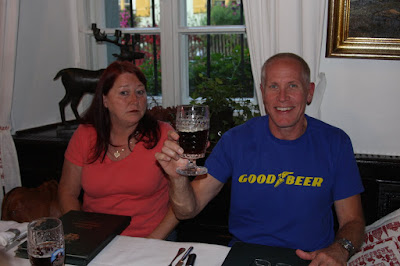 I think Jeff's expression and shirt make it quite obvious how we enjoyed Winklerbrau. By the way, Jeff's holding the world's greatest beer glass full of Winklerbrau Dunkle.

Monday we drove to Munich but along the way we had quite an adventure. First, we stopped at the oldest monastery brewery in the world, Weltenburg Kloster which sits on the shores of a majestic bend of the Donau River, better known as the Danube. We were a bit surprised when our GPS took us to a point on the wrong side of the river, just across from the Kloster. But, a quite unique ferry took us across the Donau and, once there we enjoyed a great German beer in a place that’s been brewing since 1050. From there we drove on through the Bavarian countryside with a stop for pictures in a hops field. Our last stop before Munich was at Weihenstephan, the world’s oldest brewery, beginning operations in 1040. More great German beer. Finally in Munich, we checked into our hotel, just a block from the Marienplatz and two blocks from our destination for the night, the world famous Hofbrauhaus. Even more great German beer and stupendous food. 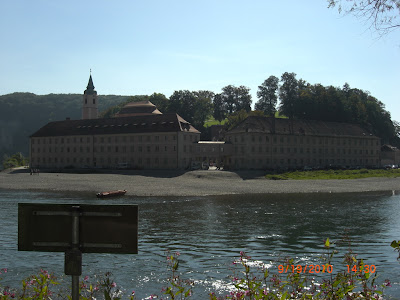 Weltenburg Kloster from the wrong side of the Donau (Danube)River. 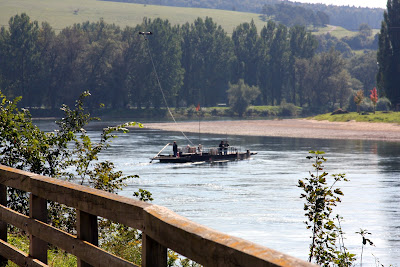 Luckily, a convenient and quite unique ferry, was there to take us across the river. It has no power, connected to a cable across the river uses the current to go back and forth. 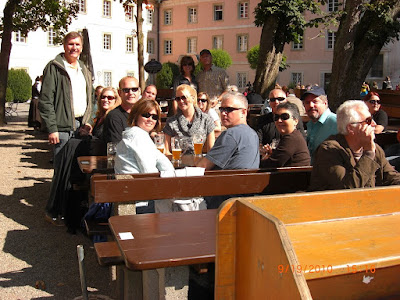 The Weltenburg beer garden. What a great concept, religion and beer. 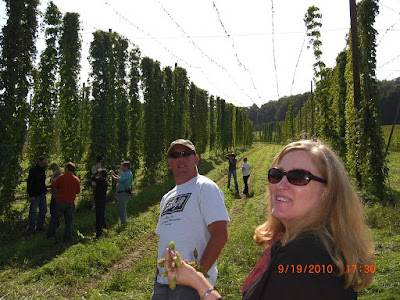 Quick stop for a photo op in a Bavarian ops field. 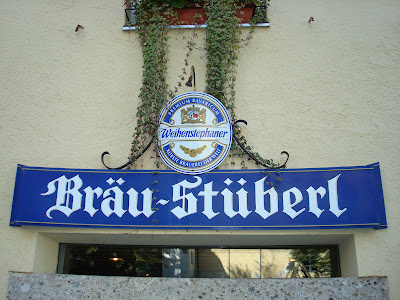 Finally, passing through the sacred door of the world's oldest brewery, Weihenstephan. 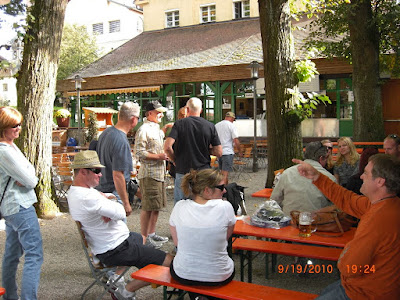 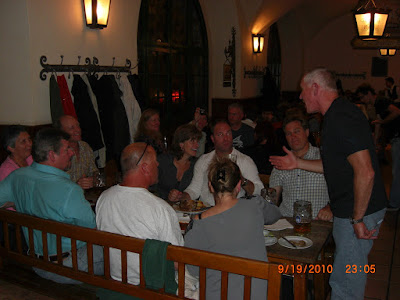 Monday night in the Hofbrauhaus. Prepping the group; Rowdy explaining the proper Oktoberfest etiquette for Tuesday and Wednesday night.

Tuesday we got out to the Oktoberfest grounds early so that we could see all the tents, rides and special sights that can only been seen at the world’s largest party. At 4PM we took our seats at our reserved tables in the Hofbrau festival tent. What a wild, wonderful night!!! 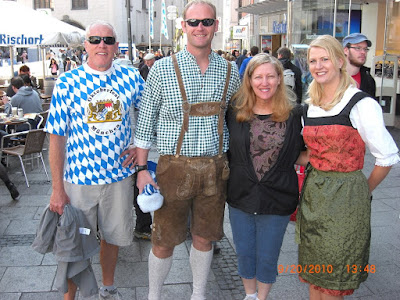 In Munich's Marienplatz. About to get on the underground and begin our short trip to the Oktoberfest grounds. Jeff, soon to be Rowdy, McGraw, Peggy, Rachel, soon to be Holly (her new party alter ego). 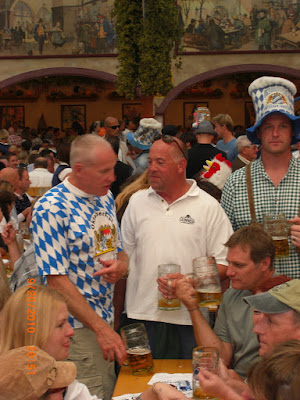 In the Hofbrau Fest Tent. Rowdy, Chris, and a stoic, somewhat goofy McGraw.

Wednesday, some of us walked into the English Garden to visit the Chinesischer Turm (Chinese Tower) and Munich’s largest beer garden. On the way back to the hotel we discovered the the mid-70 temperatures and warm sun brought out the sun worshipers. Yes, nude sun bathers, However, the somewhat disappointing and disturbing thing was that they were all men. That night we were in our favorite tent, Löwenbräu. Another maximum fun night. 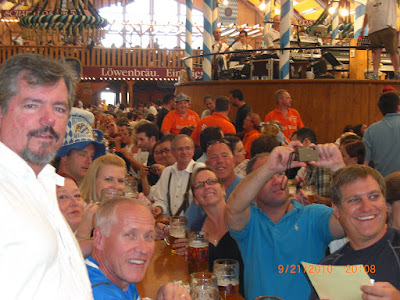 In the Löwenbräu tent at our regular table. Look how close we are to the bandstand. L to R, Mike, Me, McGraw, Rachel, Rowdy, (some Deutscher in white shirt) Jodie, Chris, Scott, Wally. 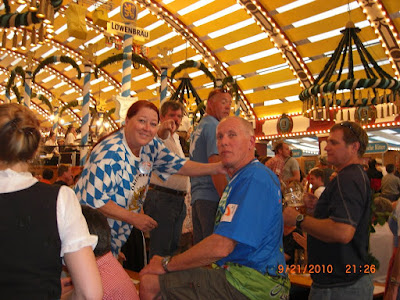 OK, done eating. Time to get up on the benches and have fun. 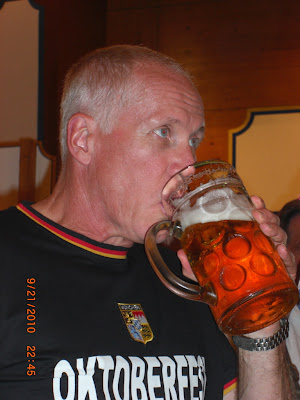 Thursday everyone went their own way; some back to the States, some to Prague, some to Garmisch. Jeff and I drove back to Weilerbach. In spite of where each one of went, I have no doubt that everyone of us left Munich with fantastic memories of a unique, world’s greatest week. 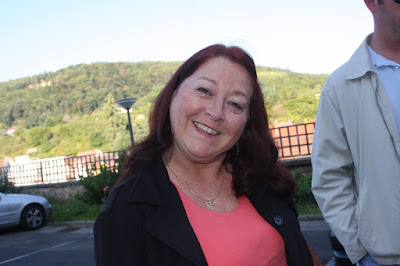 What a happy week and I think everyone else left feeling the same as me.

Did I mention we drank some great German beers?