Two things Germans like as much as beer and schnitzel is walking and dogs. Around Weilerbach there are endless walking/biking trails, most of them paved. We can go in just about any direction for miles and miles and miles, or more correctly, kilometers and kilometers and kilometers. Anytime we're out for a run or a walk we'll pass any number of Germans out walking their dog, and they're not out for just a walk around the block. It's more than likely a minimum two kilometers.

Another thing Germans are very conscious of is the environment, as mentioned in my last blog. So when it comes to walking their dog there's always the issue of dog crap. Close to the town, on the walking paths, they will place signs to remind folks that if your dog takes a dump you better pick it up. Here's the do-not-allow-your-dog-to-shit-here sign. Pretty obvious. No words needed. 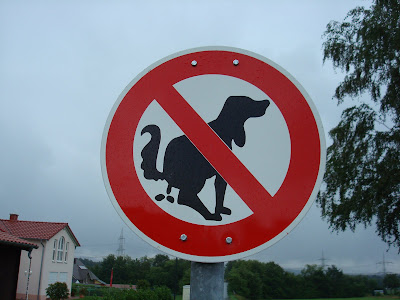 Now, once you get out further from the towns and villages, where the paths run along and through farmer's fields, they'll put a sign up to let people know that it's OK for their dog to let loose at any point, with no need for human involvement as far as cleaning up. Here's that sign. It translates to "here I may" which, of course, simply stated means good-to-shit zone. 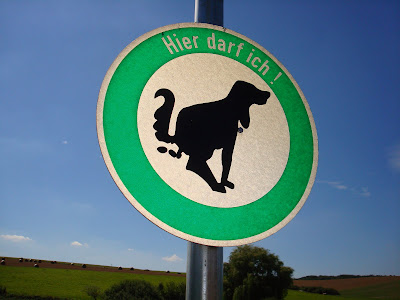 Here's a very interesting side note to this whole thing. This isn't just hearsay either, we've seen it more than once. Germans will pick up after their dog in the no-shit zone, even if their dog has done its business off the path. Yeah, that's right. Picked it up right out of the grass. Now that's adhering to the letter of the law. ICK!!
Posted by Sandy and Jeff at Saturday, September 04, 2010