Sandra is in London with Megan. They're there, technically, to visit family but it's really just an excuse for them to get some steak and kidney pies and rage around London. So, since she's not here, here's my comments on a very important subject.

Running in Germany is kickass!! There are paved paths that seem to run between every little village and town. They are well marked too so that folks can easily determine where they want to go. Even when the paths are not paved they are mostly crushed stone so mud and pools of water after a rain are minimal. Here's a few pictures from one of my favorite running routes. Sandy and I walked it so that we could get these photos.

This an opening through the trees at the top of a hill just a short distance from our house. It's an invigorating sight to see the trees part at the top and open to an awesome view of the German countryside. 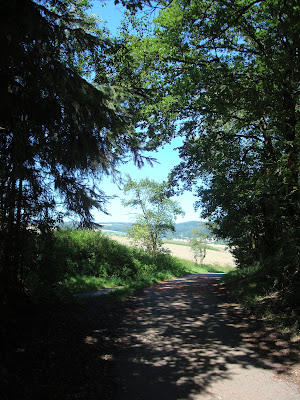 Here's the other side of the same hill. If you look over my right (click on the photo for a larger image)shoulder you can just make out the huge wind generators that are now all over the German landscape. 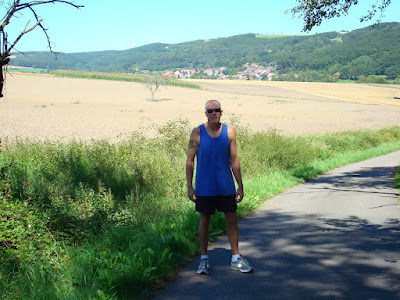 A lot of this run is through farmer's fields, but all of it paved. However, as you can see above, a lot of it is through the forest. Here's an old abandoned bridge that the path takes me under. 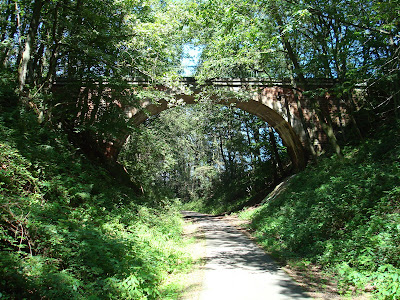 There's an interesting sign that I run by on this trail. It translates to Stork Meadow. 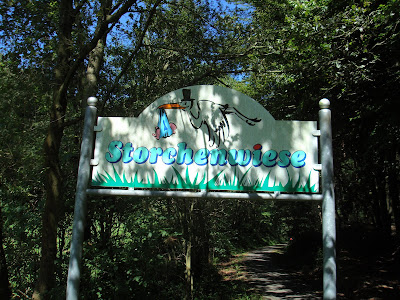 I always just ran by it but on this walk, with Sandy, we stopped to see what it meant. Out in the Stork Meadow are rows of trees. Each tree has a plaque, with the name and birth date of some local kid. Kind of a cool thing to do. A tree planted to commemorate the birth of your child. Some place they can walk to and see some day. They're own personal tree. 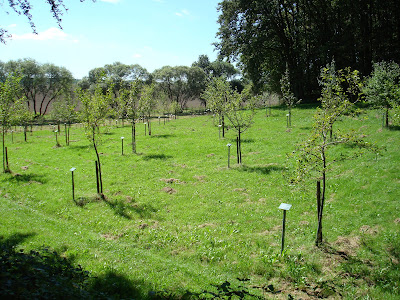 One of my favorite things to think about when I'm running across and over these fields and hills is that this is the very same land that Caesar's Legions marched and the barbarian Huns roamed. The same land that Charlemagne ruled and divided among his sons to begin the shaping of Europe. The same land that the black plague devastated, that Napoleon's Grande Armée conquered and later retreated. The very same Rhineland that Hitler's troops marched into while the world watched and backed down, and the same land Patton's 3rd Army tanks advanced across. The land below where fighter pilots and bomber pilots ruled the skies. To me, those are pretty awesome and inspiring thoughts and, the next thing you know, the run is over.

That's it for this run. Gotta keep it up to fight off the schnitzel and beer bulge.
Posted by Sandy and Jeff at Friday, September 10, 2010