I had a wonderful time in London. Our daughter Megan flew over and met me there for three days of fun and a quick family visit, actually my cousin Mandy's 40th birthday party. We had a great time!! Went to Hampton Court a Henry VIII palace, did a pub walking tour and lots, lots more. No pictures right now, Megan will be sending them to me. More London stuff later.

One of the nice things about this little adventure of ours in Germany is that we still have our travel privileges with American Airlines so we can buy cheap passes on other airlines. So I had flown British Airways into Heathrow and then back again to Frankfurt.

Jeff picked me up on Sunday morning at about 1100 and said he hoped I had some festing clothes to change into since we had to go to Bad Durkheim to check out the Wurstmartk. We've been there 20 times or more in the past but we have a large group of friends flying in, in just a few days, for the Wurstmarkt and then on to Oktoberfest. So Jeff thought we better make sure that the Wurstmarkt, the world's largest wine fest, still kicks ass. Like there was ever any danger that it wouldn't. Actually, it was just Jeff's excuse to go there and have fun.

I'd like to report that the 594th Wurstmarkt still kicks ass!! Jeff says we're good to go when our friends arrive for Friday and Saturday at this most wonderful of wine fests. Of course, there will be a report to follow. As documentation, here we are, having festival fun. It's very contagious. 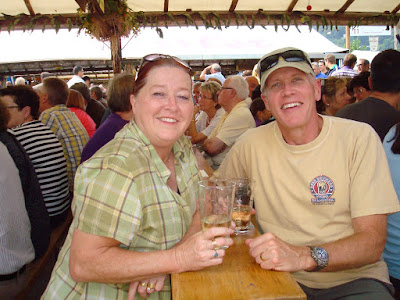 Check out those half liter wine glasses. I have to admit, it was a good tune up.
Posted by Sandy and Jeff at Monday, September 13, 2010