The fest of the week was one of the very best in Germany, Bernkastel-Kues on the Mosel. It's about an hour drive from our house. The weather was perfect! The crowds were just fine. We got there at 2PM, parked and hit the fest.

The Bernkastel wine fest is a little different because they have the festival divided into two locations, separated by the Mosel River. On the north side, right along the river is the arcade with all the carnival rides and craft vendors. Across the bridge and in the old town of Bernkastel are the vintners, food merchants and the bandstands.

Now, we've already established that Germans love schnitzel and beer, and walking and dogs. Well, there's something they love equally as well, bands. They love a big drum and bugle corps. They love marching bands. They love a high school jazz band. They seem to love them all.

Most every little village has their own band; a band that performs at their local functions and at the gatherings of other towns too. These aren't the local high school band. No, these bands are proudly manned by a multi-generation of very fine musicians. It is a proud moment for most young people to be asked to join their towns local band. In any one of these bands that were performing at the Bernkastle wine fest, and festivals across Germany, you'll see musicians ranging in age from late teens into their sixties.

So in addition to some of the pictures of the Bernkastel wine fest there's a few videos here to show you some of the performing bands that we saw.

Here's the street in Bernkastel that runs along the south side of the Mosel. Most of the vintners are located here during the festival. We had some great Rieslings and Silvaners. 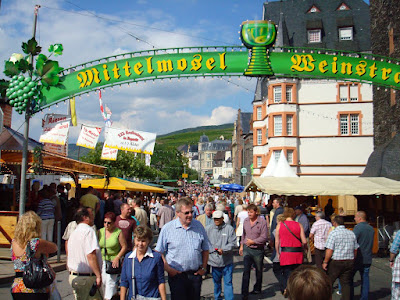 Bernkastel is an incredibly beautiful town. The streets seems to be right of the medieval times. 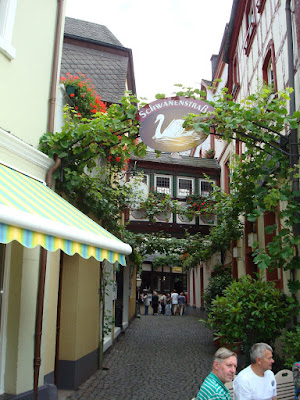 The main square in the town had a large band stand built for the festival and was a major gathering place for people looking to heighten their festival experience. Here I am with the town square behind me. 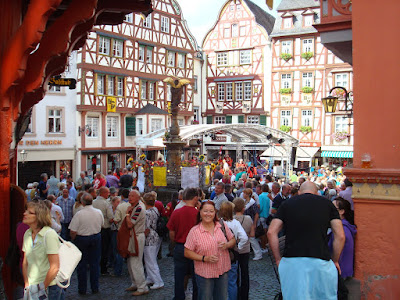 Have we mentioned that they grill a lot of pork at one of these festivals. The schinken (ham) sandwich was kickass. 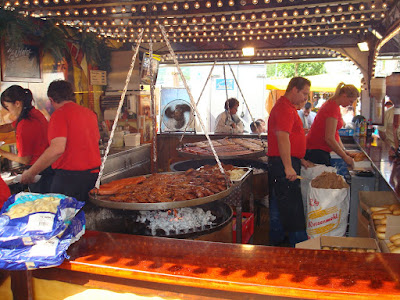 Like I mentioned, it was a perfect day and Bernkastel is the perfect place for a wine festival. It's got the quiet, beautiful Mosel with the steep vineyards on either side and just to top it off a picturesque castle ruin. 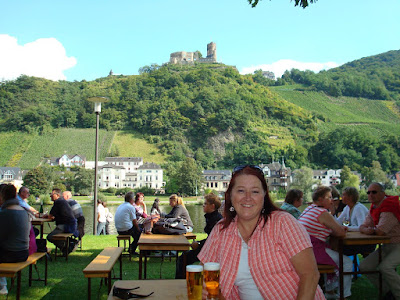 OK, here's a few videos that will show you the kind of bands we saw. They're all short so shouldn't take up too much of your time. Also, there's two quick videos that sort of encapsulate what a wine fest can be like.

This is the one of the first bands we saw. Hey, look at me, I'm in the band.

This second video isn't all that great but take a look at the instruments these musicians are playing. Looks like something Dr. Seuss thought up. Flugal Horns and all kinds of other weird things.

Every band there got to play here on the main stage in the town square. This was a particularly big band. Jeff panned the camera in an attempt at some artistic creativity.

Oh yeah, Germans like this kind of band too.

I thought I'd show you the two extremes of a typical wine fest. Here's a passenger tour boat quietly passing the Bernkastel wine fest.

Here's a biker gang. Not that kind. A bicycle club enjoying one of the beer stands. Hey, look at me, I'm with the drunks.

Bernkastel has one of the best fire works displays you'll ever see. We didn't stay to watch, having seen it before. They shoot fireworks from the castel ruin and a barge in the river which kind of creates the two forces of a medieval battle.