You've probably been wondering if we have a pizza delivery service here in Germany. Well, yes we do. There a few of them around but the biggest one, Pizza Attack, is in Kaiserslautern. They're located about nine miles from us, a 15 minute drive, well inside the city. In spite of that, they will deliver to us here in Weilerbach and we've seen their cars running back and forth through our town. 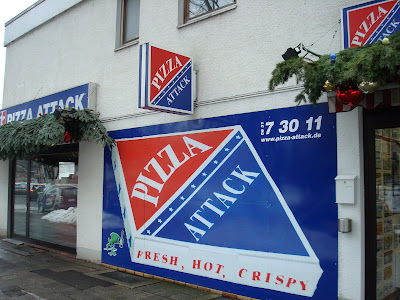 Pizza Attack has kind of an interesting operation. All their cars are those little Smart cars. None of this you-drive-own-car-and-put-our-sign-on-top like you see in the states. They own their fleet of cars. If you look closely at the picture of their cars, which shows just a part of their fleet, you'll see a little American flag on the antennae. I think that would indicate that the greatest percentage of their customers are Americans. But, maybe not, Kaiserslautern is a good size city and Germans like pizza too. Besides pizza, Pizza Attack also offers wings, ribs, pasta, salad, ice cream and soda. (NO BEER!! What kind of German business is this?) 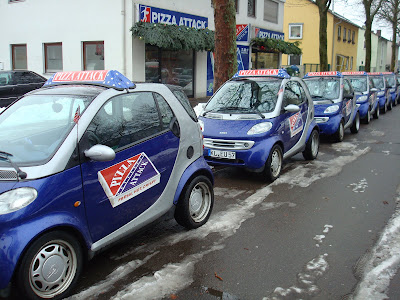