During our drive home from Berlin we noticed a very large monument high on a ridge a few miles north of the A-4 autobahn, just past the city of Weimar. That was quickly followed by a small sign on the autobahn that mentioned something about Buchenwald. Jeff turned the GPS on to nearby points of interest and there it was, Buchenwald Concentration Camp Memorial. We selected that as our new destination and followed the GPS to Buchenwald. 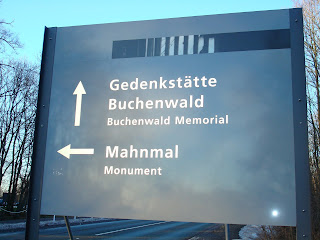 The road up the Etterberg, a large hill overlooking the plains of the German state of Thüringen, to the memorial is named Blutstraße, Blood Road. Buchenwald sits just over the crest of the hill on the north face of the Etterberg. The concentration camp was established in July 1937 to house various types of prisoners from all over Europe; Jews, Soviet prisoners of war, gypsies, political dissidents, homosexuals, Poles, Slovaks, Jehovah Witnesses, common criminals and a few hundred western POW's including American airman. The camp continued its brutal operation until its liberation by US troops on 11 April 1945. It was the first concentration camp encountered by American forces and radio reports, photos and movie reels of their findings shocked the world.

Entry to the memorial camp is free. Jeff and I paid the 3 Euros for an audio tour. Once we walked through the front gate, two things were striking about the location of the camp based on its high vista on the Etterberg. First, because of the height of the camp, without a doubt, on clear days, the camp inmates could certainly see well beyond the barbwire to the flat lands below, a bitter realization of their cruel circumstances. Second, even though the day we were there was a relatively warm winter afternoon, 48 F, the wind, high on the hill, was chillingly cold and we could easily imagine how unkind that wind had been for the camp inmates.

This is the front gate to the camp. We're standing on a road leading into the camp that became known as Caracho Path. It's the path new arrivals used on their way from the railway yard into the camp. It's the path that slave labor work details took to and from the quarry and local armament factories. When on the Caracho Path inmates were ruthlessly rushed and cursed and sometimes died. You can see the windows to the left of the gate are all covered. These rooms were the camp bunker cells. 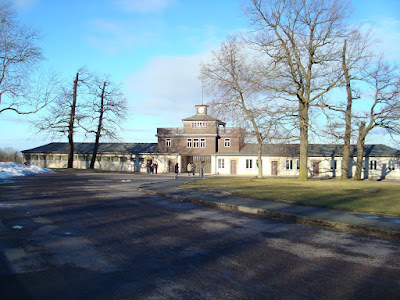 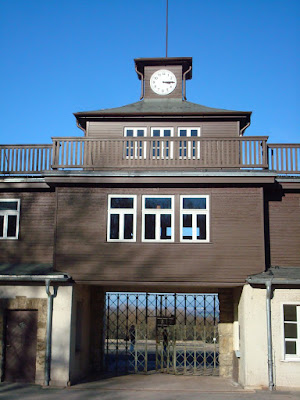 The greeting on the main gate, "To Each His Own." However, a more literal interpretion is "Everyone Gets What He Deserves." 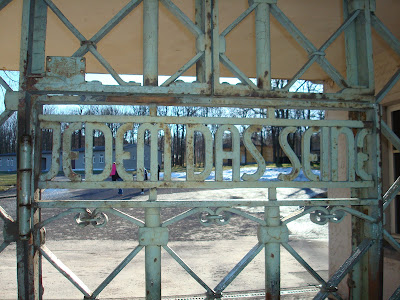 The bunker hallway. Small 4'x 6' cells. Camp rules said the maximum period an inmate could be held in the bunker was 21 days but it was not uncommon for a person to spend months alone in one of these isolation cells. The first cell on the left was for inmates that were to be executed the next day. 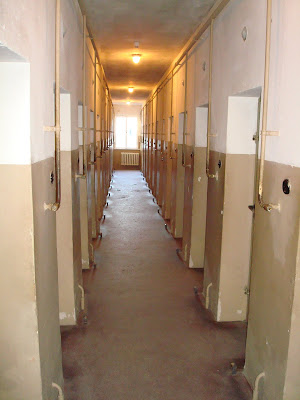 One of 23 guard towers that surrounded the camp. The electric, barbed wire fence was charged to 300 volts. On the right side of this photo, outside the fence, you can see a gray, rock formation. This was the bear pit, part of the camp zoo. The commandant had the zoo built for the amusement of his wife and children. There were four bears in the pit that could be seen by the inmates. Interestingly, the wife of the commandant was a sadistic brute in her own right which would eventually result in her sentence of life in prison following the war. 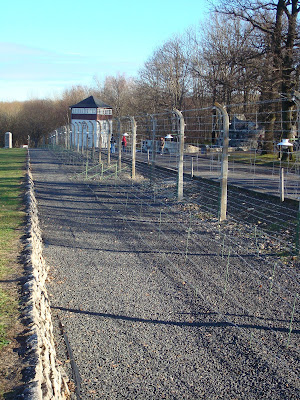 This photo was taken just inside the front gate at the very top of the camp. The camp terrain sloped downward to the north. Far in the distance you can see the plains and now, the modern wind generators so common in Germany. 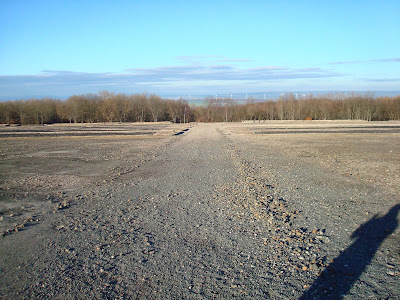 The camp crematorium. It's estimated that over 55,000 inmates were killed during the eight years of Buchenwald's operation. The crematorium became necessary when the SS couldn't keep up with the removal of human remains. Buchenwald was not an extermination camp like Auschwitz or Treblinka. It was a slave labor camp but the unspeakable cruelty of the SS resulted in mass death from malnutrition, exhaustion and punishment. 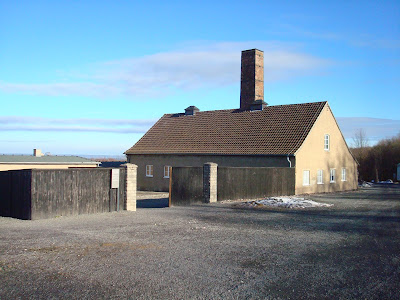 When execution was warranted, in the minds of the SS guards, one technique was to bring an inmate in for a medical exam. The inmate would walk into what appeared to be a medical office in the basement of the crematorium and be told their height and weight were needed. They were me asked to back up to this height measuring station. The groove that allowed the measuring device to slide up and down contained a slot that opened to a small room on the other side of the wall. In that room an SS guard waited for the inmate to back up to the wall to have his height measured. Once the inmate was in place the guard place a pistol into the slot and shot the inmate in the back of the head. This elaborate ruse was intended to give the murdering guard peace of mind by not having to look an inmate in the eye before killing them. 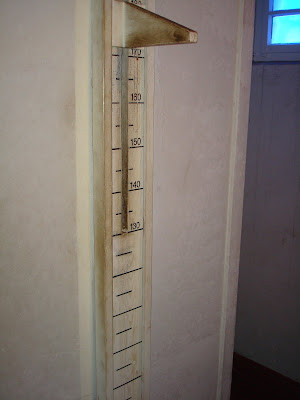 The ovens of Buchenwald. These ovens were built by Topf & Söhne (Sons) an company that manufactured furnace and maulting equipment. Their chief engineer would eventually die in a Russion gulag. After the war, the company was nationalized by the East German government and continued operation until 1996. 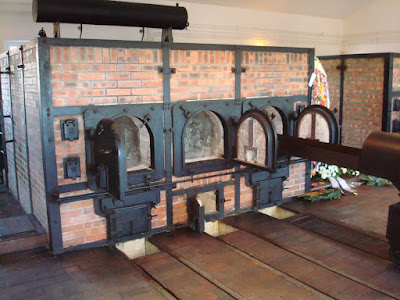 These two buildings are at the bottom of the camp. The large building is the camp depot, where inmate belongings were stored, sorted and, if reuseable, prepared for shipment. The small building is the delousing station where inmates were dipped into a tank containing a very caustic delousing liquid. 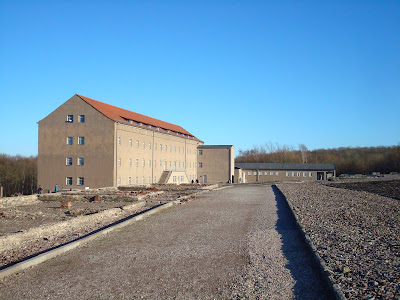 This photo is looking from the depot and delousing buildings back up the hill to the main gate. You can easily see how steep the terrain was in the camp. Just inside the main gate was a large mustering area where inmates would have to stand motionless and silent for long, drawn out roll calls. You can imagine that the sloping terrain made these sessions even more painful. 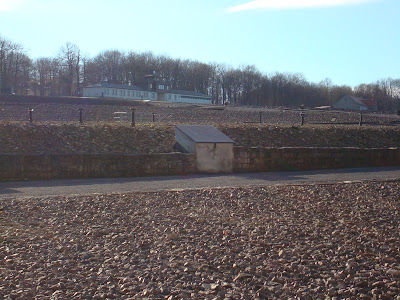 This is the Buchenwald monument that we could see four miles from the autobahn. It was built by the East German government in the late 1950's. This is a very large complex which incorporates three mass grave sights. 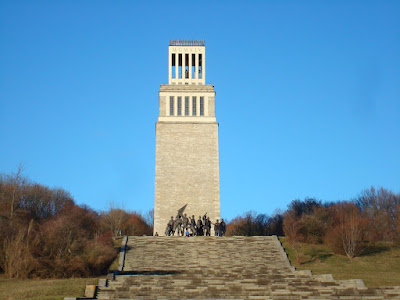 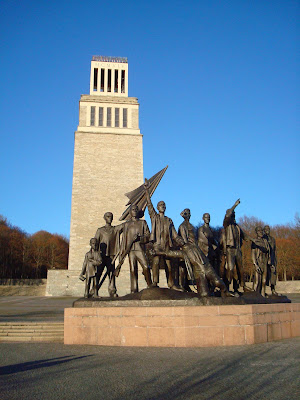 A view from behind the statue that shows just how high above the German plains the monument and the camp sits. 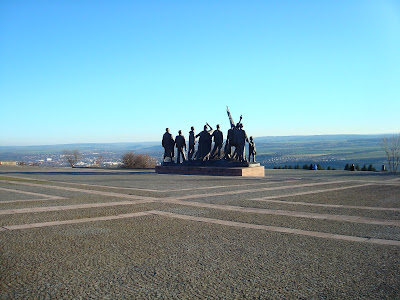 Buchenwald did not end it's infamous service at the end of the war. Once Soviet forces took control of the area they used the camp until 1950 to imprison as many as 25,000 former Nazis and enemies of Stalinist Russia. Over 7000 inmates died during this time and are buried in a mass grave adjacent to the camp.

Jeff and I had been to the Dachau Concentration Camp Memorial a number of times in the past. That camp was built very near a good size town and just outside Munich. Because of it's remoteness and exposure to the winds and cold of the Etterberg, Buchenwald just seemed more brutal and more forbidding.

Well, we started our drive home. Lots to think about, lots to talk about, a very emotional and thought provoking afternoon but one we were glad we had an opportunity to experience.