Last week, before New Years, Jeff and I had some free time together (I started my new job at Landstuhl Regional Medical Center on 20 December) and looked around for somewhere to go for a quick overnight trip. Jeff had received "The BEER Book" for Christmas from his son Ryan. It’s really a good book and includes write-ups about a few cities that have unique beer opportunities. One of those cities is Bamberg, Germany which happens to be just three hours from our home in Weilerbach. So we took off for Bamberg.

Bamberg is a city in northern Bavarian about 30 miles north of Nuremberg. Having never been bombed during World War II, the city remained undamaged and so most of its old houses, churches and businesses remain intact. Some of those businesses are the city breweries. Although Bamberg has a population of just 70,000, amazingly, it has nine breweries. Eight of those breweries are centuries old establishments, one a modern microbrewery. The article in "The BEER Book" had a preplanned walking tour, with map, that takes you to a number of the gasthauses owned by the various breweries, in addition to some of the sightseeing highlights of the city. We arrived in Bamberg at noon, checked into our hotel headed to stop #1.

Before I get into our gasthaus visits, Bamberg really is a pretty town and we did a bit of sightseeing. Their altstadt (old city) is full of half-timbered buildings hovering over narrow winding streets. But, as I said, we were there mainly for the beer. That reminds me, a bit of Bamberg trivia; it's the home of the world's oldest brewery machine factory.

Stop 1: Brauerei-Gaststätte Klosterbräu. The oldest brewery in Bamberg beginning in 1553. Their gasthaus is in a huge old building that's divided by an alleyway so that when you walk through the front door you step into the alley with a bierstube (beer room) to the left and another to the right. We went right which was a cozy, dark wood, room. Very friendly folks, we sat at a table with two local patrons and had an excellent Bockbier, dark in color but light in taste.

Brauerei-Gaststätte (Brewery-Restaurant) Klosterbräu, just like it says. Quite an impressive building. When we walked in that main door we stepped into the covered alleyway which lead to a open courtyard. But, just inside the entrance was a door to the left and one to the right where the gasthaus rooms were for eating and drinking. Their Bockbier was excellent. It was very dark brown and the foamy head was brown too. 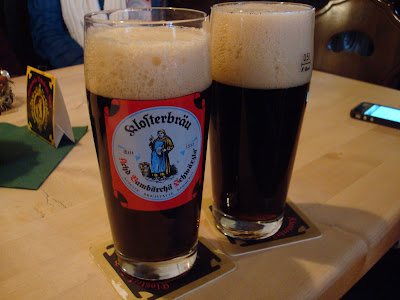 Next, after a stop at the Altes Rathaus (old city hall), to fill the sightseeing square, we walked through the city's main shopping street, Grüner Markt (green market), very nice, to get to Stop 2: Brauerei Fässla. Again, the Fässla gasthaus had an alley way that separated the establishment with rooms to left and right. Fässla began operation in 1649 and, again, a very nice, cozy place with even more and darker wood. Interestingly, in all the places we've ever been in Germany, none of them advertise a lager as one of the available beers. If you want a light colored beer it's always a Pils, Helles, Export or something like that. Well, Fässla had a lager and we tried that. As expected, very good, light in color but darker than the Pils the folks next to us were drinking.

Before I go on to more beer, here's our big sightseeing event, the Altes Rathaus. It's built on a small island in the Regnitz River. Very impressive. 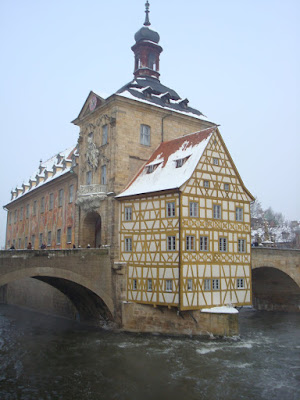 Here's the passage way through through the Altes Rathaus which leads out of the old town. 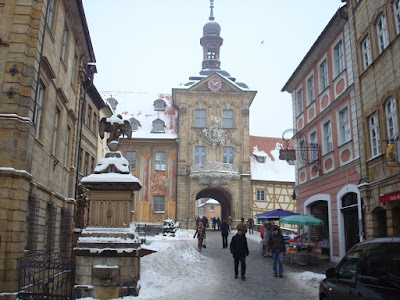 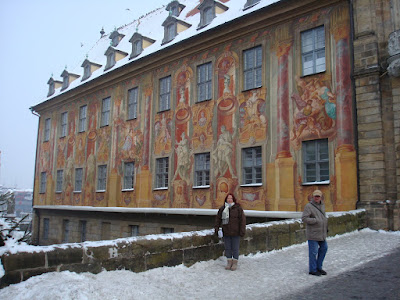 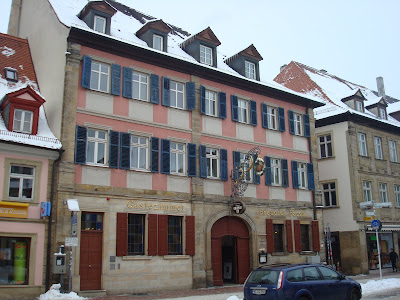 We liked the Fässla brewery symbol, a dwarf rolling a beer barrel. 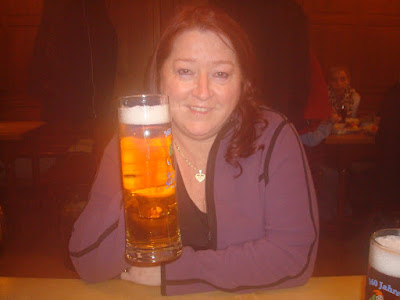 Stop 3: Brauerei Spezial was right across the street from our second stop. The Spezial gasthaus had a really, really dark wood interior, the dividing alley and long community tables which made the experience here lots of fun. Spezial began brewing in 1536 and here is where we had our first Rauchbier (smoke beer) which is one of the things that made Bamberg famous. We've had Rauchbiers before and the Spezial version was very good and surprisingly light. This Rauchbier was a very dark copper color with just a slight, smoky taste.

Brauerei Spezial, almost directly across the street from Fässla. 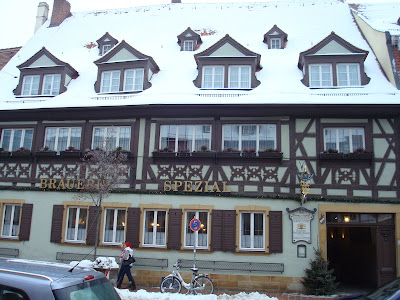 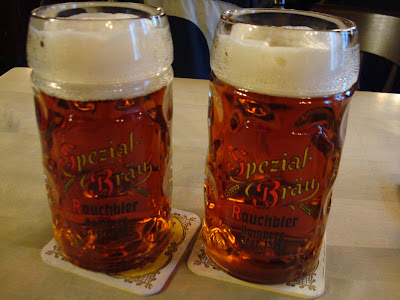 Back to the altstadt for Stop 4: Ambräusianum, the newest beer maker in Bamberg, a brew pub that started in 2004. They serve a nice unfiltered beer so it's cloudy with floating yeast. Very fresh and very good. This place was like a stairway atrium, which made us think they built it in the alleyway that we'd found in the other three places.

Ambräusianum, the newest brewery in Bamberg. 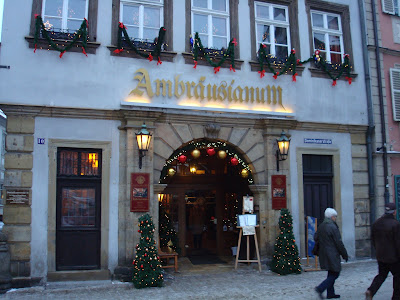 We learned that unfiltered beers don't have a significant head because of the floating yeast but it tasted good and fresh. Stop 5: Brauerei Heller-Trum. This is the place that we were most anxious to visit because they make the most famous smoke beer in Germany, Aecht Schlenkerla Rauchbier. The brewery started operation in 1678 but there's been a gasthaus in the building since 1405. Same deal when we walked in, covered alleyway seperated the establishment with big rooms to the left and right. In this alleyway, not heated just like all the others, smokers were sitting all bundled up since it's not allowed indoors in Bavaria. Again, very dark wood trimming and a marvelous vaulted ceiling. A hubbub of activity, all tables occupied or reserved. We ended up sitting with a German couple that had room, very nice people. The food was great! The Rauchbier was most excellent.

Here's what we came for, Brauerei Heller-Trum, Schlenkerla. 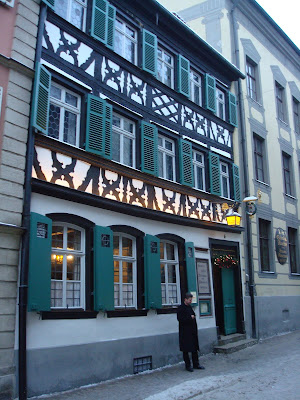 A beer coaster well worth keeping. Black as black can be but look at the thick, white head it produces. A very heavy smoke taste. Quite unique and well worth the trip. 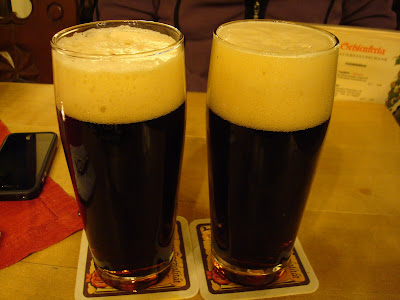 After Schlenkerla we were tired and full so we walked back to our hotel, the Barockhotel am Dom, just below the Bamberg Cathedral. That's an interesting story itself. A lot of the reviews for this hotel said it was hard to find, even the GPS didn't help. Well, that's because to get to the hotel by car you have to drive into and along a no vehicle allowed walking zone. But that's where the hotel is and where their free parking area is too. So between the GPS, our map and Jeff we had no problem.

I'm here goofing around with the owner of the Barockhotel before we started our drive home. 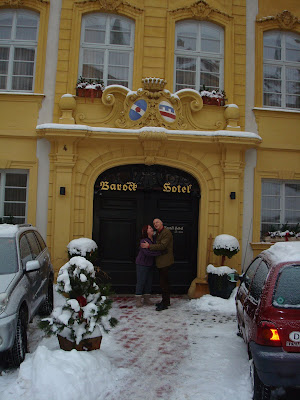 We really enjoyed Bamberg and our hotel. You may have noticed I described just about all of the gasthauses as cozy. That might be because the outside temperatures were around 10 during the day and zero, both fahrenheit, in the evening. A phone booth could almost be cozy when it's that cold. So we plan to visit Bamberg again in the spring or summer when we can do some more "sightseeing" and visit some of the other gasthauses we missed.

RAUCHBIER is yummy!!
Posted by Sandy and Jeff at Tuesday, January 04, 2011