Jeff and I went up to Spangdahlem Air Base, about an hour north of us, to spend an enjoyable Friday night with the 81st Fighter Squadron, the only A-10 squadron remaining in Europe. We stayed the night in a very nice suite in base billeting. After a nice sleep in Saturday we got up and drove over to Bitburg.

My dad was stationed at Spangdahlem in the 60's but, because of the proximity of the two bases, we got base housing at Bitburg. Here's Bitburg Air Base stairwell housing. This is where I lived with my dad, mom and sister. Building 33, apartment E4. It's a ghost town now for the most part. Only support facilities have been open at Bitburg for the last 16 years or so. The jets are long gone and the entire complex is planned to be closed in the next 4-5 years. 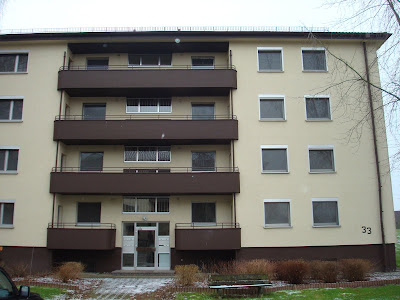 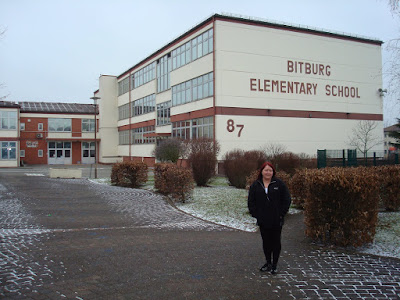 OK, as Jeff said, let's get out of the past and into the present. You might want to grab a beer for the rest of this blog because that's what it's about. Wow, big surprise. In fact, if you can grab a Bitburger you'll appreciate this even more.

We had planned on going to the Bitburger souvenir store when we discovered they have a whole new complex in Bitburg. It's located on the grounds of their old brewery. They moved their present brewing operations out to the edge of town in the early 80's. When we parked the car at this new showroom facility in town we looked up at this large window only to see this image beckoning to us. Once we got inside we learned they were going to have an English tour of the place at 1PM. We had an hour to kill. 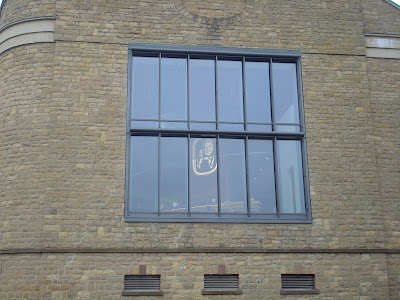 The solution to that was easy. Walk across the street to the Eifelbrau, a hotel and gasthaus. Guess what beer they served? You got that right, Bitburger Premium Pils. 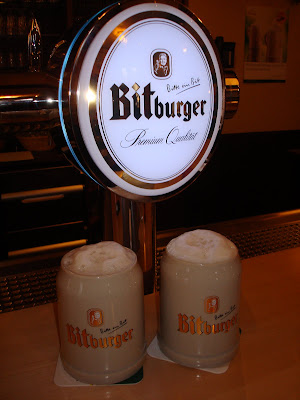 Some group showed up after us and ordered a bunch of Bitburgers. These are little .3 liter glasses. It takes seven minutes to pour a pils properly. No tilting the glass and pouring on the side. You gotta pour it straight in to the build a head and release the fragrance and tastes of the beer. These beers are after the initial pour awaiting a little settling. 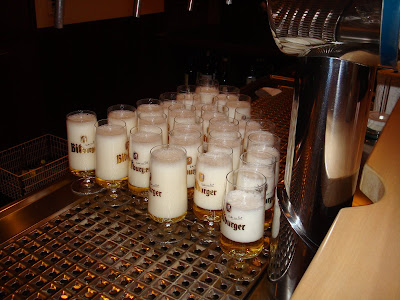 A nice video of the second pour.

The finished product waiting for delivery. 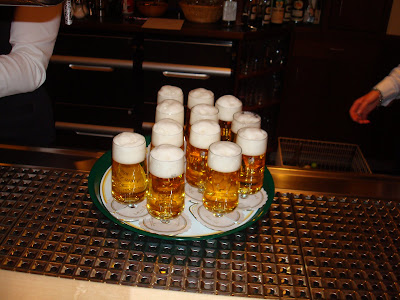 The tour through the old grounds of the Bitburger brewery was great! Very thorough, concise, easily understood and the best part, at the end, free beer.

Bitburger beer was first brewed in 1817. It is now owned and operated by the family's seventh generation. Originally, the beer was a top fermented beer, an ale, because of the known technology. However, once refrigeration became available, Bitburger changed to a bottom fermentation process, a lager beer, which the brewery still makes today. The Bitburger brewery was completely destroyed during World War II but was rebuilt. Their much recognized logo of "Bitte ein Bit" means "A Bit please." They had another phrase that was commonly on their bottles into the 1970's, "Abends Bit, morgens fit," "Bit in the evening, fit in the morning." Supposedly, it implied that a Bitburger was a good remedy for a hangover in the morning. Today, Bitburger is the third largest producer of beer in Germany behind Oettinger and Krombacher.

After a history of the Bitburger brewery the first stop on the tour was an explanation of the water the brewery uses. Bitburg owns five of its own wells. They add nothing to the water they use in their brewery process. 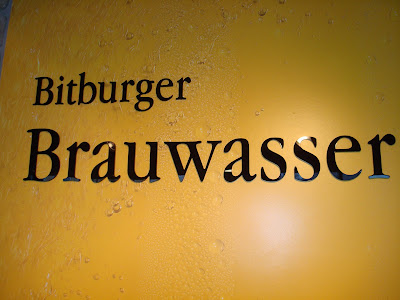 Bitburg uses only two row barley for the malt used to make Bitburger. The sugars that result from the malt in the brewing process feed the yeast that's introduced later. 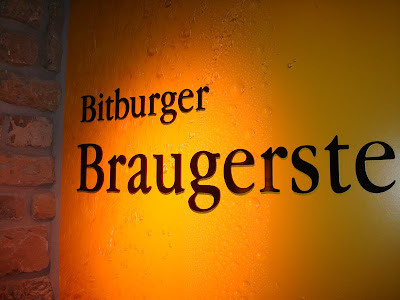 Hops adds a natural preservative and the level of bitter flavor to a beer. Brewers use only the female flower of the hops plants and among hops farmers the joke is that a hops field should be like a convent. Unfertilized and female. 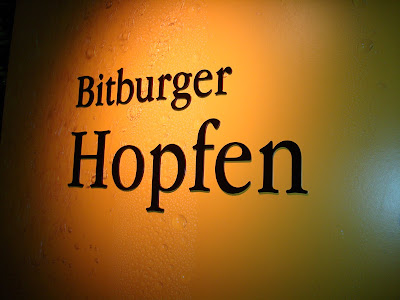 As mentioned, yeast feeds on the sugars that the malt produces during this whole process. A yeast cell then produces two waste products that are highly desired; alcohol and carbon dioxide, the kick and the fizz. Yeast isn't actually mentioned in the original Germany beer purity law because back then, people didn't know about yeast and what it's part was in the brewing process. 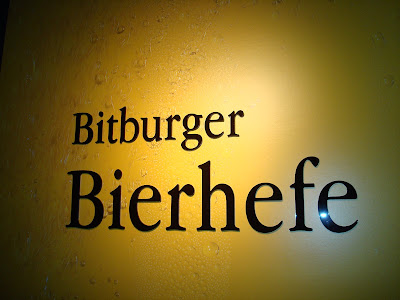 There was a lot more to the tour, the whole brewing process plus bottling and kegging the beer. It was a really good tour. Once it was over though, this is where we ended up. The same image that beckoned to us from the parking lot. 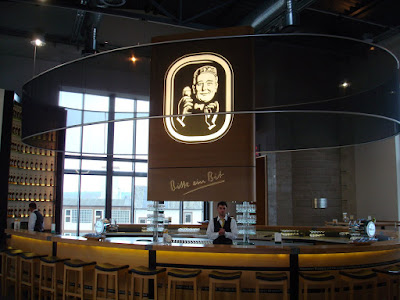 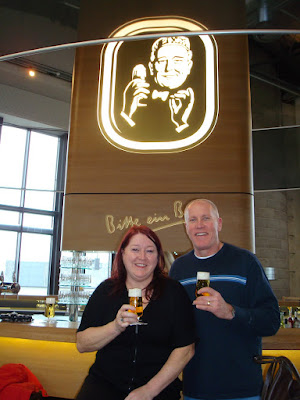 Here's the original and the latest image that appears on every Bitburger. Contrary to what some think, it's not a picture of any one specific person. A lotta folks think it's an image of Theobald Simon, the third generation leader of the company, who took over operations of the brewery at 29 years old in 1876. It's not, and that's official. Straight from the Bitburger tour guide. 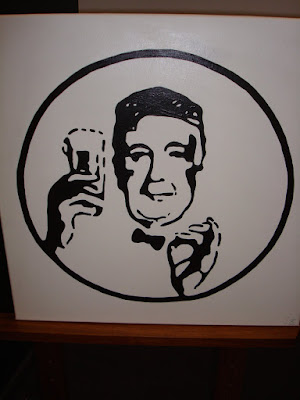 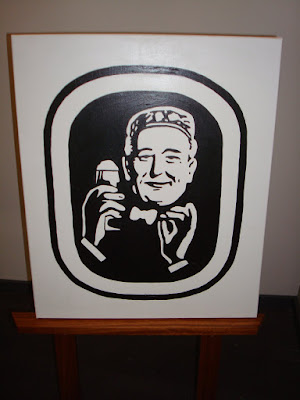 The exterior of the post-World War II Bitburger brewery. It now houses the brewery museum tour and is attached to the city's performing arts hall. 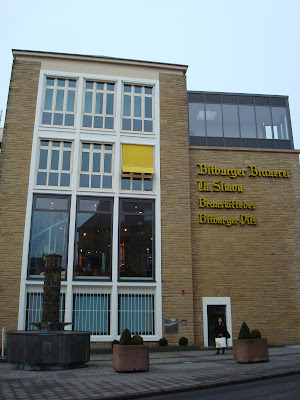 The gausthaus that Theobald Simon established in the late 1800's right next to the brewery, the Simonbrau. Still owned by the Bitburger brewery today. 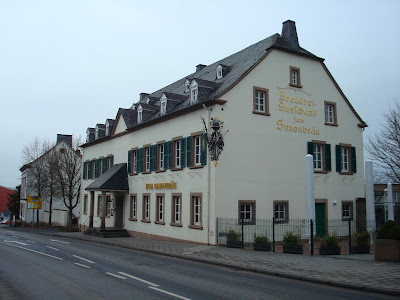 At the Simonbrau after the tour. Hey, they serve Bitburger. Another great day in Germany. 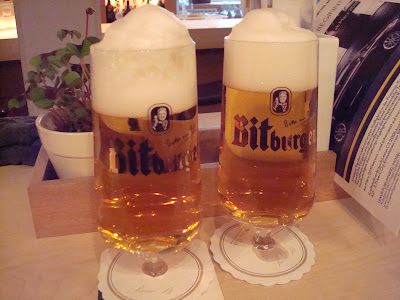