We've had a pretty leisurely weekend. Friday night we went to the Officers Club at Ramstein. It's hard to imagine what a wonderfully fun place it used to be there before they remodeled it and the fighter pilots left. (Ramstein is a C-130 base now.) They do have a pretty good turn out on the first Friday of the month, although all the rest are pretty weak, but when we walked in at 1730 (530PM), there was at least a hundred folks there, Jeff was the only flight suit. By a quarter after six there was just a handful of people remaining. Had some great fun though with some new friends, the USAFE JAG (a judge/lawyer who used to be a nurse), some other retired military people and our Weilerbach neighbors Sigi and Bridgette. 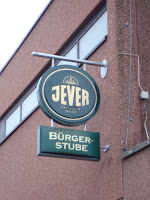 We left around eight and went with Sigi and Bridgette to the Bürgerstube in Mackenbach, the next village over from our Weilerbach home. The Bürgerstube is a gasthaus located in the town hall of Mackenbach. That's a very common practice in Germany, even in the big cities. The Rathaus (city hall) in many Germany towns contains a quality gasthaus. We had a great meal and wonderful conversation. Sigi and Bridgette are in their early seventies and have quite intriguing stories about Germany before, during and after World War II. Bridgette comes from a town in far eastern Germany, now in Poland. At the end of the war, her family had lived on the same property for over 200 years. She can remember when the Russians showed up at their doorstep and told her parents they had ten minutes to get out of their house, never to return. Her father quickly hooked his two horses to their wagon and threw in the things her mother, sisters and brother had gathered and they started west. A week later Russian soldiers took their horses and now they had only what they could carry. Eventually they ended up in the Bonn area. Again, a great night of conversation!

Just a typical government building but the gasthaus inside was very special. Am ausgezeichnetesten!! (Most excellent.) 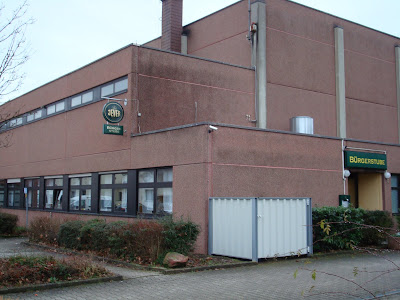 Saturday we had to do some shopping in Kaiserslautern. It was a beautiful day, 55 degrees and sunny. We quickly knocked out our shopping requirements and then stopped by a couple of beer establishments that were on our to-do list. The first, Hannenfass, is a favorite among locals and Americans. Had a nice Alt beer, dark beer but light taste. Then we walked to the Bierbrezl, a very quaint, little place stuck out of the way in K-Town. We really liked this place. Very friendly folks, good beer and a nice food menu. I think this is going to be one of our favorites. 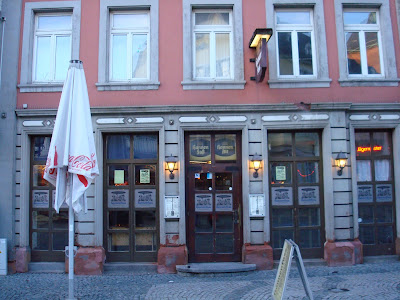 OK, Hassenfass is nothing special on the outside, but look at what we found on the inside. 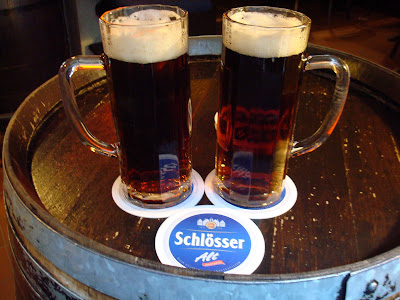 Sometimes you can just tell from the first look that you're going to like this place. Bierbrezl is one of those places. 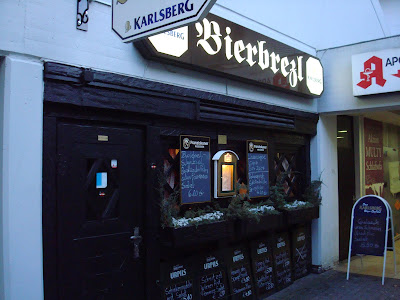 Karlsberg Urpils is one of the local beers here in the K-Town area. Notice the little paper skirts they put on the glasses to catch the condensation. 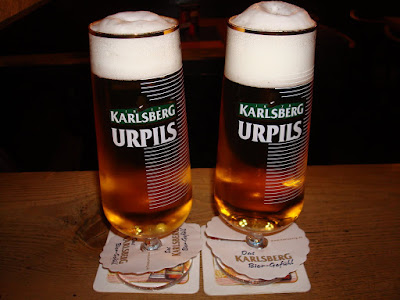 I don't think I've had a picture of Jeff on our blog in a while. Here he is, alive and well. 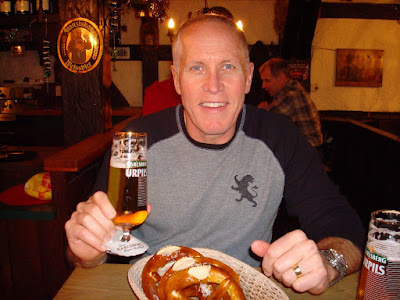 Sunday, just catching up on things around the house. Once it stopped raining we did a little drive around the area just to enjoy the German countryside. Also, did a little planning for our trip next weekend. We're really excited about that but you'll have to wait for that blog. Back to work for both of us Monday morning. Well, we gotta do something to support this German fix.
Posted by Sandy and Jeff at Sunday, January 09, 2011