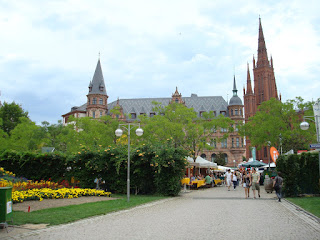 Last weekend, to complete our first big wine fest weekend since arriving here in Germany, we started Saturday at the Wittlich Pig Fest. Sunday we drove up to Wiesbaden to attend the last day of their ten day city wine festival. We were driving out of Weilerbach when we remembered our very own town here was having a small festival of their own, a beach party. The folks in Weilerbach had brought in a couple loads of sand and created a small beach in one of the local parking lots. They had a stage with live music, beer venders (Park), various food places and merchants with different sorts of things. So before leaving town we stopped at the Beach Party for, what else, a brat, beer and pommes. Made for a nice lunch before the hour drive to Wiesbaden.

Wiesbaden's wine fest is a little different than most because it runs ten continuous days in August and it's right in the center of a rather large German city. All the vintners, food merchants, three live music stages and sales booths of various wares are situated around the city Rathaus (town hall) and the city's, unique, large red brick cathedral. Happily, we found a Kloster Anechs beer vendor. So we had a couple beers, a zwiebelrostbraten (pork cutlet sandwich with onions), sampled some wine, listened to some music (all english, American songs) and called it a day.

Here's Jeff under the Andechs umbrella. It was 85 and sunny there so the shade was nice. 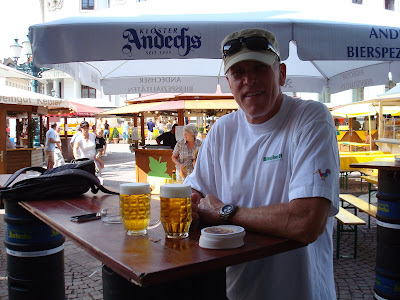 So our first leisurely weekend proved quite successful. Three fests; Wittlich, Weilerbach and Wiesbaden. All W's, all pronounced as V.

Oh yeah, we had this "pizza" thing too. Paper thin crust, long, thin slices of canadian bacon, gouda cheese and all these greens (they kinda looked like dandelion leaves). But, it was very tasty. 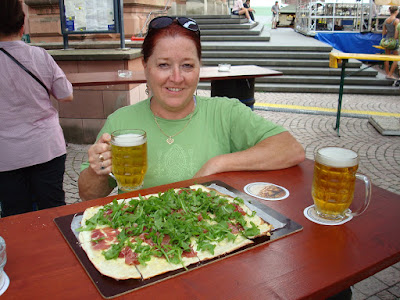 The public toilets at these festivals are always interesting. At Wiesbaden's fest they had these big, high speed toilets. Each facility, men and women, was closely guarded by a respective attendant. Now, just because it was the men's facility didn't mean it would have a man attendant, same for the women. This particular one had two guys running the two toilets. Here you can see the glare of the men's attendant. The going rate for use is 50 cents Euro. You don't have to pay it but you'd probably get some kind of toilet curse put on you by one of these attendants. 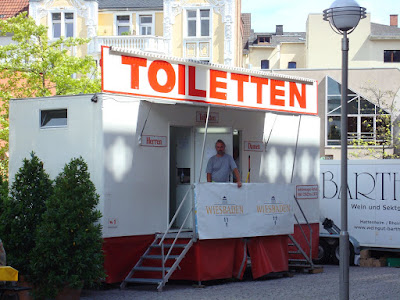 The red brick cathedral behind the Wiesbaden Rathaus. 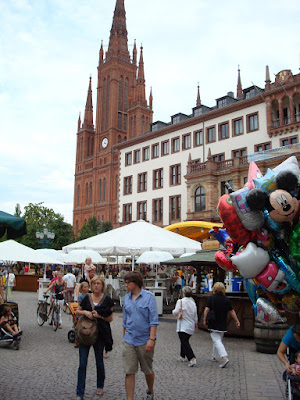