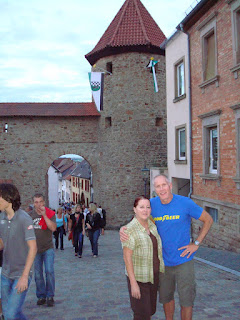 Our second weekend here, 7 August, we drove up to the town that we lived in from 87-91; Kirchheimbolanden. During those years Jeff and I were both active duty. I was stationed at the hospital in Wiesbaden and Jeff was at Ramstein then too, about 75 miles apart. We lived half way in between, which turned out to be Kirchheimbolanden. It was, and still is, a wonderful town. However, the reason we made the trip up there this day was because it was Kibo's wine fest weekend.

We had a great time with some friends that met us there. The city center of Kibo is built around the ancient medieval wall and towers; a beautiful setting for a wine fest. (The picture here is of Jeff and I at one of the wall gates.) We sampled the local wines, had a schnitzel sandwich to curb our appetite and then a bit later had the no-kidding big ass, full-up schnitzel plate.

It was a great night!! Weather was perfect. Crowds were quite manageable. Wine was great!! Food was awesome. The setting and the whole atmosphere was kickass (now Jeff has me saying it).

Here's Jeff's first taste of wine in Kibo in 19 years. Wearing a beer shirt at a wine fest? The man has no couth. 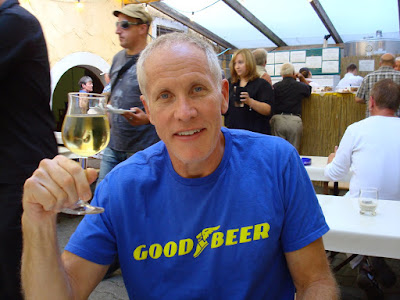 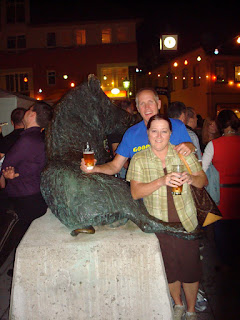 The coat of arms for Kirchhiembolanden has a wild boar proudly displayed and the wild boar is the symbol of the town. This statue of a wild boar, don't know the name of the thing, can be seen in many places around Europe. The original is in a museum in Florence; we've seen it. It's also on the shopping platz in Munich near the Marienplatz. And now, there's one in Kibo. A-10 pilots have to have their picture taken with anything resembling a warthog. This wild boar statue will do nicely.
Posted by Sandy and Jeff at Thursday, August 19, 2010