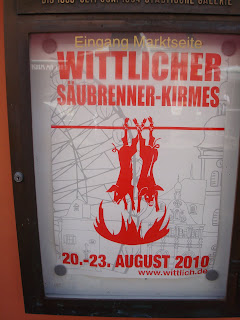 Yesterday we were at the Wittlich (W's pronounced as V) Pig Fest. Wittlich is a small city near Bitburg and Spangdahlem, all just north of Trier about an hour from our home. The story behind the Pig Fest is that during ancient times the city was threatened by a horde of Huns. They felt secure though behind their Roman walls. However, the night prior to the Huns arriving, the bolt that was to be placed in the lock of the city's main gate could not be found. So a soldier placed a turnip in its place. (There seems to be some dispute as to whether it was a turnip or carrot but the official city statement does say turnip.) Well, during the night a pig came along and ate the turnip leaving the gate unlocked and allowing the Huns to enter and sack the city. Once the Huns left, the people of Wittlich slaughtered all the pigs as punishment. Now today the city cooks up over a 100 large pigs for the annual Pig Festival.

Wittlich is in the Mosel region of Germany so there are plenty of excellent, white German wines to sample. And, as mentioned, not far away is Bitburg, home of the Bitburger brewery. So, pork of all sorts, wine and beer were the faire of the day.

Germans like their parades and Wittlich, of course, had a pig parade. We don't know if that's what they call it but that seems appropriate. Here's a picture of a horse drawn wagon that carries the first pigs to be put on the spit. Those look like turnips to us. 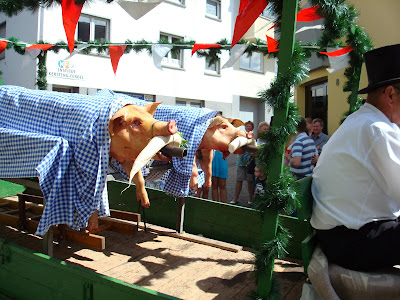 We're assuming that this must be the pig queen float. There were easily 50 or more pig princesses that didn't make queen but at least they still got to be in the parade. 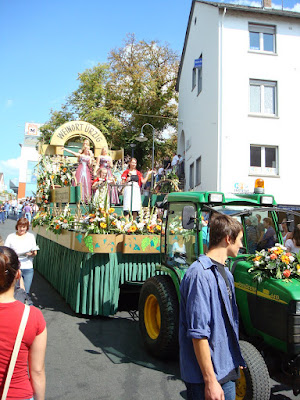 Of course, the theme through out the town was pigs. Here's some pig bread that one of the local bakers made up. 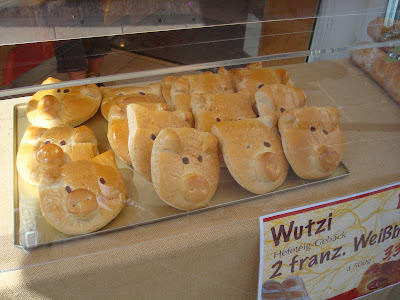 Once the parade got to the city's main square they loaded the pigs up on the spits. Here's a few pictures. 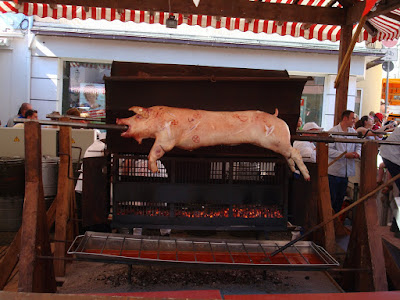 This was a two spit operation. 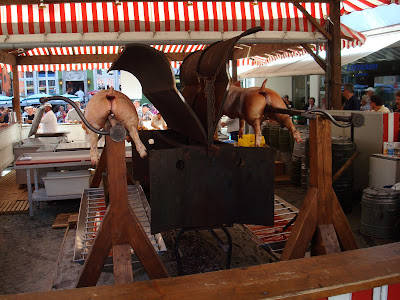 This guy had a great job, turning the pigs. 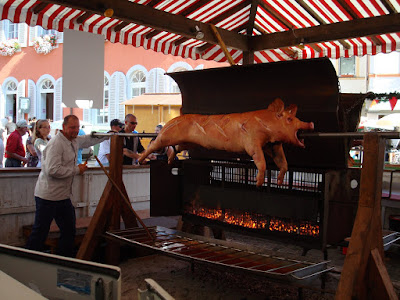 Of course, as they say, the proof is in the pork. Here's my first taste of Wittlich pork. With some Bitburger to wash it down. 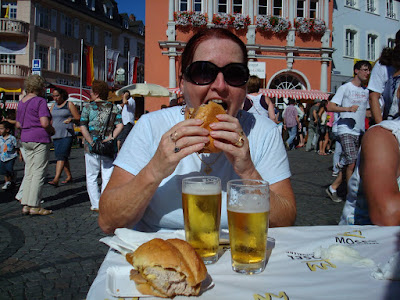 As I mentioned, Wittlich is in the Mosel region of Germany and so their local wines were a highlight of the fest. In spite of the pig theme, the actual coat of arms of the city is two keys. 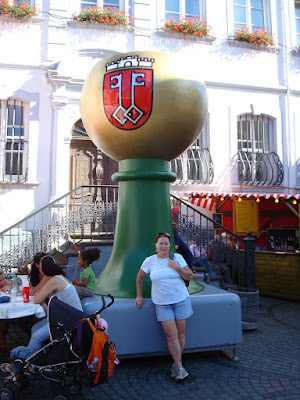 Not everyone likes pork. In fact, some people hate meat altogether. This is the first festival we've ever been to where a group showed up to protest the festivities. The German police wouldn't let them march through the fest. Just let them have their say and then they quietly moved on. 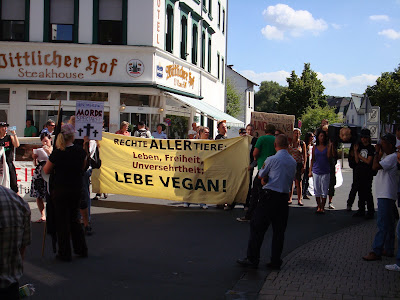 Above you'll see the protesters and recognize the Vegan; just like in the US, folks that are ultra-vegetarians. The big yellow sign says "All Animal Rights: Life, Freedom, Fairness; Live Vegan." The little sign on the left with the crosses says, "Murder Pageant." On the right you can see some people carrying a black coffin with a pigs head on it. Did I mention how good my pork sandwich was?

That was pretty much it for yesterday's adventure. Oh yes, we did see some mother washing her little 3-4 year old son in the city fountain. Had him down to totally buck naked. Sponging him off with his little willie (remember W's pronounced as V) flailing in the breeze.

We leave for the Wiesbaden wine fest in about an hour.
Posted by Sandy and Jeff at Saturday, August 21, 2010