We did the Worms (W's pronounced as V) Backfischfest last Saturday. The festival sits right on the western bank of the Rhine River. Worms is a very historic city about 45 minutes south of Frankfurt. Driving through the city is an amazing experience in itself seeing the ancient cathedrals, some that date back to the 12th century.

Here's what the festival's web site has to say about the fest. "In Worms . . .the all-year favourite is the Backfischfest, a funfair paying tribute to the fishermen’s guild, Germany’s oldest guild founded in 1106. The name Backfischfest is a pun, denoting both ‘festival of fried fish in batter’ and ‘festival of teenage girls’. Every year on the last Saturday in August, the Bojemääschter vun de Fischerwääd—as the ‘mayor of the fishermen’s is called in the vernacular, and his wife, seize the power in the City Hall, starting nine days of celebration of the largest wine and funfair on the Rhine."

In spite of a few rain showers it was a great day. Again, we sampled the local wines and really enjoyed a Silvaner of which we bought two bottles to bring home. Had some great conversations with some of the locals and a couple from Cologne. Had pork steak on a brotchen, pork steak on a stick and pork in a brat. We were porked out when we got home.

Now look at this display of various sausages. The center sign advertises Black Forest Ham (Schwatzwälder Schinken) and below that you can see sausage links displayed on top of slabs of pork. Meat on meat, that kicksass! 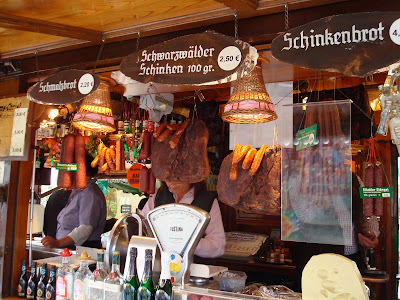 Speaking of pork, here's what a typical grill looks like at one of these festivals. That's pork in bratwurst, rindwurst, rostbraten etc. All that pork but we didn't see any of the Vegan protesters at this festival. 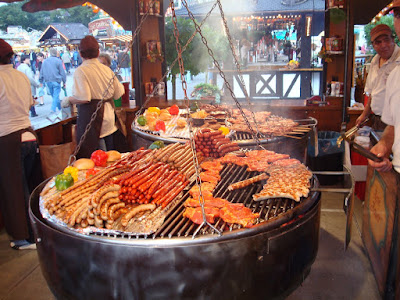 Here's a trash can at the fest. More pork. 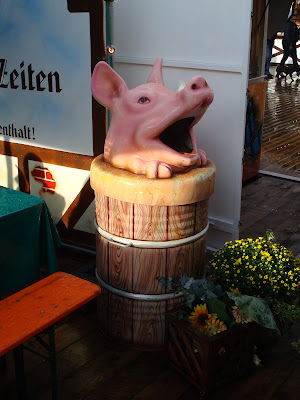 Some of you may say, "Oh big deal, we go to carnivals here too." Well, when was the last time that your local carnival had a medieval tower (with working clock) that now is used as a bridge footing for a highway crossing the Rhine River in the background. 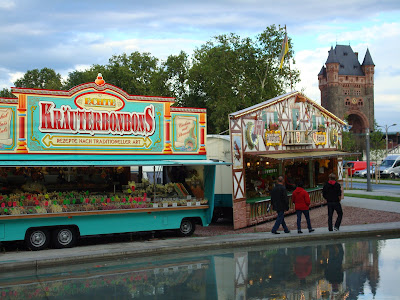 Here's a video we took of typical German festival music.

Seriously, Germans love this kind of American music. "West Virginia" and "Sweet Home Alabama" are two of their favorites to sing along with at festivals and have been for decades.

Here's one last video to entertain you. A German guy balancing a beer on his head. We were talking to a couple when this started. Jeff said to the lady, "Das ist er hat einen flachen Kopf einfach." (That is easy, he has a flat head.) She replied, "Ja denke ich, dass er auch einen leeren Kopf hat." (Yes, I think he also has an empty head.) Very funny!!