Last weekend we went to the Brezelfest (Pretzel festival) in Speyer. This is one festival that we’ve been anxious to go to but over the years we were always doing something else. This was the 101st Brezelfest.

Speyer is one of the oldest towns in Germany and is dominated by the cathedral that we’ve seen many times passing by on the autobahn going to or returning from Munich, Bavaria or some other destination in southern Germany.

It’s an hour drive from our home in Weilerbach to Speyer but today we’re going to train. We’re hopping on in Ramstein village, from there to Kaiserslautern where we change trains. 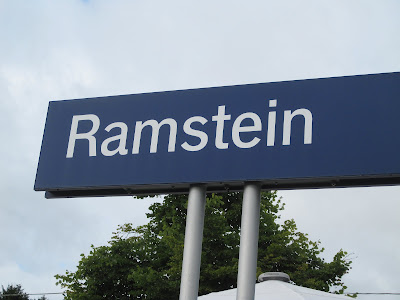 Here’s our train arriving in Ramstein. 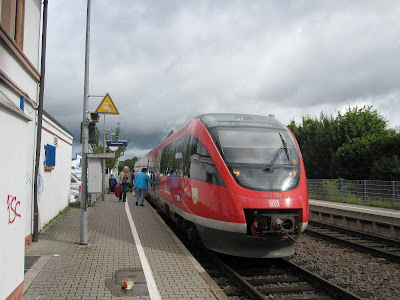 We were traveling with two other couples. Here’s me with Linda and Beth. 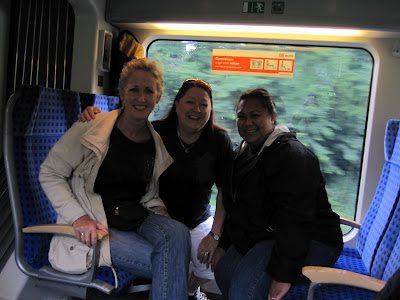 The guys with Jeff, Cassius and Harpo, are partaking in a train beer to prepare for the festival. 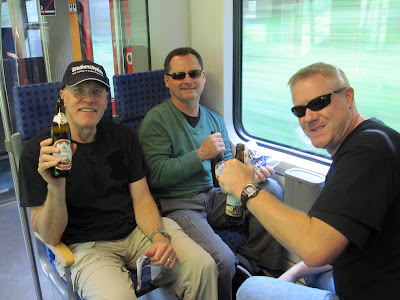 We’ve arrived in Speyer at 1130. The festival begins at 1400 so we can make the leisurely one mile walk to the festplatz (festival grounds). As we left the train station there's this statue across the street, a king holding aloft a frothy glass of beer. Our kind of town, and king. 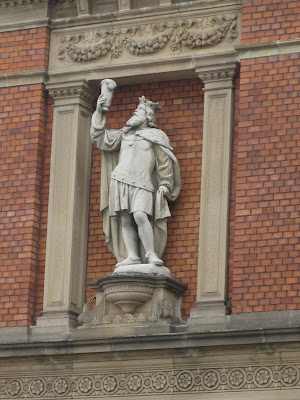 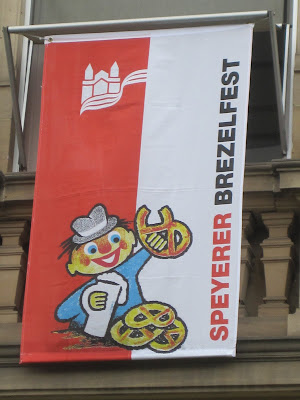 Jeff and I had never been to Speyer before and as I mentioned we intentionally arrived early so that we could take in some of the sights of the town. We’re on the Maximillianstraße which is the main shopping street in the city and a pedestrian zone. This is the Altpoertel (old gate). It is one of the largest and most important city gates in Germany. 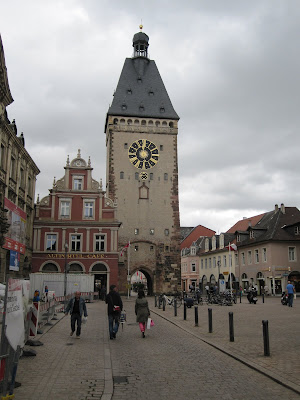 The twin spires of St. Josef church in Speyer. 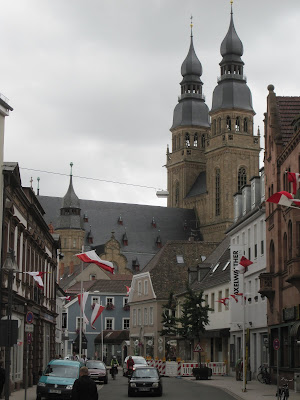 We're a little parched after our walk from the train station so we stopped in Weinstube Schwarzansel (Blackbird Wine Room). 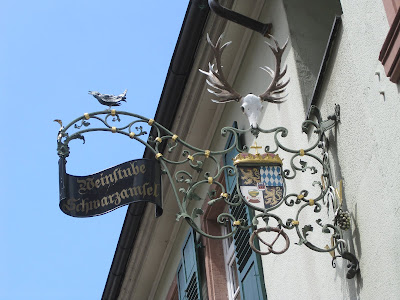 Jeff and I, Linda and Cassius, Beth and Harpo at the Schwarzansel in Speyer.  Note we have our team drinking shirts on. 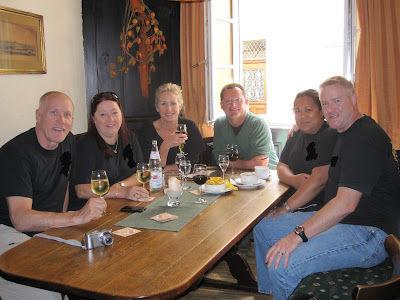 Linda, Cassius and me leaving the Schwarzansel bound for the Brezelfest. Look at what we’re wearing. It’s the 14th of July, for goodness sakes, and we’ve got coats on. 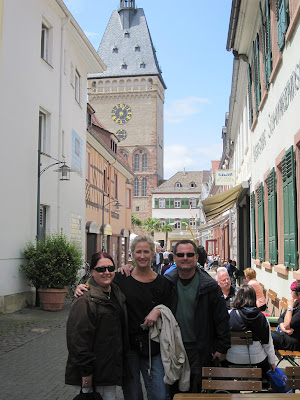 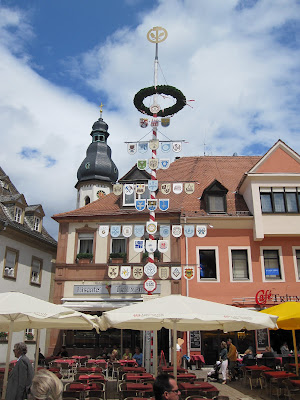 Kaiserdom zu Speyer (Imperial Cathedral of Speyer) dates back to 1030. The tombs of eight Holy Roman emperors and German kings are beneath the cathedral high altar. 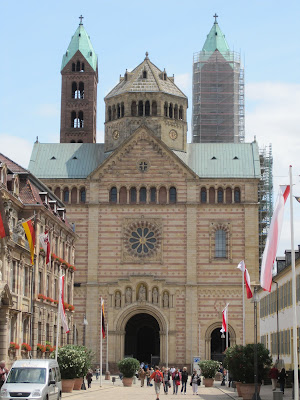 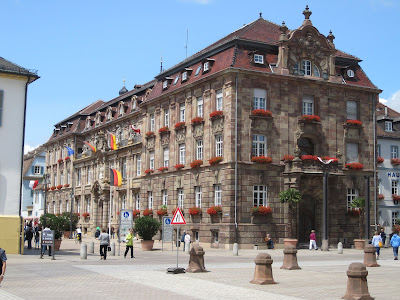 We made it!! The Speyer Brezelfest. 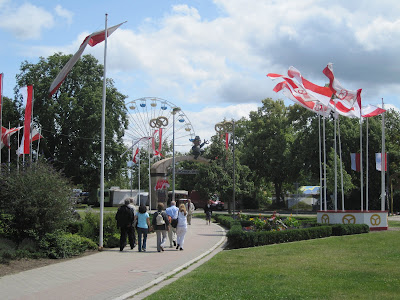 Entrance to the Speyer Brezelfest. The city crest to the left, Brezels above and a strange little guy with beer and Brezel. We’re still a little early but we know there will be Germans in here ready to fest. 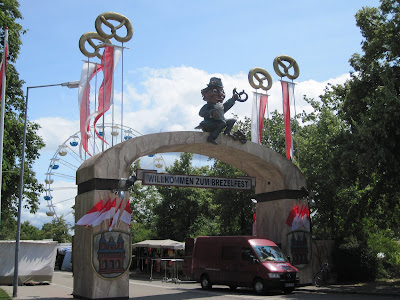 Here’s a figure that depicts the four things Germans love best; walking, brezels, football and, at the top of the list, beer. 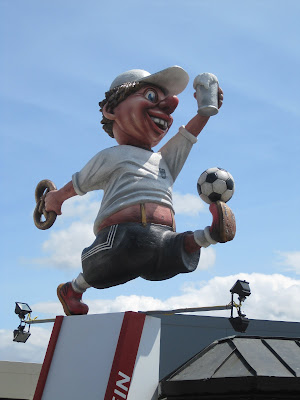 What did I tell you, we were early but there were these wonderful people that were willing to sell us beer. Jeff and Linda. 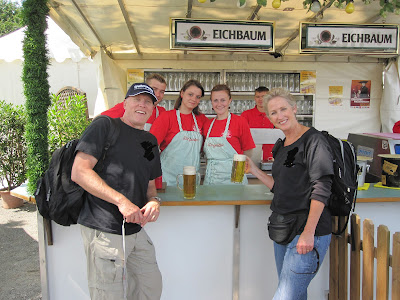 Ah, yes, the sun is out!! That hasn’t happened much this summer in Germany. Harpo, Beth, Jeff, me and Cassius. You can see Jeff has his beer cover along. 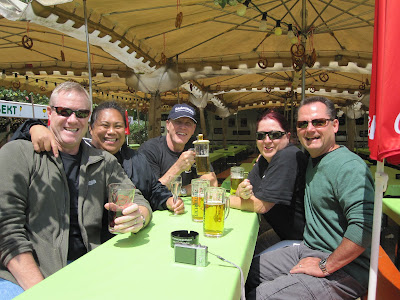 It’s not uncommon at all here in Germany to get a fresh beer poured directly from a wooden barrel and that was the case at a few places at the Speyer Brezelfest. 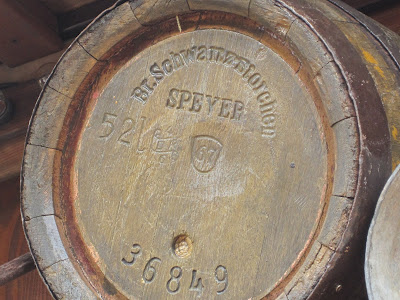 Speaking of barrels, we’re in one. On the right Nicole and Cajun have joined us. They forgot their team drinking shirts. 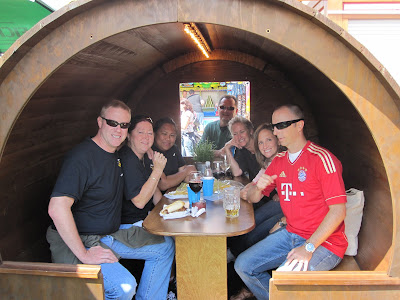 Germans love me. We’re at the Brezelfest souvenir vendor. 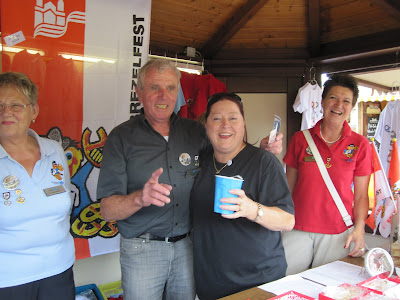 What did I tell you, Germans love me. This gentleman was walking his Brezels. Strangely, 3 or 4 Brezel on a string. He just asked that I didn’t put this picture on Facebook. 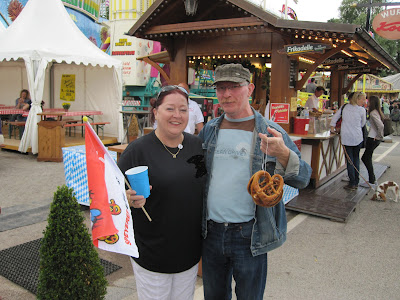 The Brezelfest midway. That’s pretty much the sky we’ve had all summer. 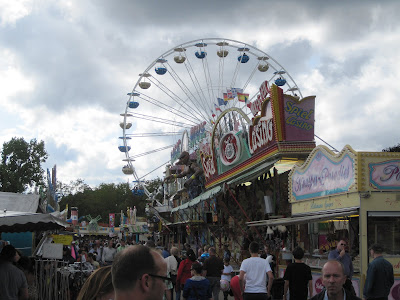 That’s the kind of day it was. Cloudy and threatening, then sunny and warm. 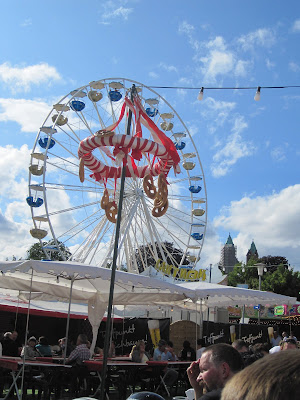 Jeff and a friendly Tyrannosaurus Rex. 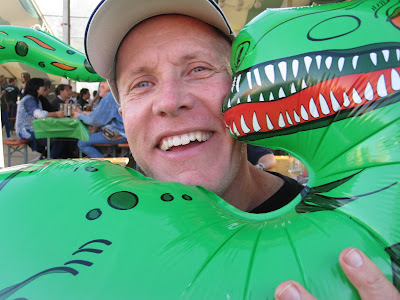 Jeff with a couple of BAB, big ass beers. These are Eichbaum (oak tree) beers. 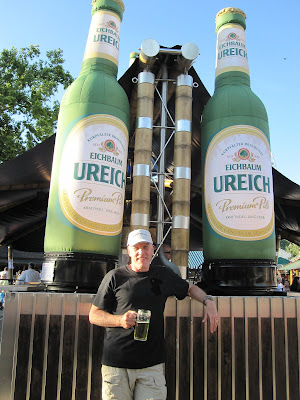 Jeff with one another BAB, big ass Brezel. 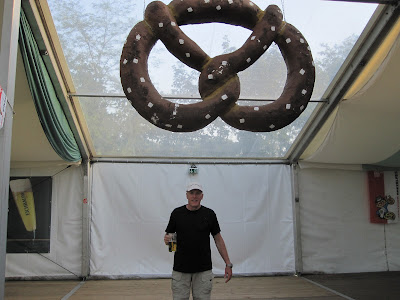 Meandering our way to the train station, going home, we hope.  We're running a little late.


Originally, we were planning on catching the 1925 (725 PM) train back home. Well, that turned into the 2002 (1002 PM) train. We’re across the street now from the train station making sure that we’re adequately hydrated for the trip home. 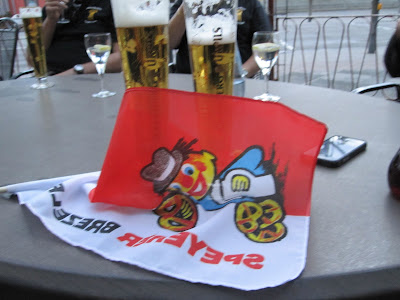 Oops, that extra hydration may have affected our decision making process!! We got off at the wrong train stop to change trains. Luckily, one last train of the night was on its way. As long as we caught that we’d recover from our error and not have to spend the night here. Linda’s spending the 45 minute wait down there out of the rain. 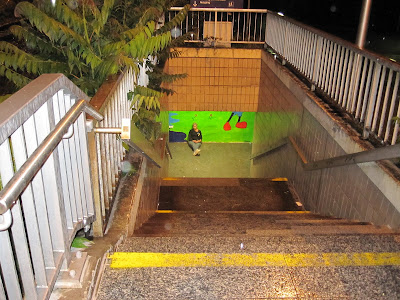 Well, we made it home about 0115AM, a lot better than 9AM. Just one more of those situations that make these little trips memorable. In spite of the get-home trip it was a great day and a fun festival. Got another one coming up this weekend so watch for that.  PROST!!!
Posted by Sandy and Jeff at Saturday, July 21, 2012