Before refrigeration, new beer was cooled in caves dug into lake shores and river banks. This allowed a cool place to store the beer and to be close to an ice source in the winter when large blocks could be cut out and pulled into the caves, lasting well into the summer. To help keep these caves cool brewers planted trees, especially chestnut trees with their large leaves, to shade the cave and keep out any warm temperatures. Eventually, brewers would place tables among the chestnut trees and sell their beer just outside these caves and so, beer gardens were born.

These large beer gardens in Bavaria, such as Hirshgarten, Augustiner Keller and Chinesischer Turm, all have that chestnut tree similarity and are wonderful places to sit in the shade and enjoy a great German beer. But with the shade those chestnut trees bring a small problem, tree droppings. Those droppings, for the most part, are small buds from the trees but can, worse case, also be larger droppings from birds or, in the fall, full size chestnuts; none of which is desirable in your beer. The shade of the trees also attracts insects and the buds of the trees and flowers decorating the garden can attract bees. Those too can unfortunately end up in your beer. So what’s the answer to prevent these intrusions to a cool mug of the amber nectar?  The answer is, a beer cover.

Covering for a beer mug or stein comes in many forms; an attached pewter top, a beer coaster, your hand, an ash tray, anything to keep the bugs and bits out of the beer. On our most recent trip to Munich Jeff found the perfect cover and here it is. 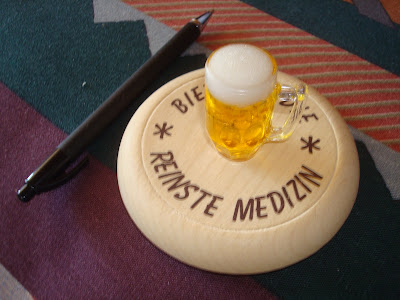 This beer cover has the perfect statement. Bier ist die reinste Medizin. Beer is the purist medicine. And it really is. There’s the little mug of golden amber nectar on top which is cute and a bold statement, good beer lies below. 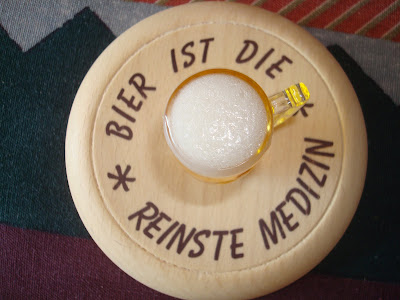 And here’s Jeff’s beer cover in action. Take that buds and bugs. 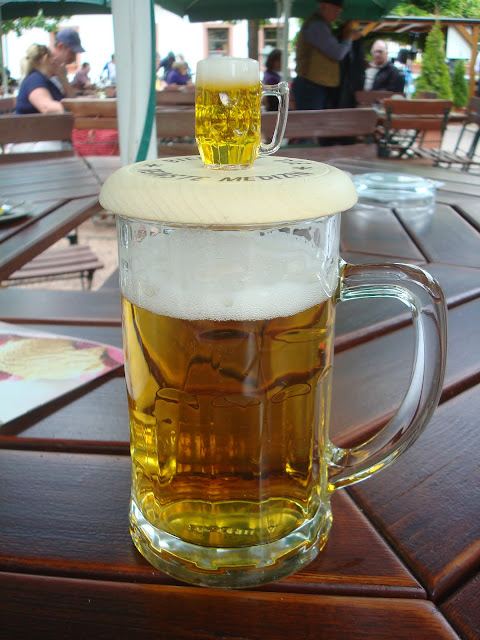 By the way, those beers that needed storage in a cool place became known as lagers. Lager is the German word for storage. And now you know the rest of the story.
Posted by Sandy and Jeff at Wednesday, July 18, 2012