Last Saturday we drove to Grünstadt, a town at the northern end of the German Weinstraße. We had been told that the annual Grünstadt wine festival was something special and so wanted to see it and drink of it for ourselves.

Grünstadt sits on the north side of the A-6 autobahn and one of its claims to fame, at least among U.S. service members, is that it’s the location of the U.S. commissary bakery facility; it’s where they bake all the bread for American commissaries in Europe. Of course, the town wouldn’t be on the Weinstraße if it didn’t have a significant wine industry too and, although its winefest was highly recommended by German friends, what we found was a bit of disappointing.

Jeff and I arrived in Grünstadt around 1:30 PM and found the festival in the main town square. The town web site advertised an 1100 festival opening but what we found was that hardly anyone was there. The weather forecast was for rain and more rain so that might have had something to do with it but maybe the size of the fest had something to do with it too. We certainly would have expected something bigger for of town of this size but what they did have was nice and well situated. This is a picture of the one large vintner tent. Eight different vintners sold their wines from inside this tent. 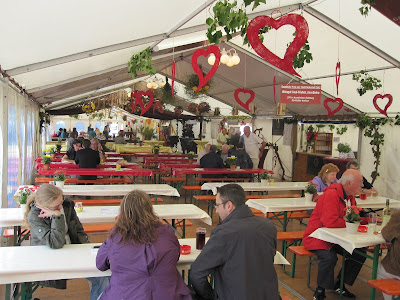 This was a really nice tent and it proved a wonderful place to be about ten minutes after this picture was taken when the skies opened with a torrential down pour and thundering lightning strikes within a couple hundred meters. Very good wine though and those 1/2-liter glasses aren't for sissies. There was just one food vendor tent but they were making some awesome German specialties. Here’s a the Pfalzteller (local plate) that Jeff and I shared which included bratwurst, lieberknodel (liver dumpling), saumagen (pig stomach), pan fried potatoes and sauerkraut. Everything was excellent!! 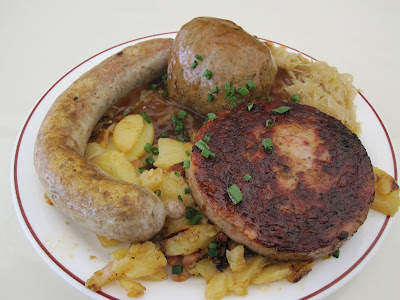 Looking at that plate you can see there’s a lot of food there which includes a whole lot of calories. We were quite surprised to see how many folks were eating this big plate of food all on their own. Even this couple next to us both had their own plate. 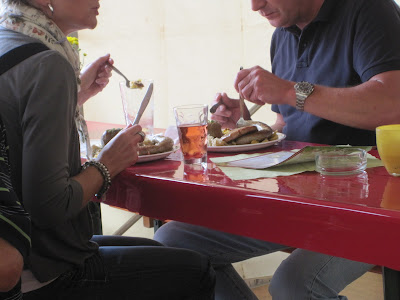 There were no beer vendors at the Grünstadt winefest but conveniently, right on the perimeter of the square is Brauerhaus Grünstadt, the local town beer hall and brewery. 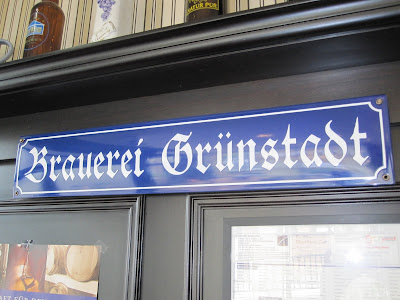 The Brauerhaus Grünstadt proved to be a great place. Great beer hall décor and some of our favorite beer, Kloster Andechs, in the form of their gold Helles.  The yellow rose and lit candle was a nice touch too. 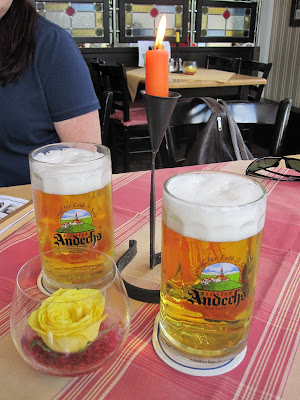 Finally, it stopped raining and we were able to stand outside and enjoy a scrumptious ham sandwich and a Flammkuchen. Flammkuchen is a local favorite that originates from the Alsacian region of France. It’s made with a paper thin bread crust with white cheese and a special sour crème spread. Then sprinkled with some other preferences; ham, bacon, onions or chopped veggie leaves of some sort. But, don’t call it a pizza. The crust is so thin that the Flammkuchen only takes one to two minutes to properly bake. It’s very tasty and light. 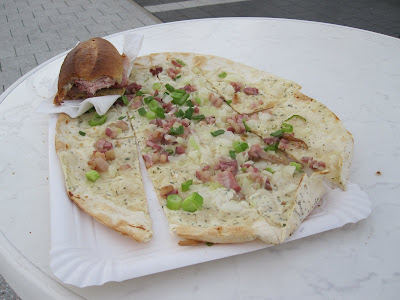 This video shows that the festival is finally starting to spin up, a little. It hasn’t rained in a while so vendors have dried off the tables and benches and folks have finally wandered outside. You’ll recognize the song. Lots of American songs played at these festivals.


OK, those little girls got me motivated. It’s time to dance!!  You'll recognize this song too.

Maybe not as big or as grand as we expected.  Certainly not as dry as we'd hoped.  But, in spite of all that we had a fun day; great food, great wine and beer. Another memorable day in Deutschland.  PROST!!
Posted by Sandy and Jeff at Thursday, July 26, 2012