Have you ever wondered what happened to the line of royalty that once existed in Germany and the various states that made up the country; probably not. But, in our travels, we’ve learned that these royal descendants are very much alive and active in German society. It’s an interesting thought to think that if things had evolved differently these people would be kings and emperors. Here are a couple examples. 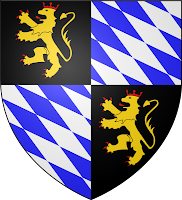 In Bavaria, the country, and eventually the state, the Wittlesbach family reigned from 1180 until the end of World War I in 1918. During that time their family members included two Holy Roman Emperors, Kings of Hungary, Denmark, Norway, Sweden and Greece, in addition to the Dukes, Electors, and Kings of Bavaria. The Wittelsbachs built magnificent castes and palaces throughout Bavaria such as Nymphenburg, Linderhof and Neuschwanstein. The last royal ruler of Bavaria was King Ludwig III who ruled from 1913-1918. That all came to an end when Germany lost World War I and, by German law, royal titles were no longer officially recognized. To the right is the Wittelsbach family coat of arms. 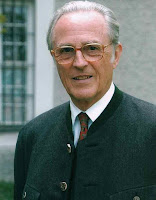 Today the head of the Wittelsbach family is Ludwig III’s great-grandson, 78 year old Franz, Duke of Bavaria. Interestingly, also as a descendant of Charles I of England and a member of the House of Stuart, according to the Jacobite view of English royal lineage, Franz is the legitimate heir and rightful king of England. Unmarried with no children, Franz lives in an apartment within the Nymphenburg Palace in Munich, the once summer home of Wittelsbach kings. He’s a senator of the University of Munich and an honorary member of a number of civic, religious and scientific organizations within Germany. None of those sound like they pay much so I’m assuming he’s inherited a tidy sum. Again, had things been different he could very well be wearing silk stockings and pink satin pants. 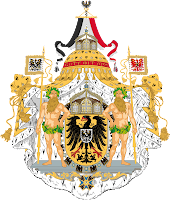 OK, it’d be nice to be king of Bavaria but what about Emperor, that would really be sweet. The House of Hohenzollern, established during the 11th century, were the Dukes, Counts and Kings of Prussia. When Germany was unified after the defeat of France in 1871 they became the Emperors of Germany. The last reigning Emperor of Germany was Wilhelm II, Kaiser Wilhelm, who was a driving force that led Europe to the first world war and a strong proponent of Germany’s military during that war. The Kaiser was forced to abdicate at the end of WW I. Despite the abdication, the Hohenzollern family never relinquished their claims to the thrones of Prussia and Germany. At right is the House of Hohenzollern family coat of arms with the Prussian black eagle crest in the center. 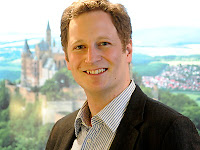 Today, the great-great grandson of Wilhelm II is the head of the House of Hohenzollern, Georg Friedrich Ferdinand, Prince of Prussia. Here he is to the left with the family's Hohehzollern Castle in the background. The 35 year old Georg Friedrich just married for the first time in 2011. He works for a company that helps universities bring their ideas and innovations to the commercial market. (That’s gotta be fun for that CEO, telling his friends the emperor works for him.) He probably doesn’t even need to work since he’s been declared in German courts as the primary beneficiary of a trust established for the descendants of Wilhelm II. I’m sure that’s nice but he could have been the Emperor and, given the nature of 20th century Germany, who knows how big that empire might have been, if things had happened differently. Just saying . . . what if?
Posted by Sandy and Jeff at Tuesday, March 06, 2012