An event that Jeff and I have wanted to experience is the Munich Starkbierfest (strong beer festival) and this year we had tickets, last Saturday, 17 March, which, by the way, was also St. Patrick’s Day. What a concept, a strong beer festival on one of the biggest beer drinking days of the year.

Starkbierzeit (strong beer season) is known as the “fifth season” in Munich. It takes place from the end of February to the end of March which covers most of the Lent.  In fact, that’s how Starkbier came about in the first place. Way back in 1651 the Paulaner monks of Munich brewed their first Salvator Starkbier to help them through the month of Lent fasting. That beer was so dark and heavy the monks called it Flüssiges Brot (liquid bread).

When the Pope heard about these Munich monks drinking beer to help them through their fasting, he ordered a barrel of the Salvator be sent to Rome so that he could decide whether this beer violated the intent of the Lent sacrifice. Well, by the time this new Starkbier made it to the Vatican it had gone bad. Upon tasting the spoiled beer the Pope declared it so horrible that he decided that if these German monks wanted to drink it they could. With that, even now, Starkbier is the only alcoholic beverage authorized by the Vatican for consumption during Lent.

By 1751 the first public Starkbier festival took place in Munich. By then, other breweries were also producing a Starkbier and each brewery followed the Salvator example by naming their version with the “ator” suffix; Augustiner Maximator, Löwenbräu Triamphator, Hacker-Pschorr Animator and Hofbräu Delicator.

So we arrived in Munich on Friday and on Saturday started off with some St. Patrick’s Day festivities and then eased into the nights Starkbier events. Here are some pictures of our adventures in Munich.

After our 3½ hour drive to Munich and checking into the hotel we needed someplace where we could get something to eat and a sip of the amber nectar. Near the Munich main train station is the Park Café, a beer hall that we’d never been to before. It was a beautiful sunny day, almost 70° so it felt great to sit outside and soak up some rays.  See the one green shirt? That's me prepping for the next day, St. Patrick's Day. 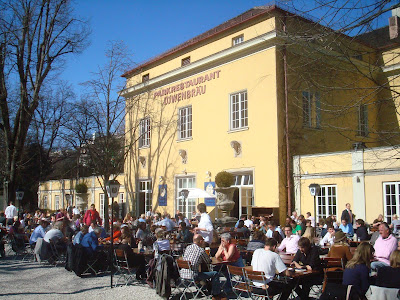 Park Café, brought to you by Löwenbräu. 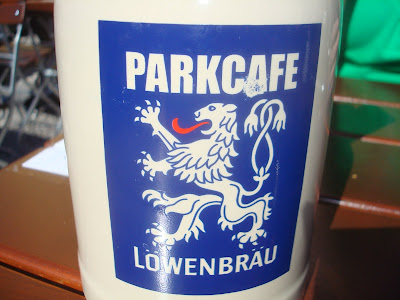 A fifteen minute walk from the Park Café brought us to the Augustiner Keller. 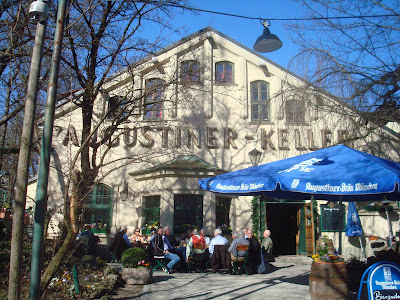 The beer garden was still a bit shabby from the winter months but it was fun to see the people outside again. Eventually, this beer garden will have enough tables set up to sit 5000 people. 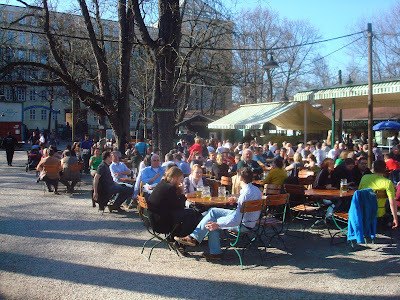 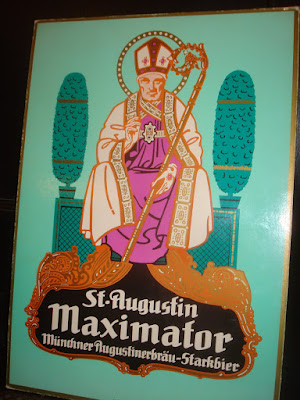 Between Karlsplatz and the Marienplatz is Munich’s main shopper street Neunhauserstraße/Kaufingerstraße. Along the way there we saw this church renovation going on. We’ve seen this before, scaffolding covered with the image of the building being renovated. A lot of work to try and keep the tourists happy. 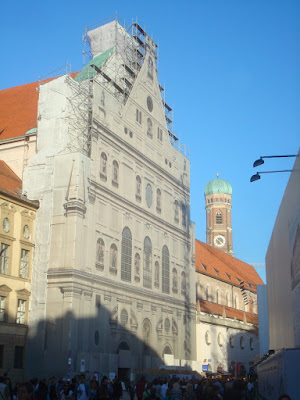 There it is again, the same wild boar statue that’s in Kirchheimbolanden. This one’s in front of the German Hunter and Fisher Museum and, of course, Jeff needs his picture taken with it.  It's Friday but we’re already wearing our St. Patrick’s Day green. 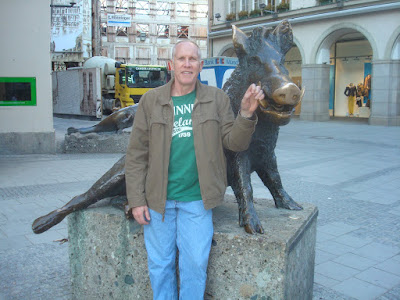 Had to make a stop at the Andecher am Dom for some of the world’s greatest beer, Kloster Andechs Dopplebock Dunkel. 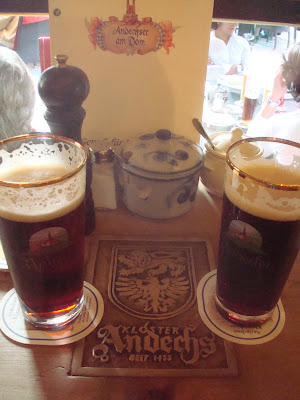 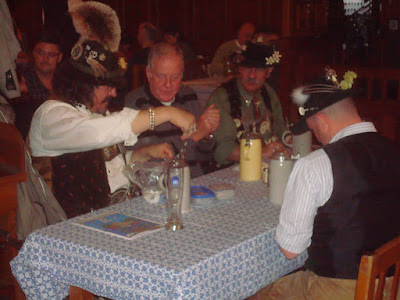 Very good band on this evening and much younger than you normally see here. 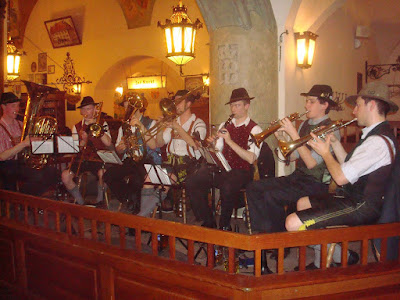 It’s Saturday morning, St. Patrick’s Day, and tonight the Starkbier festival. We were on our way to breakfast when we passed this window. Schwein Hax’n already roasting away on the spit. That glass is too hot to touch. 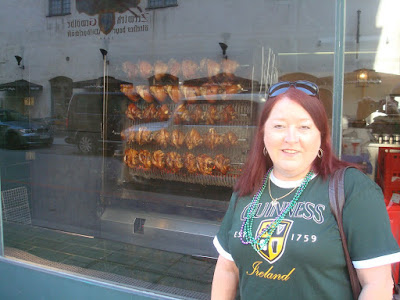 Surprise, we’re at the Hofbräuhaus for breakfast; weißwurst, sweet mustard and a brezel. Oh yeah, a beer too. 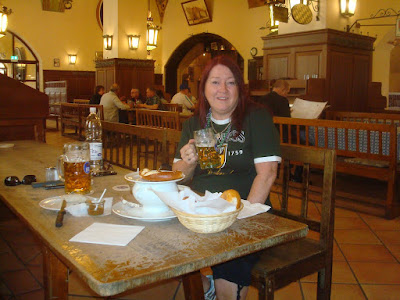 After breakfast we walked around, up and down, and checked out all the nooks and crannies in the Hofbräuhaus. They’re actually very good about letting you wander about the building. This large hall is on the third floor. This is where certain pre-war orators would speak, yes, even that upstart Austrian with the funny mustache. Above the stage you can see an area that is the in-house museum which looks at the over 400 year history of the Hofbräuhaus. 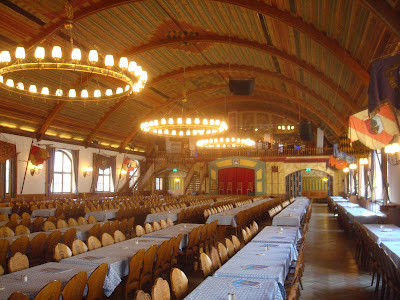 One of the areas in the museum asks how many beer steins can a beer maid carry? There’s a picture of one lady carrying sixteen, full, one-liter ceramic steins. They even have a place where you can give it try. Here’s I’m grimacing to hold up eight, empty steins.  That's a cardboard cutout behind me, not a beer maid ghost. 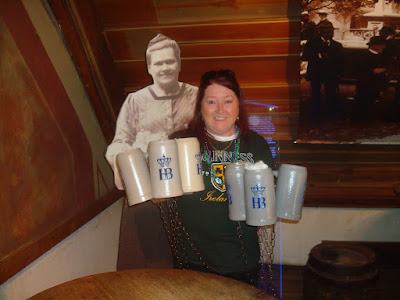 OK, time to start some St. Patrick’s Day celebration. Along the way to our first Irish pub we walked through the Marienplatz and discovered this animal rights convention. Here’s one of the stages with a live band extolling the need for equal rights for all creatures. Meat Means Murder!!!  They're probably not going to eat at the Schwein Hax'n place. 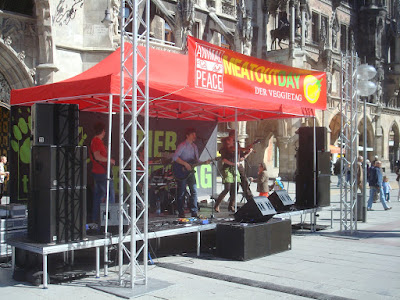 There are only a handful of Irish pubs in Munich. The closest one to our hotel is behind the Frauenkirche, Munich’s famous, large, double-domed cathedral, It’s also just a short walk from the Marienplatz, it's Kilian’s Irish Pub. The sun was shining, it was the beginning of a great day and we were no longer the only folks wearing green.  You might not think that Munich is much of a place to celebrate St. Patrick’s Day. However, the largest parade in all of Europe, each and every year, is the St. Patrick’s Day parade in Munich. It’s big and tens of thousands of people line the streets to watch. Unfortunately, they hold the parade on the last Sunday before St. Patrick’s Day, which was the previous weekend. The parade and its aftermath are a big party, the actual St. Patrick’s Day, not so much. 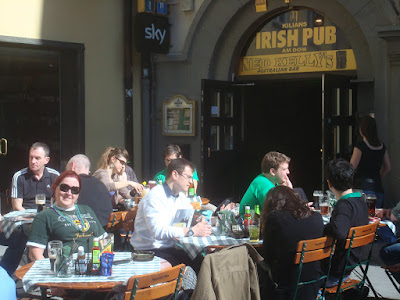 Well, for sure you gotta have a Guinness on St. Patrick's Day. I’m not a big fan, Jeff likes it. Here’s the first Guinness beer we’ve ever ordered in Munich. According to Jeff it sucked. No smokey taste, very bland, very flat. Glad I got a half pint. 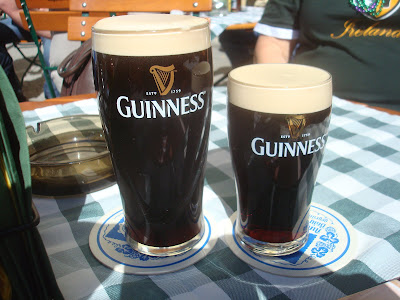 Now this was somewhat confusing. Is this place an Irish pub or an Australian bar? 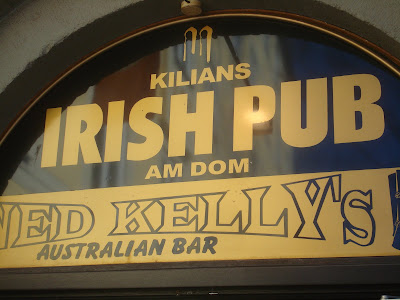 From there we hopped on the S-Bahn and went two stops east from the Marienplatz. Then we walked just a couple blocks and ended up at Molly Malone’s, another of Munich’s Irish pubs. Very typical, 6 Nations Rugby on the TV.  We skipped the Guinness after the last place. 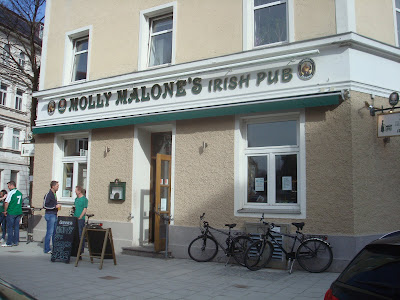 I had a very tasty fish and chips and Jeff had this interesting Sheppard’s Pie; tasted great, just made a little differently. 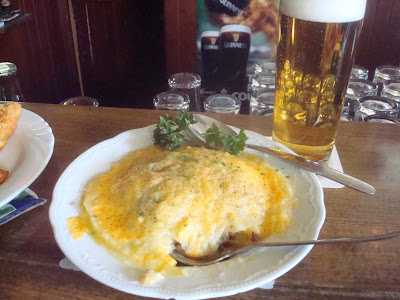 Time to make the transition from St. Patrick’s Day to the Starkbier festival. Conveniently, Molly Malone’s is a short S-Bahn ride to the location of the original Starkbier festival location, Paulaner “Nockherberg” Brewery and here we are. There’s actually two operations going on here at the brewery. Their 3000 seat beer garden, fun in the sun drinking beer, and the actual Starkbier festival inside the brewery festsaal  (festival hall). We’re here for the beer garden but we'll sample the Salvator. 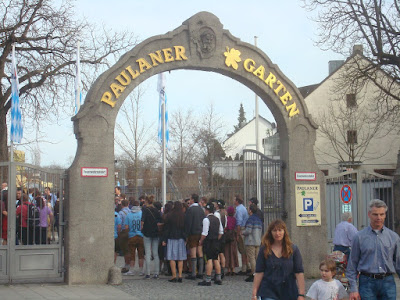 Just inside the beer garden Jeff found another wild boar thing. Of course, here’s the picture. 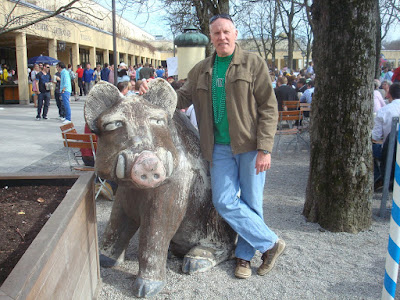 Here’s the Starkbier festival hall inside Nockherberg. It seats about 5000. No tickets required, just show up, get a beer and sit down. 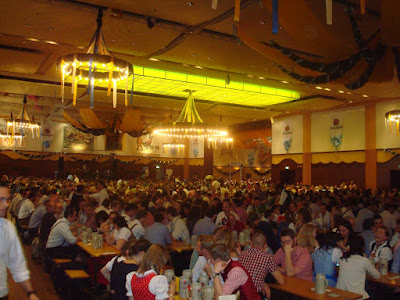 Here’s a video that pans the Paulaner Keller beer garden.  This beer garden seats 3000, there are others in Munich that sit 8000 and 7000.

We weren’t the only St. Patrick’s Day celebrators but we kind of noticed that anyone that was dressed in green was either, Irish, Brits or American. These guys were stacking their beer steins. Here at Paulaner Keller they serve their beer in these nice one-liter ceramic steins called a Keferloher. 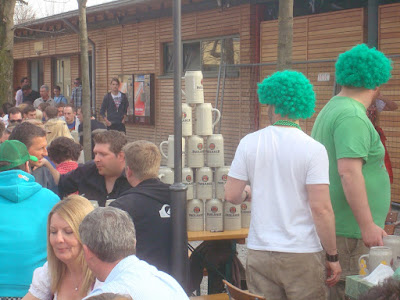 A water fountain statue of the Paulaner logo. Thank you monks for bringing us beer. 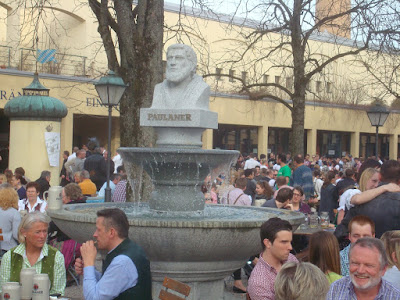 Stopped at the hotel for an hour of rest. This double celebration thing can take a lot out of you. But, we’re right on time, 1800 (6PM) at the Löwenbräu Keller for the 2012 Starkbierfest. 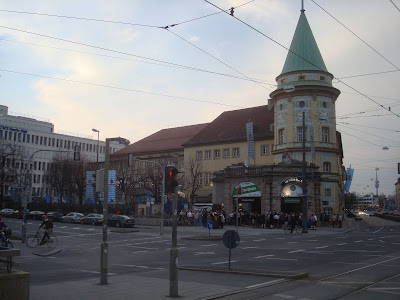 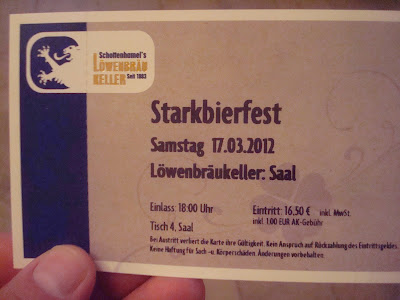 Here it is. Two liters of Löwenbräu Triamphator. 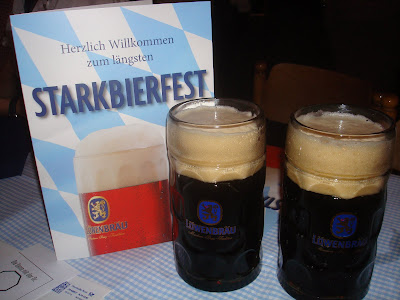 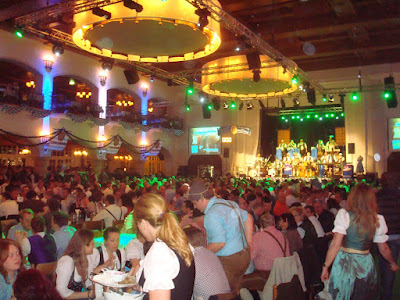 Besides the band and beer the two main events at the Löwenbräu Keller were the best looking young woman contest, really rather boring, and the strongman competition, which was fun to watch. They had a small booth set up to the side of the festival hall where guys could demonstrate their strength on this springed, resistance machine. Jeff was quite impressed with this guy. Once the top twenty men are selected they all moved to the stage to have a go at a 250 kilogram stone, 550 lbs. 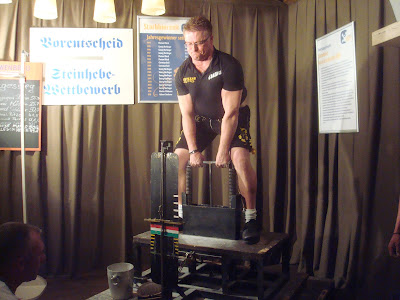 Here’s video of some of the highlights of the night. The band was great!! The dancing dudes were fun to watch. One of the guys at our table called this the mosquito dance because it looks like their swatting at mosquitoes. The yodeler, well, we figured if our friend Borg could yodel, this is what he’d look like. Finally, two strongman competitors; one weak and the other, Jeff’s favorite, very strong. You can see the strongman competitors lined up on stage, #12 is the ultimate winner with a lift of 50.7 centimeters.

Well what a fun day. Big thumbs up for the Starkbierzeit. Mixed reviews on the St. Patrick's Day celebration in Munich but it was fun to visit some establishments that we'd never been to before. So with that, a big PROST and a little sláinte.
Posted by Sandy and Jeff at Thursday, March 22, 2012