Jeff and I drove up to Frankfurt Saturday morning. We’ve spent very little time in Frankfurt mainly because there seems to always be other, more interesting places to go and the common nobody-goes-there-because-it’s-always-so-crowded mentality. But, we’ve heard some good things about Frankfurt and wanted to at least spend a day and a night in the city.

The correct full name of the city is Frankfurt am Main (Frankfurt on the Main [River]). The town name, which is derived from the Germanic Franks tribe, was first mentioned in 794 but there were probably Roman settlements in the area as early as the first century. The city was one of the most important centers of the Holy Roman Empire. Because it has long been a center of commerce it has been a focal point of many European armies moving through the region going either east or west. Frankfurt was heavily bombed in WW II with its medieval city center totally destroyed. In spite of that, there was heavy resistance as U.S. forces entered the city resulting in intense street fighting before Frankfurt formally surrendered.

Today Frankfurt is Germany’s center of banking, transportation and trade. It’s the fifth largest city in Germany and, although it’s the country’s most expensive, it is also the richest city, based on per capita GDP, in Europe. It is one of the few European cities that have a skyscraper skyline which has the locals affectionately calling Frankfurt am Main, Mainhattan.

We really enjoyed the somewhat quirky hotel we stayed in, the Fleming Deluxe. One of the first things you notice when you walk in the hotel lobby is this very different elevator system called a Brandfall. As you can see from this video it’s a continuously moving lift, one side going up, the other down. The Brandfall in the Fleming is the only operating system of its kind in all of Europe. It’s relatively simple to step on and off but you certainly don’t want to dawdle. We rode the entire route which included the over the top shift from the up to the down side and under the bottom for a similar transition from down to up. For those that would prefer to avoid the Brandfall and, for sure, anyone with bags, there’s a modern elevator across the lobby.

The other oddity in the Fleming Deluxe is the shower. This building has only been a hotel for five years, previously being an office complex. When the Fleming chain renovated the building they chose to put a good sized glass shower stall in the center of each hotel room. It’s probably not a big issue for most couples but if you’re a couple of guys sharing a room it might seem a bit strange showering there in the middle of the room.

Right outside the front of the hotel is the Eschenheimer Turm a 15th century tower that was originally a gate to the medieval city. It’s now the oldest structure in Frankfurt’s inner city. 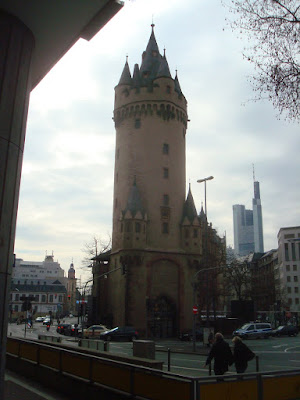 Just a few blocks from our hotel we happened upon the Hauptwache. It was built in 1730 and used as a prison. In 1904 it became a police station. The Hauptwache was moved to its present location in 1964 during the construction of the city’s underground so that it could be located at one of the U-Bahn stations. 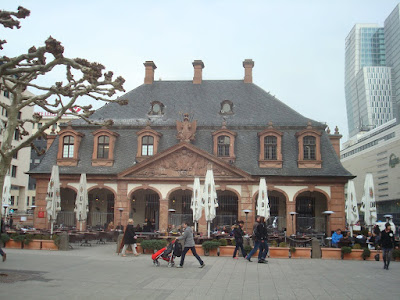 Birthplace of Johann Wolfgang von Goethe and the entry to his museum on the right.  Goethe was Germany's renaissance man.  He lived from the mid 1700's to well into the 1800's.  He was a painter, writer, biologist, physicist and poet. 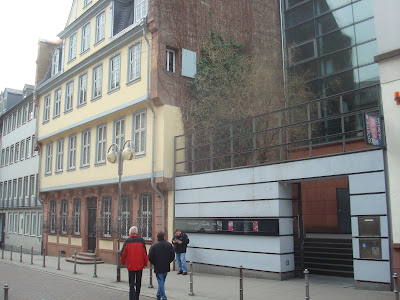 The Römerberg is the main square in the Frankfurt old town center. It gets its name from Römer (Roman) which is a complex of nine houses seen here that make up the Frankfurt Rathaus (city hall). These buildings were badly damaged during WW II and have been exquisitely renovated to their present condition. 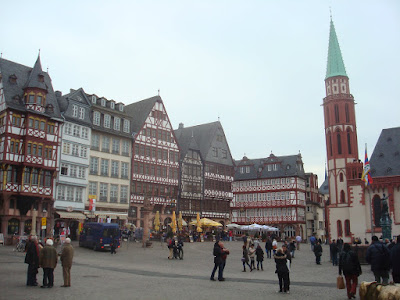 One of the beautiful Römer half-timbered buildings with the Frankfurt Cathedral in the background. 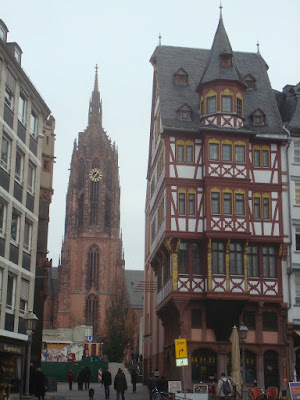 Opposite the Römer in the Römerberg are these buildings which add a great deal to the ambiance of the old town square. 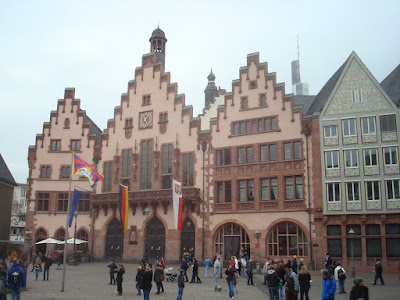 We’d walked a ways from our hotel to the Römerberg so it was time to replenish our bodily fluids with some of the local amber nectar, Binding Pils. 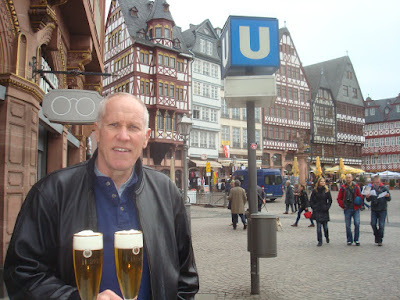 Dom Sankt Bartholomäus (Saint Bartholomeus's Cathedral), the Frankfurt Cathedral is the largest church in Frankfurt, originally constructed in the 14th and 15th century. For over two hundred years the emperors of the Holy Roman Empire were elected here. The cathedral was heavily damaged in WW II and rebuilt in the 1950’s. 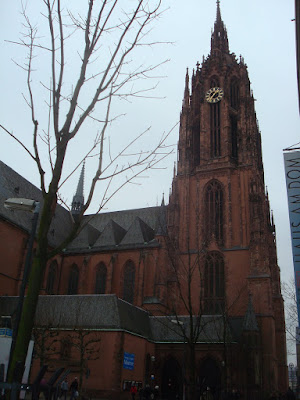 One of the main shopping areas of Frankfurt is the Zeil. It’s a wide pedestrian street with top line shops. 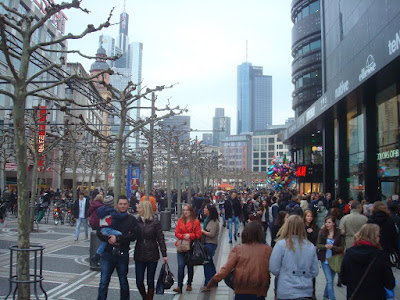 At one end of the Zeil we found this fruit and vegetable market, at least that’s all it was according to Jeff. But, upon my insistence we found out that it was much more. 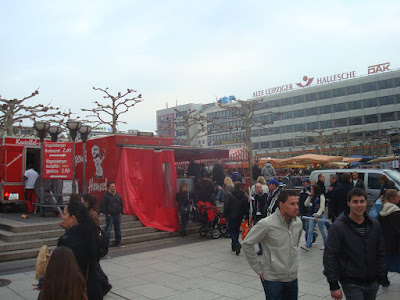 Once within the outside perimeter vendors we found this market had a wide assortment of drink vendors; beer, champagne, wine and, a Frankfurt favorite, Apfelwein, apple wine, or as it’s called locally, Ebbelwoi.  Jeff and I had this Bio Bierbacher.  In Germany when they say Bio they're talking organic.  When it comes to Bio Bier that seems somewhat redundant in Germany because all German beers are brewed under strict purity laws which makes me think all beers here are pretty much organic. 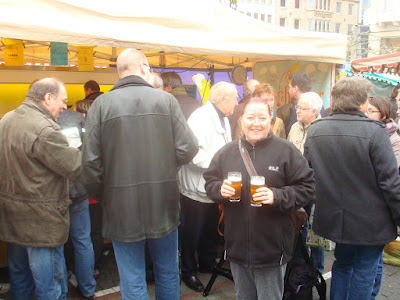 Frankfurt is famous for its Apfelwein.  It has an alcohol content of around 7%. Although we didn’t try any here at the market, we did later in the evening. Because of Frankfurt's love of Apfelwein, or Ebbelwoi as it's referred to locally, the city is sometimes referred to as the “Big Ebbel” another reference to New York City or the “Big Apple.” 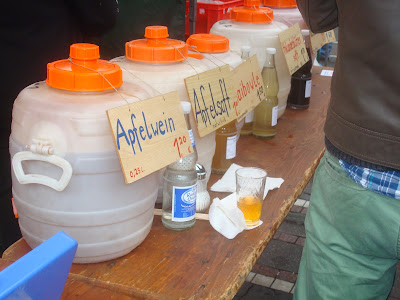 OK, yes it was a fruit and vegetable market too. Turnip anyone? 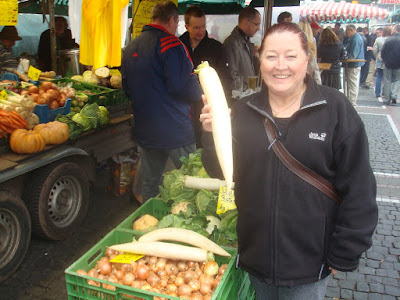 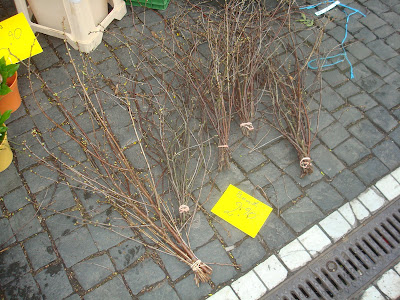 Here's a value shopper. She got her sticks before they were all sold out. 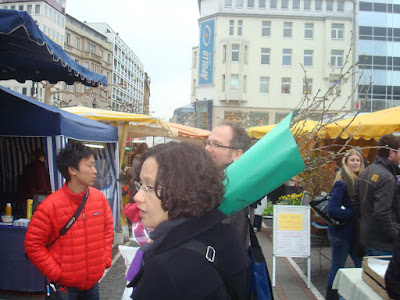 Time for another stop to replenish. Binding Pils for Jeff, some white wine for me. 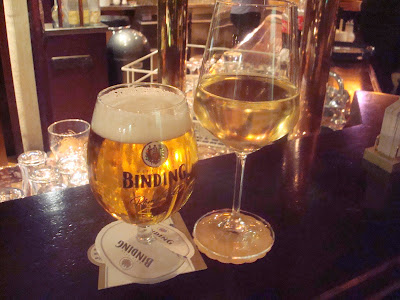 We were looking for Kaiserhofkeller but found that it no longer existed. In it's place now is the Apfelweinkeller. Still a great place for a good meal with an awesome vaulted ceiling, cellar atmosphere. 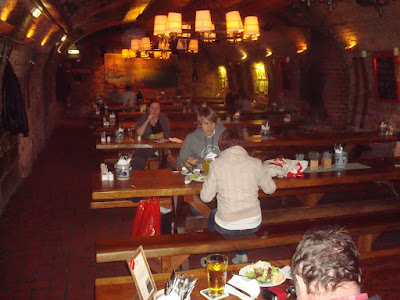 Well, since we're in the Apfelweinkeller I took one for the team and ordered an Apfelwein.  I was expecting it to taste much the same as apple juice or  apple schnapps.  Surprisingly, no, much worse. Of all the things we've tasted here in Europe I'd say the taste that it comes closest to is a Belgium Geuze.  You can read about our opinion of Geuze at this link. 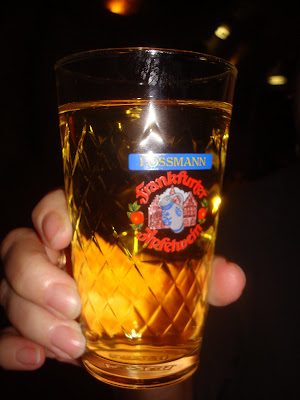 Well, what a fun day in Frankfurt. Got to see some of the sights, drink some of their beer, experience their Apfelwein, ate a great meal and loved the hotel. What else can you ask for from a Saturday in Germany? Not much. Prost!!
Posted by Sandy and Jeff at Tuesday, March 13, 2012