We left Bruges at 0830 on Sunday morning to drive an hour south to the area around the small city of Ypres (pronounced, i prә). Ypres is in the Belgium province of West Flanders about thirty miles from Dunkerque and the English Channel. The town played a pivotal role in the battles of World War I and, as a result, the area surrounding Ypres became known as Flanders Fields. 700,000 allied and axis soldiers were killed in the fighting around Ypres. Although German forces surrounded the city on three sides, other than one single day during the war, German soldiers would only enter Ypres as prisoners of war. Just north of the city Germans used poison gas on the western front for the first time releasing 168 tons of chlorine gas in April 1915. Mustard gas, called Yperite after the city, was also used for the first time near Ypres in late 1917.

British, Canadian, Australian and many other Commonwealth countries would supply troops in the battles around Ypres. British troops intentionally mispronounced the city's name calling it Wipers. By the end of the war 60 different countries had military forces that fought on Flanders Fields. Ypres was an important strategic point in Germany's attempt to sweep through Belgium and enter France from the north. Once the battle lines became relatively stagnant the trenches would run all the way from the North Sea through Belgium and France to the Swiss border.

There were three major battles of Ypres, October/November 1914, April/May 1915 and July to November 1917. The city was repeatedly bombarded by German artillery and, as a result, Ypres was totally destroyed by the end of the war. Amazingly, after the war, using German reparation money, the town was rebuilt and some of Ypres' most impressive medieval buildings were reconstructed to nearly the original design.

Our first stop before driving into Ypres was the Hooge Crater Cemetery just east of the city. Hooge Chateau and stables was a pivotal point of numerous fierce conflicts between British and German forces, changing hands seven times. In July 1915 British forces tunneled almost 200' to beneath the German position and exploded a huge mine that created a crater 40' deep and 130' wide. Germans would use flamethrowers for the first time during the battles here. 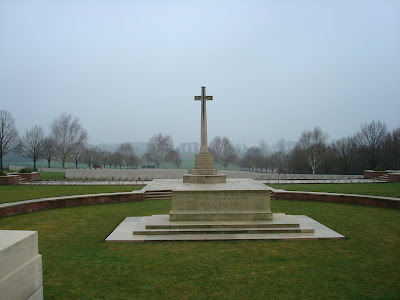 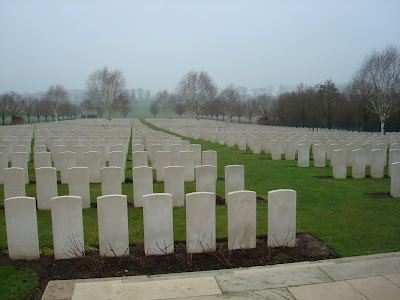 This soldier is believed to be buried somewhere in the Hooge Crater Cemetery. 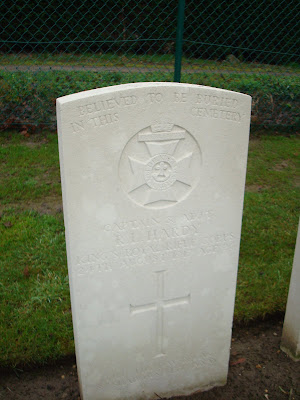 A British soldier. Some graves contained the remains of four or five soldiers. 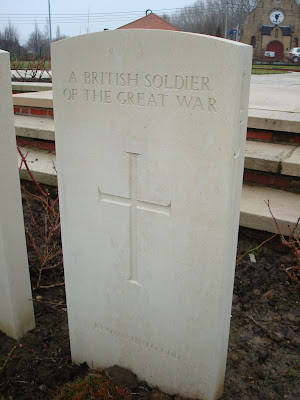 Entering Ypres from the east you drive through Menin Gate Memorial. This memorial was built after the war to commemorate British Commonwealth soldiers who have no known grave and died before August 16, 1917. Every night since 1928, at 8PM, to honor the soldiers of the British Empire who died defending the town, all traffic is stopped around the Gate and buglers from the local fire brigade sound the Last Post. During World War II the Germans forces occupying Ypres prohited the ceremony. But, on the first evening of liberation, September 6, 1944, the observation was resumed. 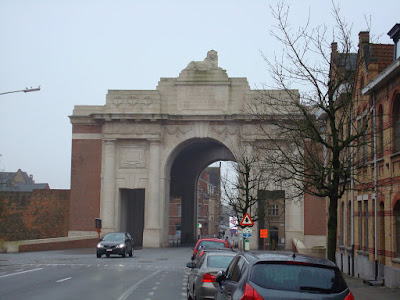 Saint Martin's Cathedral was originally built in 1221 and completely destroyed during World War I. It's been restored but with a higher spire. 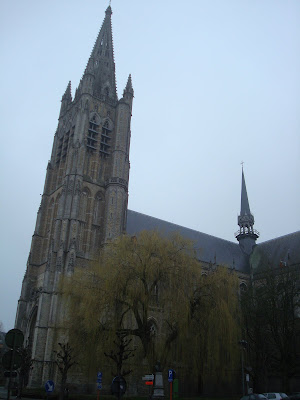 Cloth Hall, a huge commercial building, built in the 13th century. It too was destroyed and rebuilt. Complete renovations were not finished until 1967. Today it houses the remarkable, interactive In Flanders Fields Museum, which depicts Ypres' role in WWI. The reconstrucion is so amazing, if you weren't aware of it's history, you would certainly believe Cloth Hall had been built hundreds of years in the past. 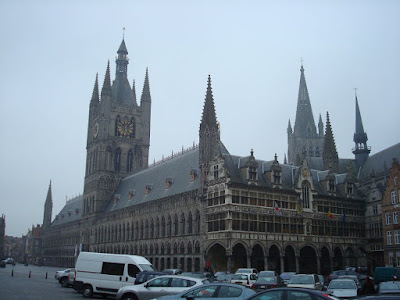 A quote from HG Wells at the entrance to the museum. 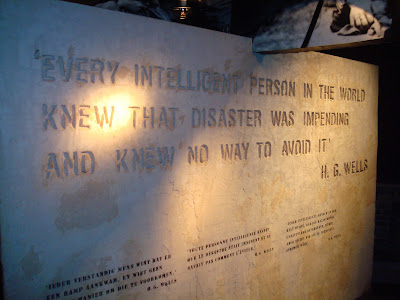 West of Ypres is an area called Sanctuary Woods, Hill 62. Original trench layouts are still visible here. British forces used this wooded area as a field hospital which, as a sanctuary for wounded soldiers, resulted in its name. These galvanized metal sheets were not used during the war but are needed today to prevent the trenches from falling in. 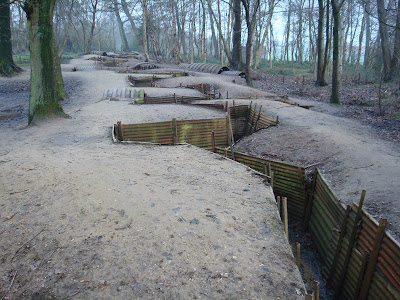 Artillery craters are still visible. This property is still owned by the family of the farmer who returned here after the war and chose to leave a portion of the trenches intact. 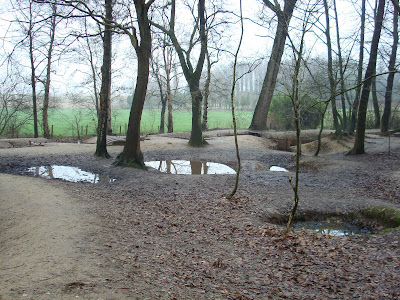 Time to start our four hour drive back home. Driving into and out of Ypres we passed numerous World War I cemeteries, allied and German both. Our visit here was poignant and very moving. Well worth the time and we easily could have spent days taking in all the signigicant points of interest in the area. Bruges and Ypres turned out to be a great trip; fun and educational. Plus, the beer was good too.
Posted by Sandy and Jeff at Saturday, February 26, 2011