Back during the Cold War, most of the US fighter bases in Europe built Hardened Aircraft Shelters (HAS) to protect their jets from a Soviet attack. These structures still exist today and are in use by the active US fighter wings at RAF Lakenheath in the UK, Aviano Air Base in Italy and at Spangdahlem Air Base here in Germany. Most NATO fighter bases have and use HAS's also. Of course, with the Cold War long over, there are numerous closed bases across Europe. One problem countries have when deciding what to do with these disused bases, what to do with the HAS's? By design a HAS is a nearly indestructible building. The expense to tear them down would be huge and, as a result, most countries have decided to just lock them up and leave them in place. Sembach Air Base is about 15 miles east of Ramstein, a 20 minute drive from our house here in Weilerbach. The operational side of the base has been closed for over 15 years. The runway was pulled up and the land is now used by grazing sheep. The HAS's at Sembach have been taken over by a number of companies for various uses; storage facilities, actual company offices or just painting the side of the HAS like a billboard. However, one use of an old HAS at Sembach is quite unique.

This is a side view of a HAS. The doors and front opening are on the left. Two A-10's could be pushed into a single HAS and then closed up. The fan tail on the right is the rear of the HAS. Doors at the rear could be opened and a jet inside could then run its engines with the exhaust diverted by the fan tail. 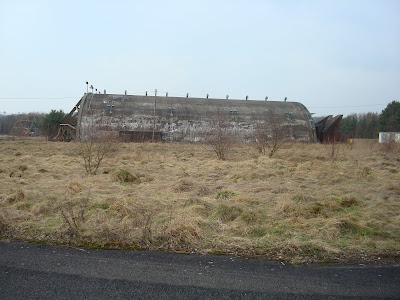 Here you can see the front doors of the HAS that would split and slide open to either side. Behind this front HAS you can see the unique use of one of the other HAS's at Sembach. 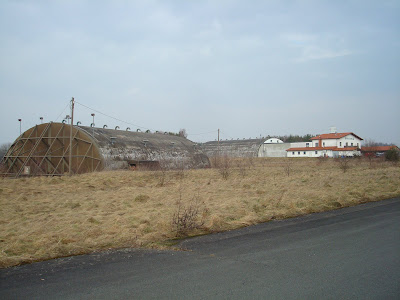 It's a Schützenhaus (Shooting House), Zur Zielscheibe (The Target). It's an indoor shooting range. 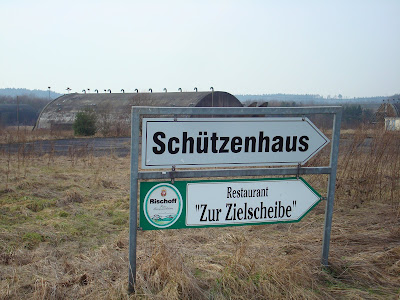 The folks at the Zeilscheibe removed the sliding doors from the front of the HAS, no small feat. Then they built and attached a gasthaus on the front of the HAS. Shooters fire their guns toward the back of the HAS. Last Saturday day Jeff and I were there and found gun enthusiasts from Holland, Luxembourg, Belgium and Germany, all participating in Gunsmoke 8, Westernschießen (Western Shoot). See the second story windows? That's where the owners of the gasthaus live. 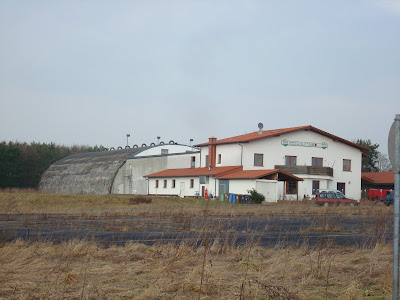 Well, here's the beer part. Jeff and I had a Bischoff in the gasthaus and watched the shooting through the rear, soundproof windows. Even though the walls and windows were soundproofed, when the shooting started the windows reverberated and muffled booms could be heard. 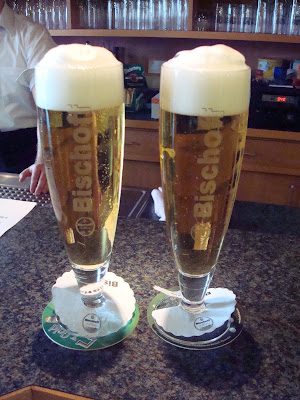 Here's the gun part. Can't see the shooters all that well. There were actually two, parallel identical ranges. This is looking back into the old HAS. Most of the shooters were wearing western style clothing; cowboy hats, chaps, vests, a couple with sheriff badges. The music in the gasthaus and piped into the shooting range was country western but with German singers and lyrics. They were shooting all sorts of western rifles and pistols; muzzleloaders, winchesters etc. 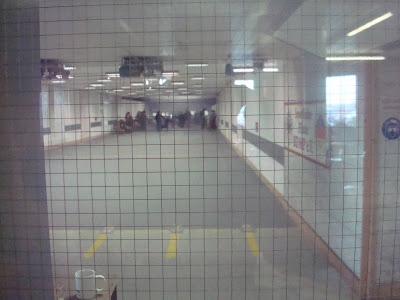 Shooting clubs are very popular in Germany. In fact, at Oktoberfest two of the tents are specifically named after the German love of shooting; Armbrustschützen and the Schützen-Festzelt. Not surprisingly, you have a love of beer and a love of shooting, a beer establishment linked to a shooting range. Germans are so smart.
Posted by Sandy and Jeff at Sunday, February 13, 2011