Those are the words President Kennedy spoke in Berlin June 1963 almost two years after the Soviet Union had constructed the Berlin Wall. Essentially, it translates to "I am a Berliner." What "I am a Berliner" means is up for a little debate.

Obviously, JFK meant to express his and the United States solidarity with the people of Berlin. The statement "I am a Berliner" does that quite nicely. Certainly, the thousands of Berliners that were in the crowd that day understood what the President was trying to convey and they greatly appreciated it. However, the citizens of Berlin who heard JFK that day also had a bit of a chuckle. Now, we're certainly not the Pro from Dover on the German language but we'd heard this tale and asked some of our German friends here why this was any kind of issue at all. The proper way to refer to yourself as a citizen of Berlin would be to say, "Ich bin Berliner." By adding the article "ein" to the statement the sentence now references a non-human subject noun and, it just so happens, a non-human "Berliner" is actually a jelly pastry that's very popular throughout Germany. So the people of Berlin heard President Kennedy say I'm with you, I support you, I stand with you but they also heard, "I'm a jelly-filled pastry."

There's some dispute about this intricate twist in the German language but who really cares, it's all in fun. In fact, you can buy a key chain near the Brandenburg Gate in Berlin that has a small Berliner pastry on a chain with "Ich bin ein Berliner" stamped prominently on it.

Just so you know. Here's a picture of the culprit, the Berliner. You can buy three for 1.29 Euro. Some people call it a jelly doughnut but it's much lighter than a doughnut and really not heavy at all. The ones we bought had a strawberry filling but we've seen them with a cream filling too. 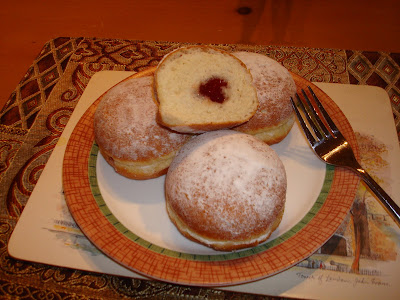 They're very good. Jeff said "Ich aß ein Berliner." I ate a Berliner. The jelly pastry, not a citizen of Berlin. At least he got it straight. 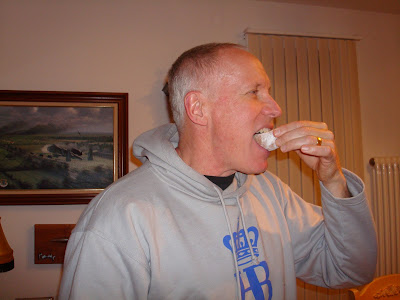