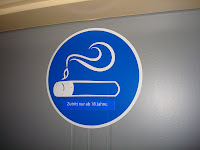 There's still a good amount of cigarette smoking here in Germany. Although at least one German state, Bavaria, has banned smoking inside all public/commercial buildings, a good percentage of businesses elsewhere around the country choose individually to prohibit smoking on their premise. In fact, it's gotten to the point that some establishments post an image like the one to the right that shows smoking is allowed within.

A pack of cigarettes goes for around 5€, or $6.50 so it's not uncommon to see people, young and old, roll their own. You can still see cigarette machines in restaurants, bars and some stores and that leads to an interesting oddity here in Germany. A familiar sight walking through German neighborhoods, city, town or village, is a cigarette machine on the street. Here's a few pictures we took here in Weilerbach.

This guy can walk out of his house in the morning, or any time for that matter, and grab a pack before he climbs into his car. 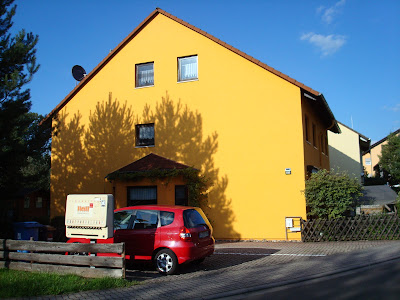 This machine is at the bottom of our hill. 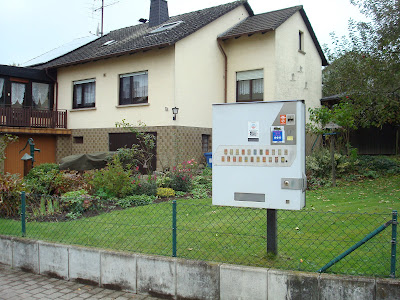 You have to be sixteen to purchase cigarettes in Germany. These machines require a valid ID be swiped through the sensor before cigarettes can be purchased. Then you can make your purchase with cash or credit card. 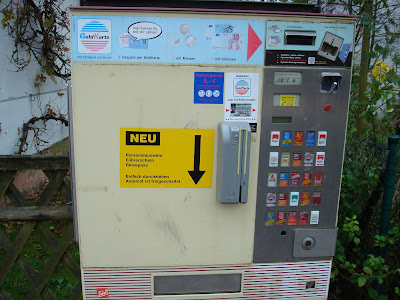 Some brands you recognize. Every pack has bold warnings that cigarettes cause all sorts of health problems. 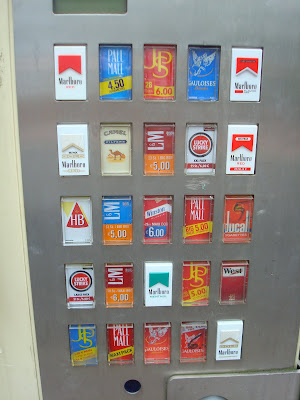 Here's another interesting picture we took during our last visit to Munich. Seven cigarette machines lined up waiting to provide a cancer stick to whoever needs one. These machines were behind the food vendor at the Chinesicher Turm, which happens to be the second largest beer garden in Munich. On a nice day this beer garden can sit 7000 people and since it's outside, in spite of the new Bavarian law, any number of people could be smoking. But seven cigarette machines? 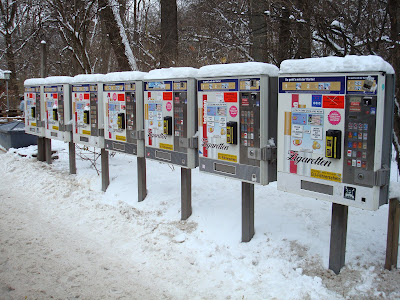 We're not smokers but, thankfully, a lot of places ban it even though there's no law prohibiting smoking. However, it's not uncommon to walk into a gasthaus and find ash trays on the table and folks smoking next to you while you eat. Like the US, the tide is turning, just a bit slower. Interesting that there's such a strong "green" movement here to protect their trees and wildlife but protecting humans seems to be somewhat on the back burner.
Posted by Sandy and Jeff at Sunday, February 06, 2011