No family visiting for the Thanksgiving weekend so we took off for the Normandy region of France. We planned to do the D-Day beaches and Mont St. Michel. It was a bit cold but a great weekend.

We got up Thanksgiving morning to the first snowfall of the season. We drove in pretty heavy snow the first couple hours but that eventually let up and the drive was non-eventful until we hit Paris. Paris has no orbital road and the shortest way to the highway leading out to the west and Normandy was through the southern part of the city. Our drive was already expected to take seven hours to get to Caen, France but the drive through Paris and the extremely congested traffic there cost us an additional 40 minutes to our expected arrival time.

Once west of Paris the drive went quite smoothly until we were about a half hour from Caen when we ran into snow again. Our plan was to stop at the Pegasus Bridge in Benouville which was just northeast of Caen and that’s what we did. The Pegasus Bridge operation is an incredible story of daring and precision when British forces in Horsa gliders landed in the early morning hours of June 6, 1944 to take control of a vital bridge crossing the Caen Canal just a few miles from the D-Day landing beaches. The museum there in Benouville is excellent, tells the story very well and was the perfect beginning of our D-Day experience.

This is what the Benouville Bridge, which it was known as then, looked like shortly after the operation in 1944. You can see some of the Horsa gliders in the background with their D-Day stripes. They landed at night, in an unpowered glider to within 47 meters of the bridge. British forces totally surprised the Germans and gained control of the bridge in just ten minutes. 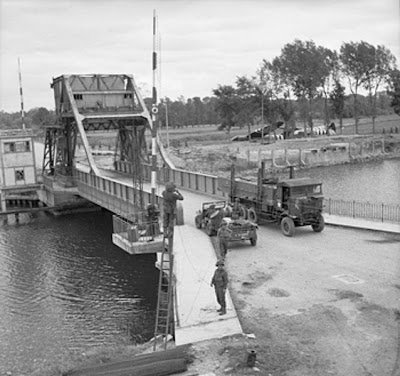 Today, the original bridge, seen here, has been moved to the museum sight, very near where a new replacement bridge has been installed. The Pegasus Bridge was a draw bridge that pivoted up from a single side of the canal. 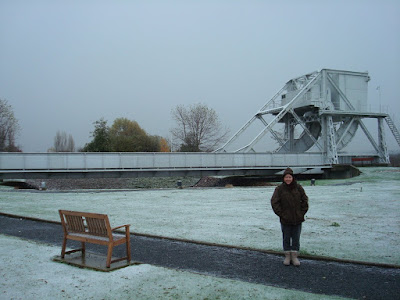 The bridge got it's name from the Pegasus patch worn by the British airborne unit that flew into D-Day in the Horsa gliders and took the bridge. 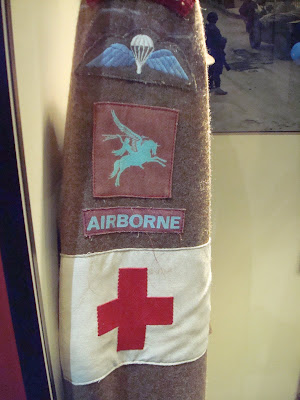 We had planned to drive up to Arromanches to see the Mulberry Harbor and Big Gun Batteries but since it was still snowing we thought it best to head to the hotel in Caen. That turned out to be a good decision since the six mile drive to the hotel took us two and half hours and since the first four miles was completed in ten minutes; the last two miles took us two hours, twenty minutes. The snow had caused severe problems in Caen and the slick roads slowed the traffic to a glacial pace. Happily, although we ran into some serious snow flurries later in the trip, it never again caused any impact on our time.

By the way, we stayed at the Kyriad City Center Hotel in Caen which was very nice. Good price and underground public parking across the street which included a hotel discount. One more, oh, by the way. We don’t know much French so wondered how to pronounce Caen: kān, kŏn? Neither, according the very nice folks at the hotel front desk, as close as I can show it here, kaw.

Friday was our D-Day experience. Jeff had built a nice plan and researched the information we needed at each stop. We drove direct to Omaha Beach, then to the Normandy American Cemetery and Memorial, Pointe du Hoc, German Military Cemetery at La Cambe, Utah Beach and finally Ste. Mere-Eglise. That was a lot of stuff to do in one day and we had just enough time to make a little change in plans when we drove to Bayeux to see the nearly thousand year old Bayeux Tapestry. Back to Caen to the hotel and an evening meal. A truly awesome day complete.

Saturday morning we packed up and drove southeast to the English Channel and Mont St. Michel. We arrived there at 1030. The drive up to this tidal island and the first sight of the cathedral and surrounding village is truly amazing. Luckily, there were very few people already there so we had the place almost to ourselves. The narrow village streets with shops, hotels and restaurants are magnificent but also quite steep. There’s a great audio tour of the abbey with lots of history about the construction of the building and what life was like living there hundreds of years before. We left at 1330 (1:30PM) and started our eight hour drive home.

Here’s a couple of observations. French high speed highways, at least outside of Paris, were very nice; smooth and very light traffic, nothing at all like the heavy German traffic. A good portion of these French high speed highways are toll roads. It cost us about 100 Euros total in tolls to drive out to French coast and back to Germany. French gas stations don’t sell beer, they do sell champagne though.

Following are some of our photos from our trip to the Normandy region of France. Click on the photo to see a larger image.

Of course, we were there during the off season and it certainly showed. All the restaurants, bars and hotels were closed. But, it was nice to be there all by ourselves; a very moving experience to think of the sounds and images of that day. 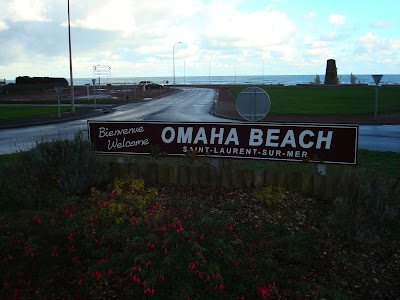 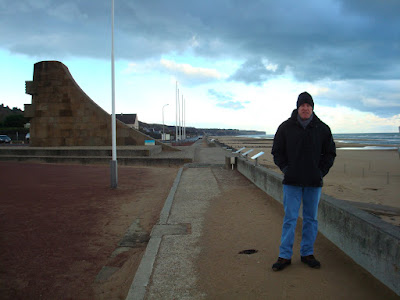 Entry to the Normandy American Cemetery and Memorial. They have a modern, interactive facility that tells the tale of the men that landed on the beaches June 6, 1944. A very impressive presentation. 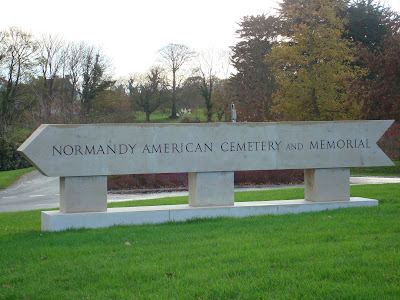 The memorial at the Normandy cemetery. A real inspiring structure. 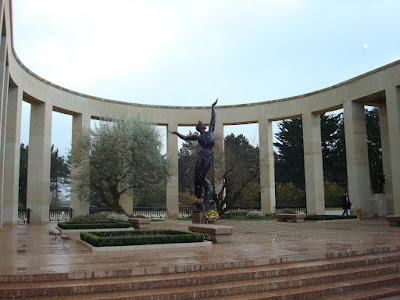 The grave of Colonel Theodore Roosevelt Jr, son of former President, Teddy Roosevelt. Colonel Roosevelt was awarded the Medal of Honor for rallying and leading his troops through intense enemy fire during the first wave of landings on Omaha Beach. He died of a heart attack six weeks later. He's buried next to his brother Quentin who, as a fighter pilot, was killed in 1918 during a World War I dog fight. 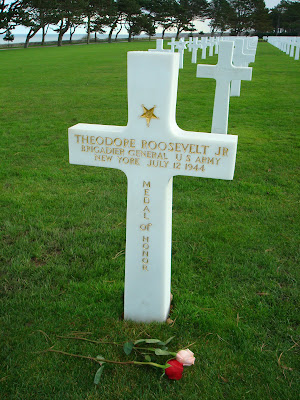 The setting for the Normandy cemetery is beautiful on the bluffs over looking Omaha Beach. The care of the entire facility is impeccable. Although the cemetery is operated by the US government it brings great pride and satisfaction to see the care and respect that the French caretakers give to these men and the cause that they fought for. The 172 acre cemetary contains the graves of 9,387 American service men. A very humbling and proud stop.

Ponte du Hoc was the location of German 155mm guns that, given their placement, would be able to fire upon naval vessels near both Omaha and Utah beach. US Army Rangers scaled the 100 foot cliffs here to gain control of this vital vantage point between the two US landing sights. Navy guns bombarded Ponte du Hoc and you can still see the craters that resulted. 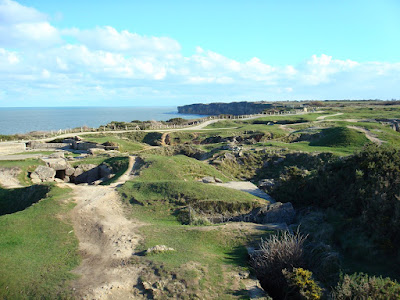 I'm standing in one of the huge bunkers at Pointe du Hoc. 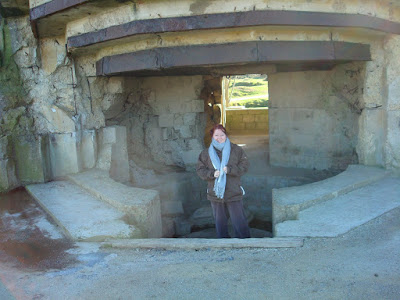 One of the pivot points for the big German guns implacements. When the Rangers took the sight they found that the guns had already been moved rearward to protect them from any possible enemy naval fire. Guess it worked but the Rangers still found and destroyed them. 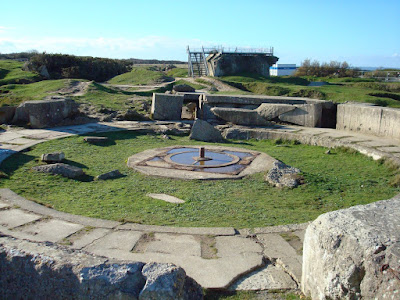 The cemetary at La Cambe holds over 20,000 German dead. Over 30% are unknown. Jeff thinks that's because very soon after the allied landings, German forces were in retreat and unable to immediately recover their dead and wounded. The mound in the middle is a large unknown grave with representative Mother and Father figures on top. 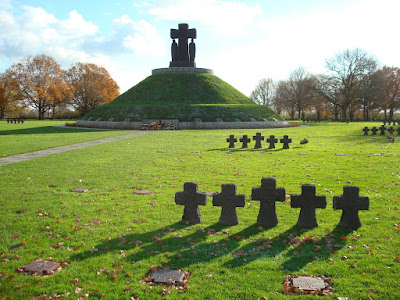 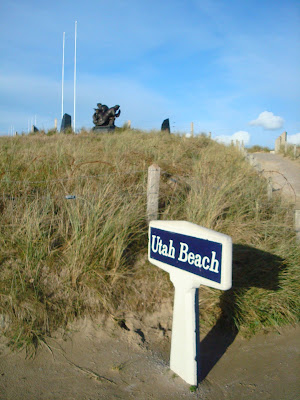 US Navy Memorial at Utah Beach to remember the officers and sailors that took part in the D-Day landing. 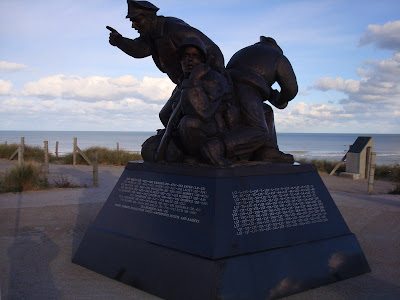 Jeff on Utah Beach. Yeah, it was chilly. 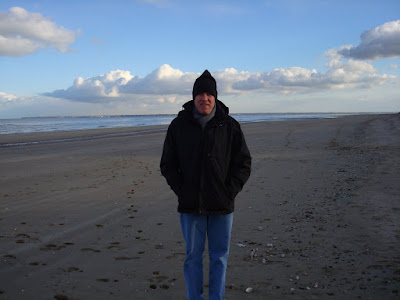 The 82nd Airborne missed their planned jump points on June 6, 1944 and many paratroopers came down in the center of St-Mere-Eglise, which was heavily occupied by the Germans, just a few miles inland from Utah Beach. One particular paratrooper got hung up on the church in the city center. He was the only survivor of those that landed in the town. St-Mere-Eglise keeps a replica of that trapped paratrooper hanging from the church even today. 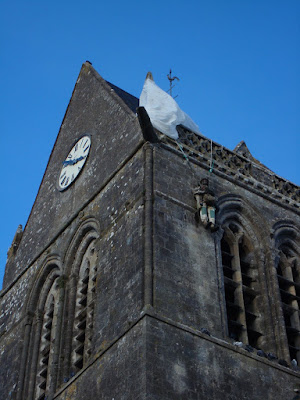 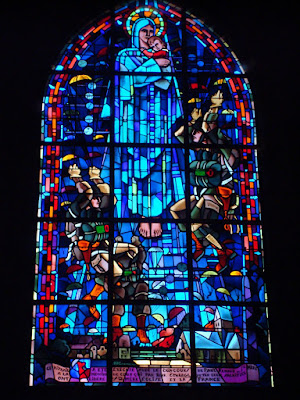 The 25th D-Day anniversary window in the church. Lots of reference to the airborne units that liberated St-Mere-Eglise. 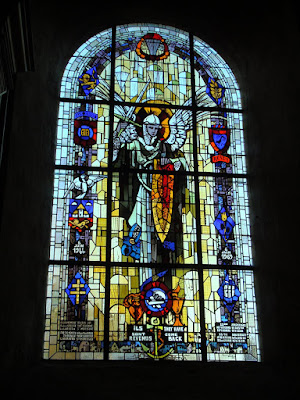 We ended our Friday visits seeing the Bayeux Tapestry, not surprisingly in Bayeux. The tapestry is almost a 1000 years old, 1.5 feet x 224 feet, and depicts the story of William the Conqueror (formerly known as William the Bastard, no kidding) who invaded England and took the crown at the Battle of Hastings in 1066. We're big Great Britain history buffs so this was a really amazing stop. This is just a tiny little part of the tapestry. 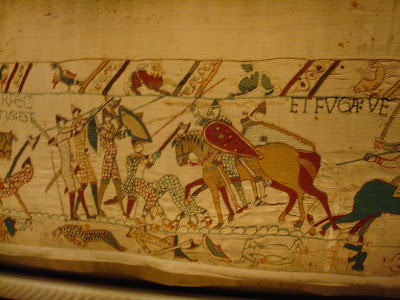 Saturday we were at Mont St. Michel and the only word to descibe it; amazing. 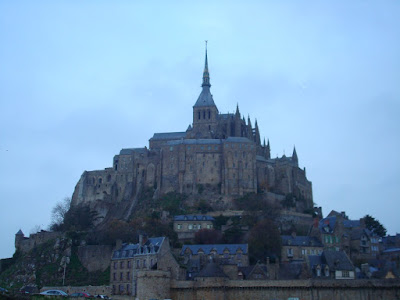 Since Mont St. Michel is a tidal island they have to warn folks about swimming and quicksand. This sign was on the way in. Interesting universal image to warn of quicksand, there in the middle. 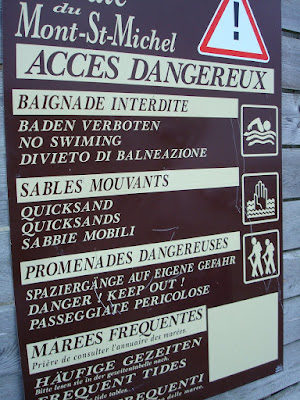 The grand staircase to the Abbey. 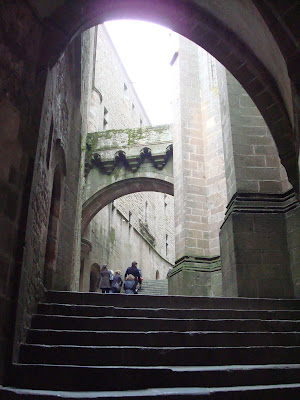 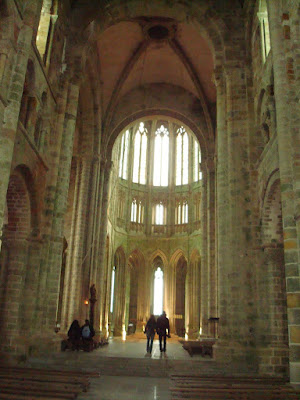 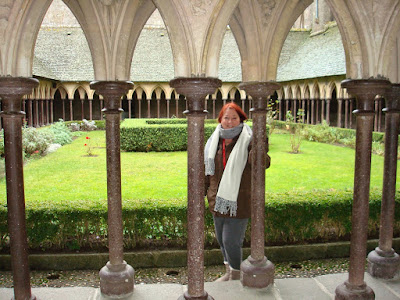 A copy of the Archangel Michael that sits atop of the cathedral spire. The gold plated St. Michael had to be placed on top of the Mont St. Michel steeple using a helicpoter. 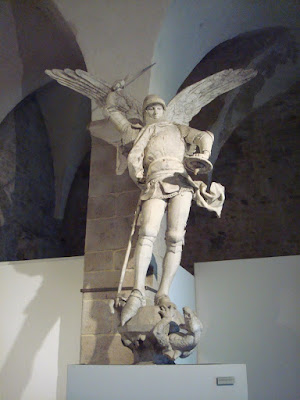 Just before we started our 8 hour drive home. What a great day and an incredible three day trip. 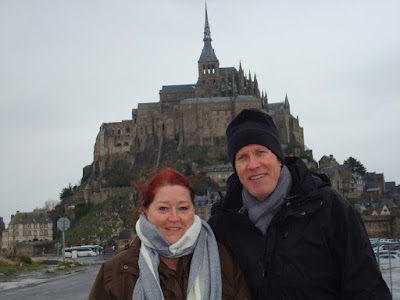 One last observation. We stopped once at a highway rest stop to use the facilities. The women's toilet was a modern, 21st century Turkish toilet, kind of a oxymoron. Very clean. The more things change, the more they stay the same. 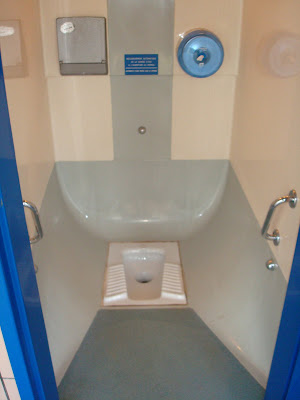